An Australian bride has sparked a furious debate online after revealing her bridesmaids don’t want to spend $380 each clothing for her upcoming wedding.

Taking to a wedding forum, the woman said she had asked her sister and best friend to be her bridesmaids and that they’d need to buy their own dress and shoes.

She said the pair were unhappy over the $380 price tag and complained to her saying they were already paying for the bride’s bachelorette party.

‘They both buy new dresses for different events and shoes and things but are making a big deal about my wedding. All they have to pay for are their shoes and dresses which total $380.

Are the bridesmaids selfish for wanting the bride to pay?

To help, the bride said she offered to put $100 towards their dresses, a solution they were both initially happy with, however, ‘things had changed’.

‘Now I am paying for myself for the bachelorette as well as still being expected to put up to $100 each.’

The woman said she felt put out their arrangement had changed and was upset the duo didn’t seem to ‘understand’ how much she had to spend on her wedding.

‘While that is nothing to do with them, I think they are being a little selfish in expecting me to pay for both.’

She ended her posting asking ‘what should I do?’ – a question that saw hundreds flood the forum to say her expectation her bridesmaids should pay for their dresses was unreasonable. 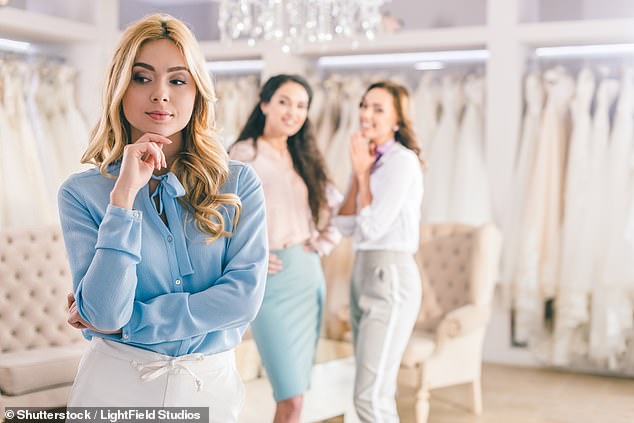 One person wanted to know if the bride-to-be had even asked her bridal party whether or not $380 was a sum they could afford before deciding on their dresses.

‘Did you direct them to throw you a bachelorette/tell them what to do for your bachelorette? Did you ask their budgets on dresses and shoes before selecting them?’ One person asked.

You don’t get to force other people to spend money for something you want for your own purposes.

‘I really think if you want them to wear something specific, you need to pay for it. At the very least you need to ask their budget before imposing a $380 outfit on them.’

A third said they though it was unfair for the bride to assume that because someone has a fulltime job and no kids ‘they are swimming in money!’

‘You chose to get married. They didn’t. Why should they have to come of pocket like that. Your wedding. You pay.’

She ended her posting asking ‘what should I do?’ – a question that saw hundreds flood the forum to say her expectation her bridesmaids should pay for their dresses was unreasonable

Another said: ‘You don’t get to force other people to spend money for something you want for your own purposes that you don’t want to spend yourself.

‘And it really isn’t a good want to treat people you supposedly love and care about the most.’

Commenters on the forum also noted the amount the bride had requested her bridesmaid pay for their clothing wasn’t entirely out of bounds.

‘$380 doesn’t sound like a lot (to me anyway) for a bridesmaid dress and shoes,’ wrote one.

Another said: ‘I think that what they’re spending isn’t unreasonable but if they think it is you have to take that into consideration.

‘If the additional $100 each isn’t in your budget for the bachelorette party then maybe discuss with them about doing something more low key or less cost intensive?’