One hundred Australian Defence Force personnel were on standby to oversee Victoria’s hotel quarantine program – but the state government hired private security firms instead of taking up the offer, bombshell documents reveal.

The Daniel Andrews government is facing mounting criticism over the bungled operation as the state’s coronavirus crisis deepens, with 410 new cases identified on Wednesday and a further 21 deaths.

The hotel quarantine program – in which private contractors allegedly slept with infected travellers – is understood to be responsible for most, if not all cases recorded during Victoria’s second wave.

While Mr Andrews has stood firm on his claims that ADF soldiers weren’t offered to assist in the program, Defence Department records show 100 personnel were ready to enforce quarantine, but they were not utilised.

Documents show the offer was refused because Victoria Police were in the ‘advanced planning stages’ of a quarantine program at the time.

An ADF liaison officer told the federal government Victoria’s quarantine plans ‘do not presently include or require ADF involvement’. 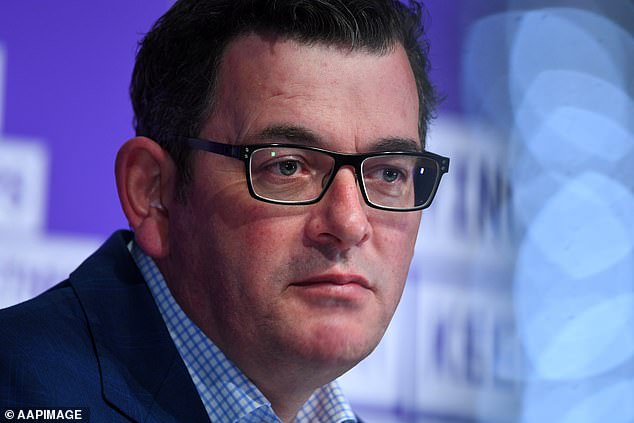 Daniel Andrews’ government is facing mounting criticism as the state’s coronavirus crisis deepens, with 410 new cases identified on Wednesday and a further 21 deaths

The National Cabinet mandated hotel quarantine on March 26, and Emergency Management Victoria Commissioner Andrew Crisp chaired a meeting the following day when he called for private security firms to manage the program.

Department of Jobs, Precincts and Regions secretary Simon Phemister told a parliamentary hearing on Wednesday the meeting was ‘pivotal’ in the decision to use security guards.

In the weeks to follow, Defence was ‘repeatedly’ told the hotel quarantine program was being well managed.

Both Queensland and New South Wales took up the ADF’s offer, and neither have reported any major breaches in the mandatory quarantine program.

On April 2, five ADF staff were deployed to assist in Victoria’s program without warning, but they were reportedly tasked with administration jobs. 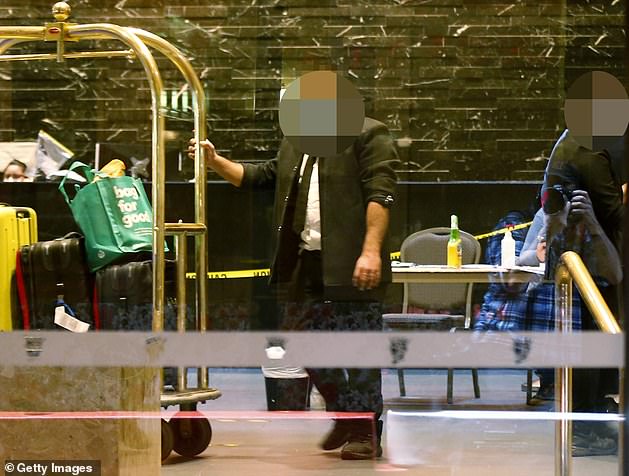 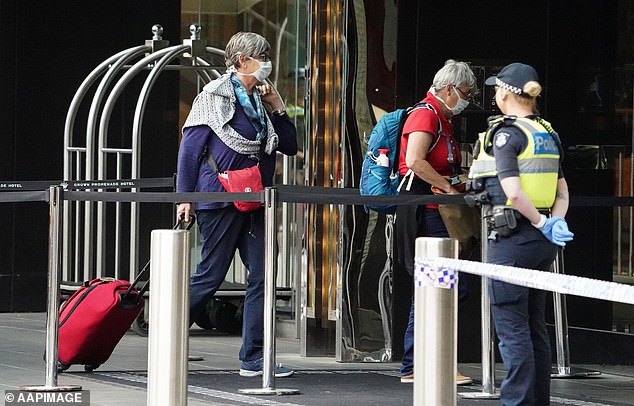 The request was almost immediately approved by the federal government, but Mr Crisp never followed through and withdrew the request the very next day.

Meanwhile Mr Andrews told a parliamentary inquiry into the bungled program that his government never rejected the help of ADF officers.

‘ADF support has been provided in very limited circumstances in NSW, not to provide security, as such, but to provide transport from the airport to hotels,’ he reasoned.

‘It is fundamentally incorrect to assert that there were hundreds of ADF staff on offer and somehow, someone said no. That’s just not, in my judgement, accurate.’

Premier Daniel Andrews used his daily briefing on Wednesday to take a swipe at federal Defence Minister Linda Reynolds, who claimed Victoria knocked back an offer to have Australian Defence Force help with the state’s hotel quarantine scheme.

The premier told an inquiry on Tuesday the ADF never offered to guard the hotels.

The botched program, which used private security companies, was the catalyst for Victoria’s second wave.

‘I don’t know the federal defence minister. I don’t deal with her. I deal with the prime minister,’ Mr Andrews said.

The retort came after the defence minister released a statement saying ADF support was offered to Victoria multiple times.

‘The ADF was consistently advised that its assistance was not required for any ”public-facing roles” in Victoria,’ Senator Reynolds said. 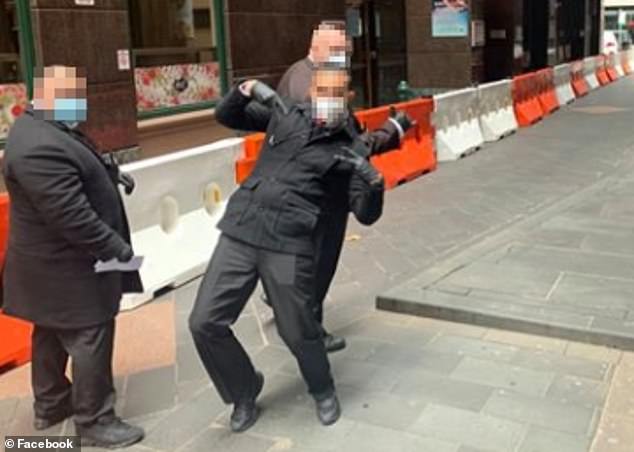 She said in a statement: ‘ADF officials asked whether Victorian authorities required assistance with its mandatory quarantine system on multiple occasions.

‘No request for quarantine support was subsequently received from Victoria at that time.’

The statement also made clear that ADF troops were deployed in both Queensland and New South Wales to guard returned travellers as well as transport them. 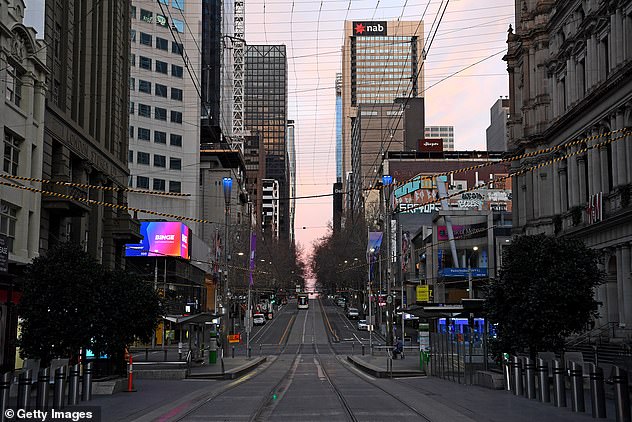 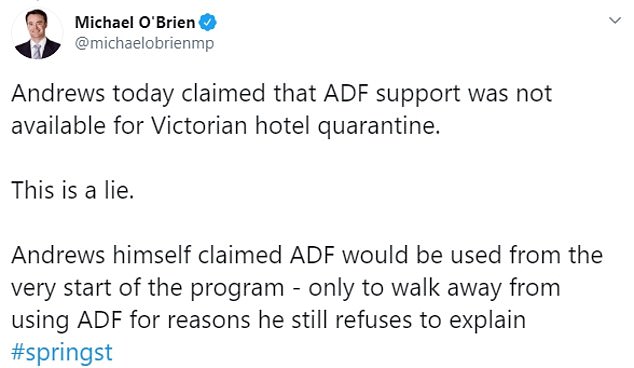 ‘Andrews himself claimed ADF would be used from the very start of the program,’ he wrote on Twitter.

Mr O’Brien shared an image of a statement released by the premier on 27 March – when quarantine program was announced – which said: ‘It has also been agreed that the Australian Defence Force will be engaged to support the implementation of these arrangements.’

During the inquiry, the premier was also asked whose idea it was to man hotel quarantine with private security guards instead of the police and army troops.

‘It was essentially an extension of a program that we had already stood up. Nothing more, nothing less,’ he said.

The premier was asked if he regrets ‘the decision to employ private security guards in hotel quarantine’.

He replied: ‘No-one wanted a second wave of the virus. But none of us have the luxury of going back in time.’

Department of Defence hits back at Daniel Andrews: Full statement

Below is the  Department of Defence’s full statement on ADF support:

Throughout the pandemic the Australian Defence Force (ADF) has been postured to respond to requests for support from the states and territories at very short notice.

From 21 March 2020, ADF planning teams were established in every state and territory to rapidly facilitate any requests for support.

Following the Prime Minister’s offer on 27 March 2020 for ADF support to states and territories with the new mandatory 14-day quarantine period for international arrivals, the ADF discussed requirements with relevant state and territory authorities.

On 28 March 2020, Victorian authorities advised that Victoria was not seeking ADF assistance with mandatory quarantine arrangements. The ADF was consistently advised that its assistance was not required for any ‘public facing roles’ in Victoria.

ADF officials asked whether Victorian authorities required assistance with its mandatory quarantine system on multiple occasions. No request for quarantine support was subsequently received from Victoria at that time.

Defence agreed to requests for support to quarantine compliance from Queensland and NSW on 28 March.

On 14 April 2020, the ADF shared observations on best practice quarantine compliance monitoring operations with all state and territory police commissioners, including the success of interagency operations between the ADF and NSW Police.

On 3 August 2020, the ADF agreed to provide up to 50 personnel to support Western Australian authorities with support to hotel quarantine.

Mr Andrews was the first witness called at the second sitting of the Victorian Public Accounts and Estimates Committee’s COVID-19 Inquiry on Tuesday.

Victoria’s Chief Health Officer Brett Sutton has previously said it is conceivable that all Victoria’s second-wave cases arose from security employed at hotels unwittingly carrying the virus out of quarantine.

The debacle first came to public attention on May 27 when the infection of a security guard working at the Rydges on Swanston hotel in Carlton, inner-north Melbourne was announced.

The following week, on June 6, the spread of the deadly virus appeared under control as zero cases were recorded for the first time since March 5.

But on June 17 an outbreak erupted at the Stamford Plaza in Melbourne’s CBD and 21 new cases were recorded across the state.

On Tuesday Victoria recorded 19 deaths and 331 cases of coronavirus, taking the state’s COVID-19 death toll to 247 and the national figure to 332.

New daily case numbers have declined in Victoria since the peak of 725 on 5 August.

Of the state’s 267 fatalities, all but 20 of which have occurred since July 5. 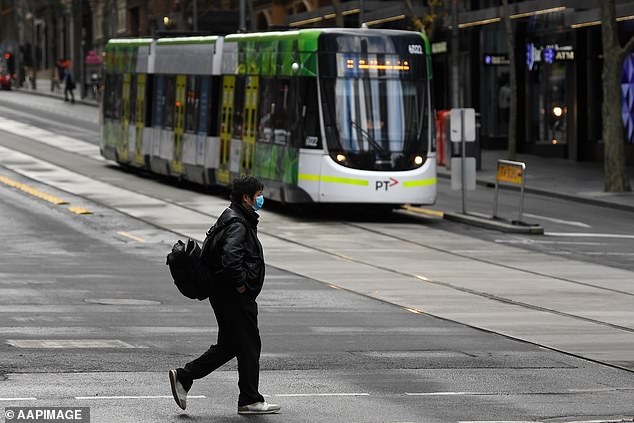 * March 27 – National cabinet decides returned travellers will be subject to mandatory 14-day quarantine ‘at designated facilities, for example, in a hotel’.

* May 27 – Outbreak at Rydges on Swanston first identified.

* May 31 – Victoria’s state of emergency extended for three weeks ahead of stage-three restrictions easing the next day. Four new COVID-19 cases, 74 active cases.

* June 26 – Concerns grow about the program after it’s revealed 30 per cent of travellers are refusing tests. Confirmed COVID-19 cases continue to rise.

* June 29 – Hot spot suburbs in Melbourne’s north and north-west return to lockdown and all international flights into the city are put on hold for two weeks.

* July 6 – The Victoria-NSW border shuts for the first time in a century.