‘Quiet Australians lead to homes on fire’: Father sends a powerful message to Scott Morrison using the remains of his burnt-out home after a bushfire tore through it

An Aussie dad has sent a compelling message to the Prime Minister after his home was destroyed during the recent bushfires.

The image of a burnt out house with red writing spray-painted over it calls out the current bushfire crisis and questions Prime Minister Scott Morrison.

The words ‘F.U. Sco Mo’ are visible in the wreckage.

Pictured: The image of an Aussie father’s burned home where he sends a message to Prime Minister Scott Morrison

Scott Morrison’s office said the federal government ‘is not responsible’ for action on the front line and that the issue comes down to each state.

‘We simply give them the money so they are prepared for the new season,’ a spokesman said.

New South Wales has seen about 100 fires blazing around the state in the past week.

Morrison has previously discussed the fires, offering his thoughts and prayers as well as suggesting victims ‘cheer on’ the national cricket team for comfort.

The suggestion was widely criticised by many Australians who are calling for urgent action on climate change.

About 1,000 firefighters have been tackling blazes that range from the Gold Coast to Cape York.

The image, which was posted to the Australia Reddit thread, mentions a ‘climate catastrophe’ and that ‘Quiet Aussies lead to homes on fire’.

Other Reddit users also mocked the advice given by Morrison, with one saying: ‘She’ll be right mate – the cricket team is here to cheer you up this summer.’

Another user said: ‘I think that photograph should be immortalised for the future generations to see the mass insanity taking place today.’ 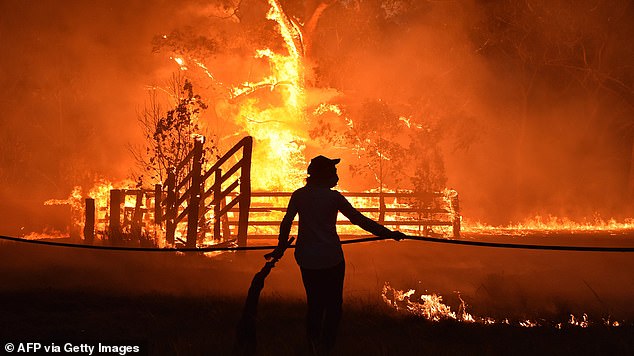