A mysterious Australian plane found crashed at the end of a remote runway in Papua New Guinea has now been linked to an alleged attempt to import over $80million worth of cocaine.

Australian Federal Police said a Cessna loaded with more than 500kg of cocaine took off from a remote airstrip at near Port Moresby in PNG on July 26 but crashed soon after.

Police say the crash may have been inevitable thanks to the ‘greed’ of the alleged smugglers, who loaded the plane with so much cocaine it couldn’t fly.

The failed operation allegedly involved five members of a Melbourne-based criminal syndicate with links to Italian organised crime, who have all now been charged. 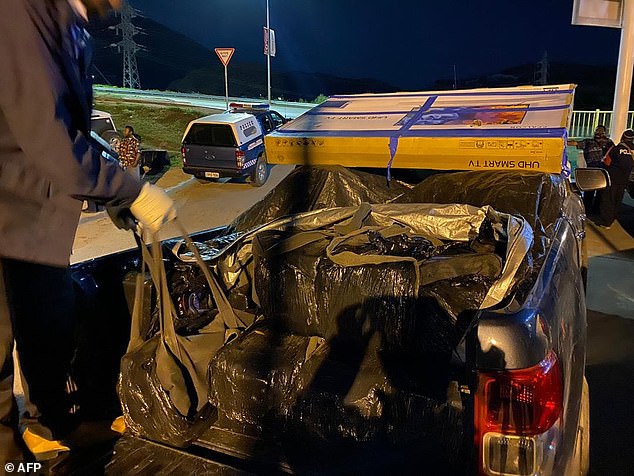 Over 500kg of cocaine believed to be connected to the plane crash was found days later by Papua New Guinea authorities (pictured), police allege 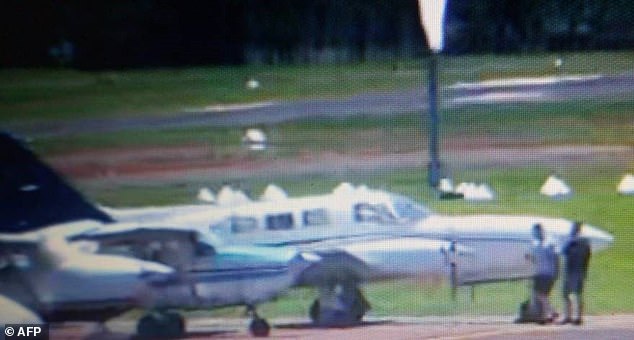 The light aircraft is said to have taken off from Mareeba Airfield in Queensland earlier that morning and travelled at under 3,000 feet to avoid radar detection.

The Australian pilot, the sixth member of the group, allegedly arrived at the Australian Consulate in PNG on July 28 where he was arrested and charged with immigration offences and remains in the country.

The five other men were arrested in Queensland and Victoria by Australian state police on July 26.

It is alleged the men, aged 31, 36, 31, 33 and 61, conspired to transport the drugs and travelled between travelled from Melbourne and Sydney to Queensland between 19 and 25 July to carry out the operation.

If convicted, all five men could face life in prison. 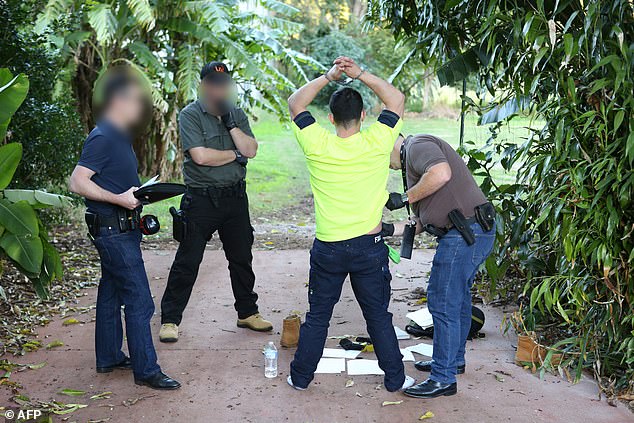 Australian Federal Police said they have arrested five members of Melbourne-based criminal syndicate with links to Italian organised crime (pictured, one of the members being arrested) 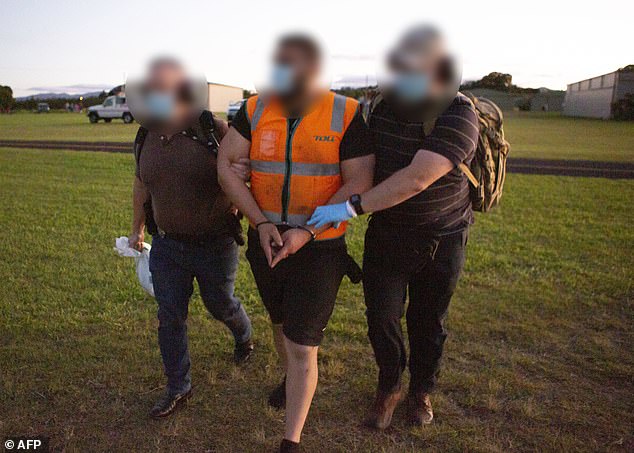 If convicted of the drug offences, all five men could face life in prison (pictured, one of the alleged offenders

PNG authorities found the crashed Australian plane late last month but found no pilot or any cargo in sight.

The country’s prime minister, James Marape, said at the time he suspected it was used for drug trafficking and asked Australian authorities to help uncover the mystery.

Photos from inside the plane show several hidden compartments covered up with boards where the drugs could have been stowed. 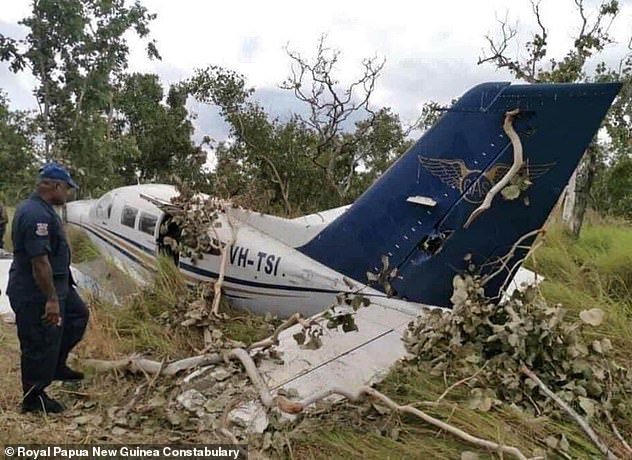 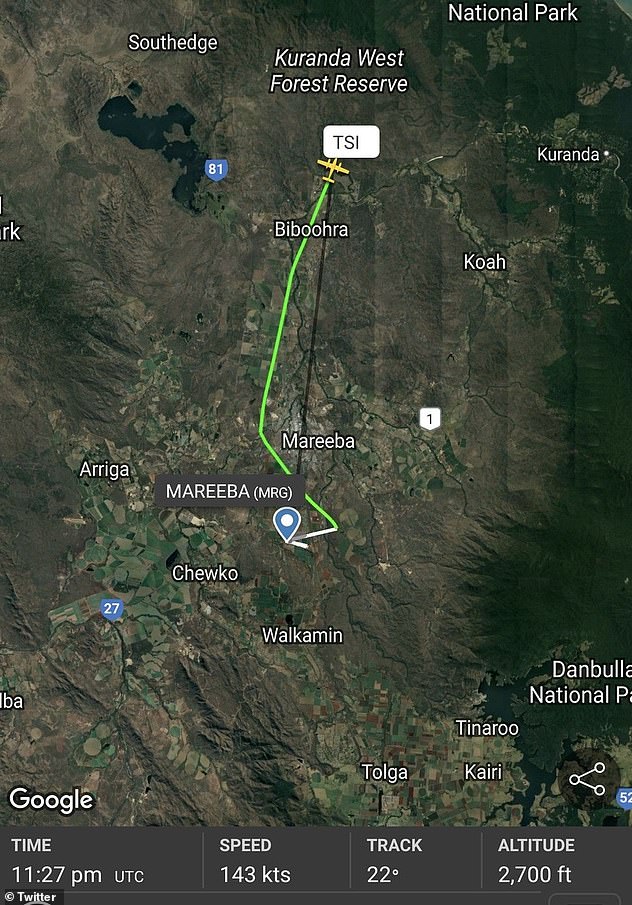 The plane took off from the remote runway but quickly crashed out, possibly due to the weight of the cocaine

On July 31, Royal Papua New Guinea Constabulary located 500kg of cocaine that authorities believe was on the plane. The drugs are still being analysed and a number of men are speaking with local authorities.

As part of the AFP investigation, Criminal Assets Confiscation Taskforce seized more than $3.5million worth of fiances and assets believed to be under the control of a syndicate member.

A 31-year-old man from Maribyrnong, in Melbourne, faced Cairns Magistrates Court on 27 July charged with offences including importing commercial quantities of border controlled drugs and laundering over $1million. 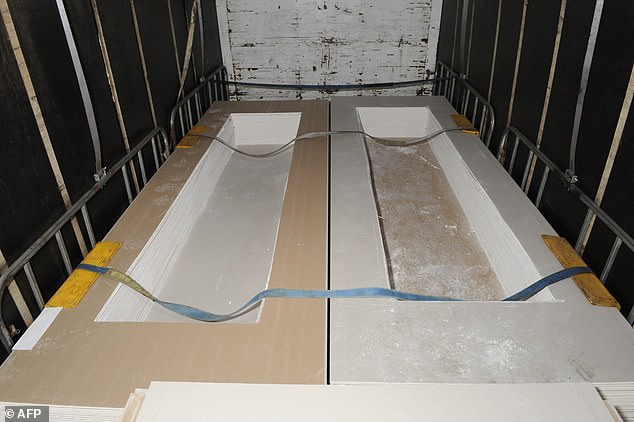 AFP Deputy Commissioner Ian McCartney said the arrests were the result of a two-year investigation involving a total of six agencies.

‘These arrests prove no matter how sophisticated or opportunistic organised crime’s attempts are, or the methods they use, law enforcement is keeping pace and causing maximum damage to these criminal ventures,’ he said.

‘With current interstate travel restrictions in place due to COVID-19, the attempt to import illicit drugs into Australia shows how opportunistic and greedy organised crime can be,’ he said.

‘Australian law enforcement remains committed to working collectively to protect Australia, which is especially important now, due to the ongoing impact of the pandemic on the community.’ 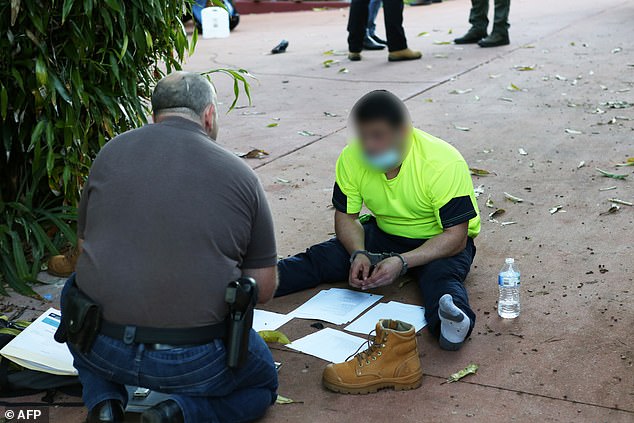 AFP Deputy Commissioner Ian McCartney said the arrests were the result of a two-year investigation involving a total of six agencies (pictured, one of the men arrested)