Only in Australia! Legend polishes off a cold can of beer while wakeboarding through tropical cyclone flash floods

A wild tropical cyclone is generally enough to keep people indoors, but not one avid wakeboarder.

Michael Dunk from the far-north coast of Queensland ignored the impending Cyclone Owen and the flash flooding dubbed ‘Freaky Friday’ for his own version – a ‘frothie’ Friday.

Trailing behind a truck and skimboarding in puddles left by Friday morning’s flash flooding, Dunk can be seen sipping a beer.

In the video, uploaded to Instagram on Friday afternoon, a bare-chested Dunk can be seen coasting from side-to-side with one hand on a rope handle and another firmly grasping his beer.

Accompanying the video is the caption: ‘It (sic) friday! Time for a few frothies!’

After his first sip from the can, Dunk appears to lose his balance, before regaining his footing and going for another drink.

The footage was shot on the side of a gravel road in Airlie Beach on the Whitsundays, or as Dunk refers to them as, the ‘wetsundays’. 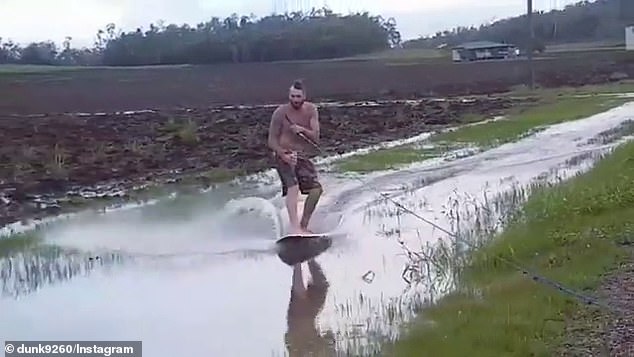 His water adventure comes as the northern portion of the state endures a category 2 tropical cyclone, which was downgraded from a category 3 early Saturday morning.

Cyclone Owen was forecast to strike the far-north on Friday, but dwindling winds brought the severity of the devastating cyclone down a notch and slowed its progress.

Meanwhile, the eastern coast of the state is enduring sporadic flash floods and heavy rain.

Most of the rainfall came on Friday, with a smattering on Saturday morning in the Whitsundays.