By Sam McPhee and Levi Parsons For Daily Mail Australia

A western Sydney man has filmed himself embarrassingly lecturing ‘un-Australian’ police and blasting ‘Waltzing Matilda’ on his car speakers while parked at a BP petrol station.

The man, who posted the footage to TikTok, was being questioned by police before going on a nonsensical diatribe about changing his address, accusing them of needing counselling and refusing to get out of his car.

The female officers tell him he ‘can’t change his address to any thing you’d like’ if you don’t reside there, before the man goes off on a rant.

‘You’re just looking for an excuse to harass citizens. This is nothing to do with health or Covid,’ he yells.

‘This is an embarrassment. Our glorious Anzacs died for this flag, for the freedom of this country.’

When officers try to calm the situation, the agitated man says ‘no I’m talking’.

‘I’m going to give you a lecture in politics because you guys don’t understand what Australian values are, your behaviour is un-Australian.’

He then accuses the officers of swearing in public, claiming to be highly offended by their language.

‘Go back to the police station. Maybe see a psychologist or counsellor,’ the man said.

‘Was this a very hard event for you to handle? Maybe get some sick leave?

‘If it’s too hot honey get out of the kitchen.’

Both of the officers appear visibly frustrated by the man’s antics, and the confrontation becomes even more intense when he accuses the pair of being ‘racist.’

Pictured: A western Sydney man has filmed himself embarrassingly lecturing ‘un-Australian’ police and blasting ‘Waltzing Matilda’ on his car speakers while parked at a BP petrol station 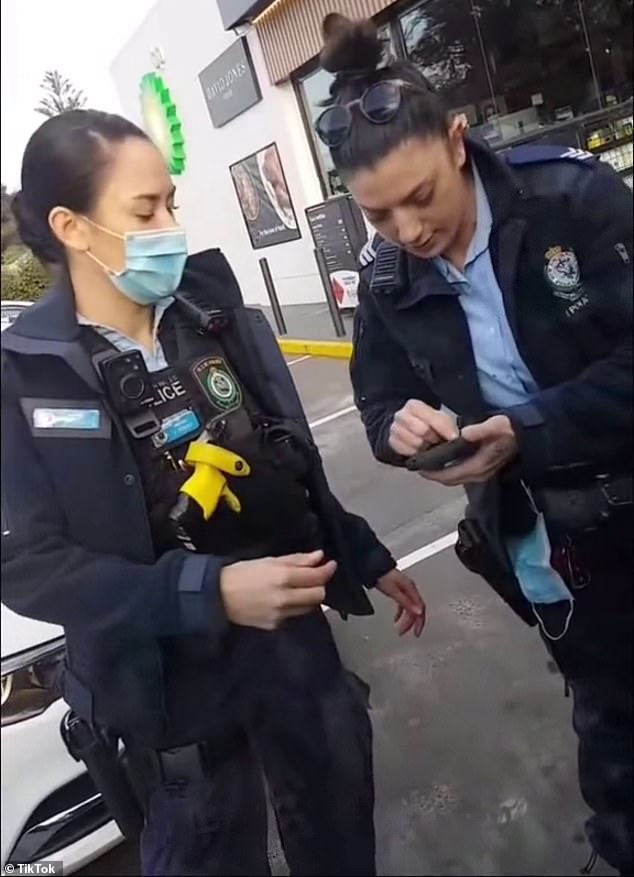 Pictured: The female officers (pictured) tell him he ‘can’t change his address to any thing you’d like’ if you don’t reside there, before the man goes off on a rant

‘Is that a racial slur?’ he says to the officer.

In a second video, also posted the social media platform, officers direct the man to open his door.

‘You came up to the car with your hand on your gun. You were holding your gun. Were you gonna shoot me? You wanna shoot me now huh?’ 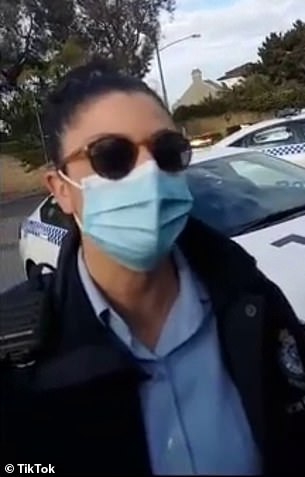 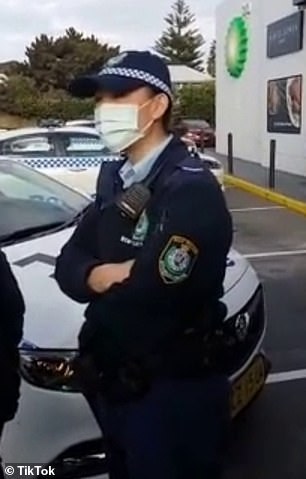 With the man still refusing to open the door despite a contingent of four police officers surrounding his vehicle, he then blasted the iconic Australian bush ballad Waltzing Matilda.

At the end of the bizarre video one of officers can be seen smiling in amusement at the strange behaviour of the man.

Daily Mail Australia have contacted NSW Police for comment on the incident but were not able to ascertain if the man has been charged.