By Alice Murphy and Carina Stathis For Daily Mail Australia

An Australian mother who discovered bags of avocadoes discounted to $1 in Coles has been hailed the bargain hunter of the century by delighted shoppers.

After spotting the perfectly ripe, cut-price produce, the woman posted a photo in a Facebook budgeting group with the caption: ‘Coles has gone mad – $1 bag.’

The bags were originally $9.90 but have been marked down to 99c for ‘quick sale’, according to the label – that’s a remarkable reduction of 90 percent.

It’s not clear which store the avocadoes were found in but the mother lives near Hawthorn, six kilometres east of Melbourne CBD.

The bags (pictured) were originally $9.90 but have been marked down to 99c for ‘quick sale’, according to the label – that’s a remarkable reduction of 90 percent

Her photo has drawn dozens of frenzied responses since it was shared Thursday morning, with many begging to know the supermarket location so they can stock up on their ‘favourite’ fruit for a fraction of the usual cost.

‘That’s what dreams are made of!’ one woman replied.

‘Oh man…. I love avocadoes. Wish I could bag a bargain like this,’ said a second.

And it’s not the only impressive bargain spotted in an Australian supermarket this week.

On Tuesday, a shopper called Jordan picked up $145 worth of meat and pre-packaged meals for just $35 at Woolworths in Rosemeadow, 60 kilometres southwest of Sydney CBD.

He bought 23 packets of food and saved an impressive $109.30 thanks to clearance discounts.

Shoppers have found similar discounts by shopping after 7pm, but Jordan said he scored the budget buys at 5pm. 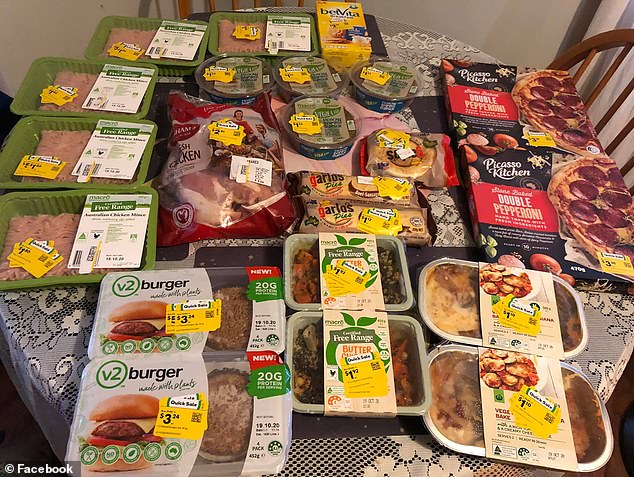 Each packet had been discounted repeatedly in order to sell the food faster, clearing it from shelves to make room for new stock.