A mother has won praise for hiding an incredible birthday spread inside her six-year-old’s school lunchbox.

Determined to make the day memorable, she filled her son’s lunchbox with miniature balloons and turned his peanut butter sandwich into a makeshift cake with a candle and sprinkles.

The mum stuck gift bows on individual plastic containers and fixed a birthday napkin to the lid of the box to surprise her little boy when he opened it up.

Photos of her efforts, which have racked up more than 2,500 ‘likes’ since they were posted to an Australian Facebook group, drew delighted responses from parents who said they could ‘feel’ the little boy’s excitement just from looking at the pictures. 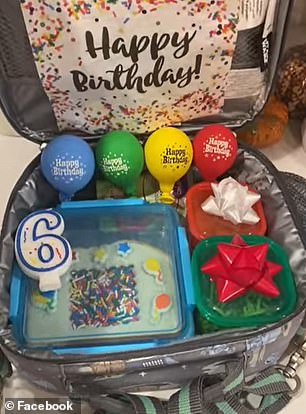 Another added: ‘I’d love to have seen his reaction when he opened this.’

Others called it ‘adorable’, ‘brilliant’ and a ‘perfect way’ to make a birthday special even when it falls on a weekday.

And it’s not the first elaborate lunchbox to make headlines this year.

Last month, the parents of an eight-year-old boy sparked lively debate for giving their son lobster tail and candied pecans in his lunchbox, as he ‘requested’.

In a post uploaded to a Facebook community group, the boy’s father shared a photo of the lavish lunch which included lobster salad with cranberries, blueberries and nuts, three gourmet KitKat bars and chunks of orange and white peach.

‘Hi again! My wife is killing it for our son. He requested lobster,’ he wrote.

‘After this picture was taken she removed the shell and sliced the lobster tail. It is meant to be served cold.’

The decadent spread, which had racked up 1,600 ‘likes’ less than 24 hours after it was shared online, sparked thousands of passionate responses.

While some felt it was over the top, most praised the mum for exposing her son to sophisticated flavours and broadening his understanding of food. 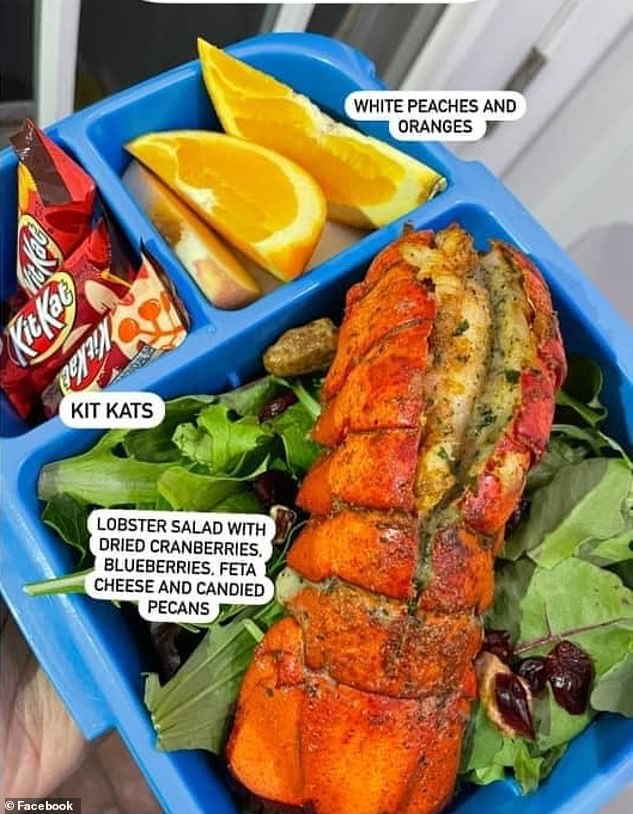 ‘Dear Lord! I want rich parents to feed me lobster for lunch,’ one woman wrote.

A second said: ‘My daughter had this same lunch last week, but muffins instead of the KitKats and instead of lobster, peanut butter and jelly.’

Despite a few sarcastic digs, the lunch won praise from the majority of the group.

‘I love this. Sometimes my darlings have a desire for the not so normal for lunch, and we embrace it. Your wife is doing great!’ one woman wrote.

Another added: ‘This looks amazing, you did a great job. Shrug off the haters. They don’t count! All I see in this pic is an expression of love for you son.’

Others begged the mother to come and cook for their kids as well.

‘What the hell, we’re dying in processed quick fixes here. I can hardly cook and don’t have time. You’re doing great, but just a small bit jealous!,’ one woman said.