Mothers who have been stockpiling toilet paper since the coronavirus outbreak are showing off their huge stashes on social media – as supermarkets bring back its shopping restrictions nationwide following a spike in panic buying in Melbourne.

From Friday, shoppers can only buy one packet of toilet paper at Coles, while Woolworths customers have a two-limit purchase.

The shock announcement comes after both supermarket giants were forced to reintroduced shopping limits on essential products in Victoria.

Despite the restrictions, super-organised bulk buyers revealed in a Facebook group they have been preparing themselves after struggling to get their hands on toilet paper during the coronavirus isolation in Australia.

Supermarkets bring back its restrictions

The announcement comes after both supermarket giants reintroduced shopping limits on products in Victoria following a spike in panic buying.

‘Who here has a toilet paper stockpile? Surely I’m not the only one. Since the crazies took all the loo paper a few months ago, I have actually started to hoard it now. I currently have 13 packs of loo paper – making that 232 rolls,’ one woman said.

Many shoppers responded to the thread, admitting they have been bulk buying toilet paper over the weeks, while others said they have been preparing their fully-stocked cupboards or spare room long before the COVID-19 outbreak.

‘I’ve been buying a 20-pack every week instead of every fortnight so I’ve got a little bit of stashed,’ one woman said.

Another mother said: ‘I’m starting to buy an extra packet of toilet paper each time I go shopping, waiting for the second wave to hit.’

Some shoppers revealed they started their toilet paper stockpiling because they didn’t want to line up at 6am again.

While one mother said she had no choice but to start a stockpile for her family-of-six after she struggled to get her hands on basic items during the isolation. 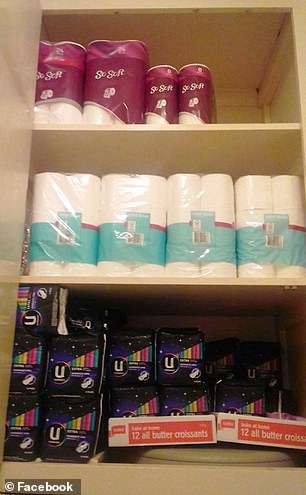 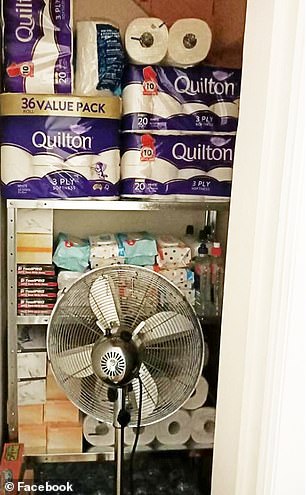 ‘When everyone started panic buying, it was very hard for me to get anything. I was going to the shop every day just to get milk. So I now have a stockpile,’ she said.

‘I bought enough [toilet paper] for a fortnight every week for a few weeks. I didn’t go out buying five packs at once though. And with three girls in the house, I now have a couple of months supply of pads.’

Other women revealed they bulk buy sanitary products such as pads or tampons every time it goes on sale for half price.

‘I have to say when women’s sanitary products are on sale… It’s a great time to buy extras. They are costly at the best of times for women. So when they are on sale at under $3 a pack, I say buy, buy, buy. Having to pay [full price] is a joke,’ one said.

Many ‘couldn’t agree more’, saying ‘it’s only common sense to bulk buy’ when pads are discounted by up to 50 per cent.

‘Me and my family have been doing this for years. We have a garden shed full of toiletries. We never buy when it’s full price, always when it’s half price which means you get twice as much,’ one mother said.