Sexual abuse survivor Grace Tame has accused Scott Morrison of making a crass comment in her ear after her Australian of the Year acceptance speech.

The 26-year-old, who was repeatedly raped by her 58-year-old math teacher when she was just 15, won the award in January for raising awareness about the impact of sexual violence.

In her emotional speech at the National Arboretum in Canberra, Ms Tame spoke about the abuse she suffered and urged survivors to share their stories.

‘I remember him saying, ”Don’t make a sound.” Well, hear me now, using my voice amongst a chorus of voices that will not be silenced,’ she said of her abuser.

In a podcast with The Betoota Advocate, Ms Tame revealed what the prime minister told her after the speech.

‘Do you know what he said to me, right after I finished that speech and we’re in front of a wall of media? I sh** you not, he leant over and right in my ear he goes ”Well, gee, I bet it felt good to get that out”,’ she said.

Ms Tame said the comment was a ‘shocker’ and said even her manager’s mother, a 90-year-old lifelong Liberal voter, condemned it.

She has previously been fiercely critical of the prime minister regarding his handling of sexual assault allegations.

After Mr Morrison revealed his wife Jenny urged him to consider the issue of former liberal staffer Brittany Higgins’ alleged rape from the point of view of a father, Ms Tame said: ‘It shouldn’t take having children to have a conscience’.

In Question Time in Parliament on Monday, Labor shadow minister for women Tanya Plibersek asked the prime minister to confirm what he said to Ms Tame.

Mr Morrison said he couldn’t remember his exact words but insisted he was only trying to tell Ms Tame how brave she was.

He said: ‘I would agree it was, indeed, a very brave speech, I can’t recall the exact words I used, but I wouldn’t question that in any way shape or form, what Tame has said. 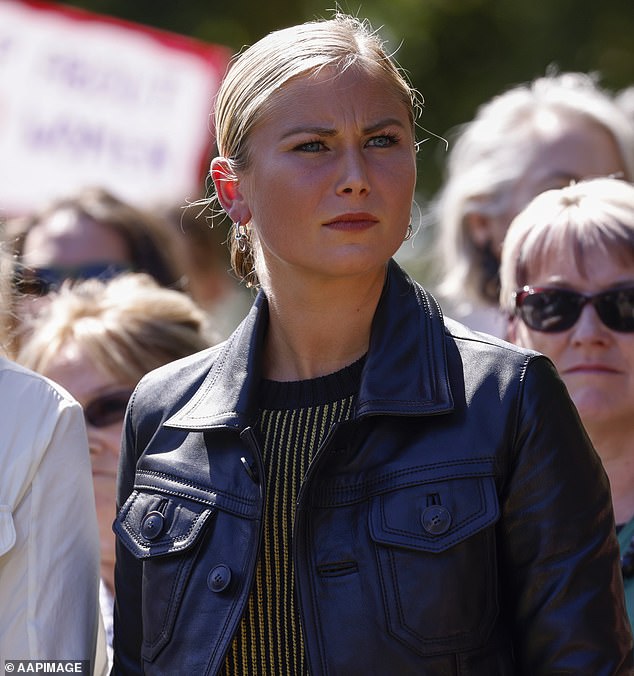 Ms Tame (pictured at a women’s march in March) said the comment was a ‘shocker’ and said even her manager’s mother, a 90-year-old lifelong Liberal voter, condemned it

‘That is roughly my recollection. That was a very brave statement. That is exactly what I meant when I said that to her on that occasion.

‘It was a very proud moment for her and her great struggle and challenge over a long period of time and what she did on that occasion was speak with a very strong voice about what had occurred to her.

‘I think in raising her voice in that way, it would have been great to so many victims of sexual abuse and harassment around the country.

Ms Tame was just 15 when she was suffering from anorexia and became the sexual target of her maths teacher, more than 40 years her senior.

She had first confided in her abuser about when she was molested at the tender age of six by an older child, hoping for help and guidance. 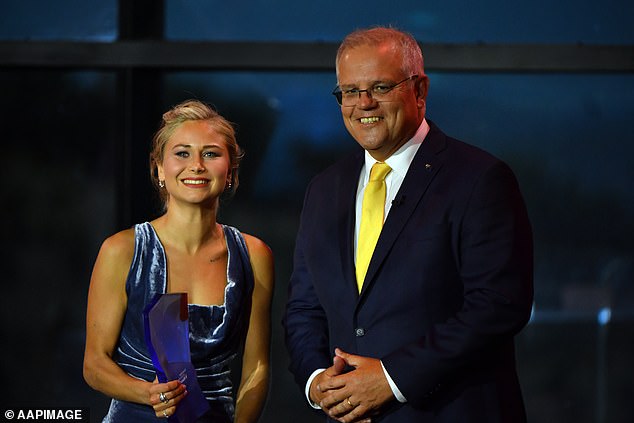 Telling him about when an older child had forced her into a cupboard and told her to undress before she was molested, the predator then saw an opportunity.

‘He then introduced the actual sexual abuse by recreating that scene that I had described to him of my childhood trauma,’ she recalled.

The abuser locked Ms Tame in a cupboard at Hobart’s elite St Michael’s Collegiate Girls’ School where he then sexually molested her for the first time.

He then groomed Ms Tame and exposed her to films which glorified relationships between young women and older men.

He would also isolate her from her family and friends saying she would overcome anorexia alone.

‘He would be showering me with praise, putting me up on a pedestal. But if ever I got too much confidence or I was building enough strength to potentially see the abuse for what it was, he would take me down, he would just tear shreds off me.

‘I remember I was really upset and I asked him, ”do you think I look fat?” And he looked me up and down. He said, ”you could do with some more exercise.”

A brave Ms Tame then reported the rapes to the school and to the police.

The abuser, who was found in possession of 28 pieces of child pornography, was locked up for two-and-a-half years. 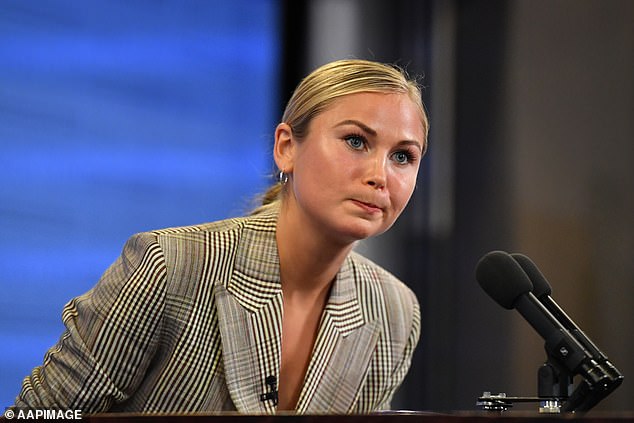 Grace Tame has been a passionate and articulate speaker on sexual abuse reforms. She is pictured addressing the National Press Club in March, 2021