Novak Djokovic today demanded that ‘drunk’ tennis fans who were shouting jibes at him while wearing Where’s Wally costumes be kicked out of the Australian Open stadium.

Australian tennis fans roared whenever Murray lost a point in an attempt to distract the Briton during the match.

But Murray was left unfazed, and won an extraordinary rally where he defended four smashes, with the British player taunting the crowd by raising raising his hand to his ears as he shouted ‘What?’ – while Kokkinakis smashed his racquet to the ground in anger.

Tempers also flared during Djokovic’s match against French player Enzo Couacaud, with the Serbian player shouting at the umpire to remove fans from the stadium.

Tempers flared during Djokovic’s match against French player Enzo Couacaud, with the Serbian player shouting at the umpire to remove fans from the stadium 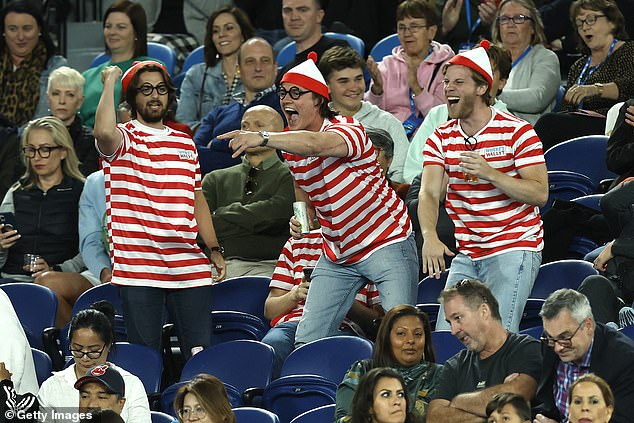 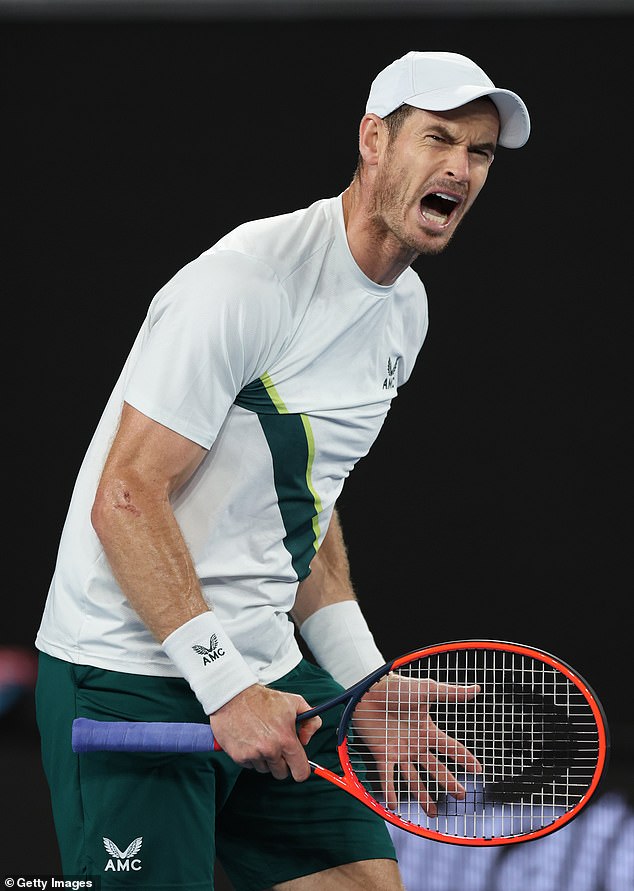 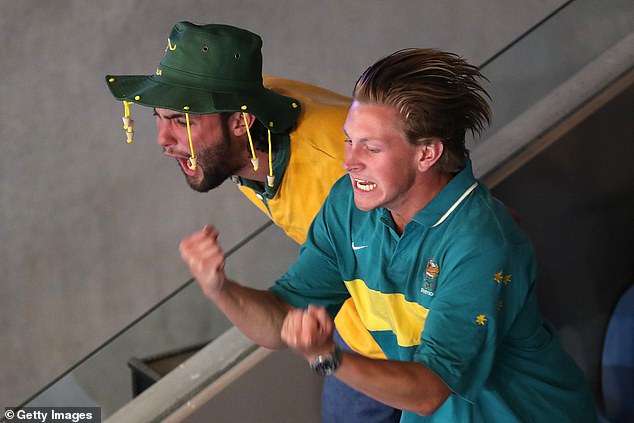 A furious Novak Djokovic pleads with the umpire to remove a loud spectator from the audience 😤#AusOpen | @DjokerNole pic.twitter.com/IiASc4pyEj

Djokovic urged chair umpire Fergus Murphy to have a spectator removed from Rod Laver Arena, telling the official: ‘The guy’s drunk out of his mind. He’s been provoking. He just wants to get in my head.

‘What are you going to do about it? Why don’t you get security to get him out of the stadium?’

A security official was then seen speaking to a group of fans dressed as Where’s Wally in a bid to calm things down. The group of fans eventually left the arena.

Despite the drunkards’ best efforts, they were unable to prevent Djokovic from advancing to the third round, with the Serb defeating Enzo Couacaud 6-1, 6-7 (5), 6-2, 6-0.

Speaking about the rowdy crowd, Djokovic said after the match: ‘What I have a problem with is when somebody’s crossing the line, numerous times … and saying things that were not respectful at all.’

Djokovic, who said the heckling had been going on for more than an hour and a half, added: ‘I had enough, you know?’

Meanwhile, Murray faced a torrent of abuse from Australian fans during his match against Kokkinakis. Fans took to Twitter to say that the crowd was ‘out of control’. 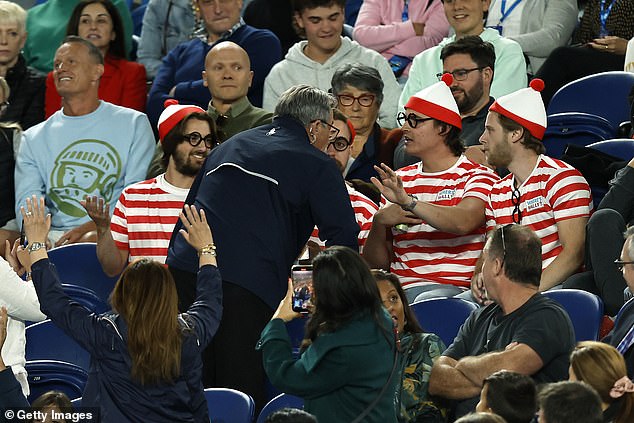 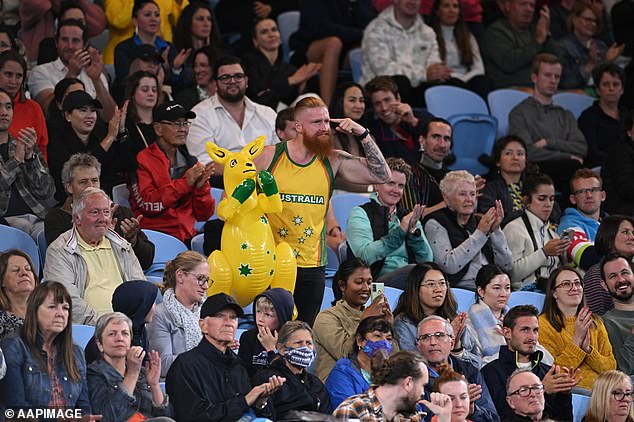 ‘The crowd in the Kokkinakis/Murray match, needs to shut the f*** up! Some crowd emotion is good, but they’re out of control at the moment and are impacting the game,’ one fan tweeted.

Another tweeted: ‘The crowd at this Kokkinakis/Murray match are f***ing unbearable.’

It comes after a group of British fans were kicked out of a stadium for chanting ‘You’re just a s*** Andy Murray‘ at Cameron Norrie during his victorious match against a French player at the Australian Open yesterday.

The British number one faced a mixture of support and abuse from rowdy fans during his match against the unseeded Frenchman Constant Lestienne, which he won three sets to one on Wednesday.

After Norries took a 4-3 lead over Lestienne in the first set, three British fans could be heard loudly cheering on the British tennis player during his second-round match. 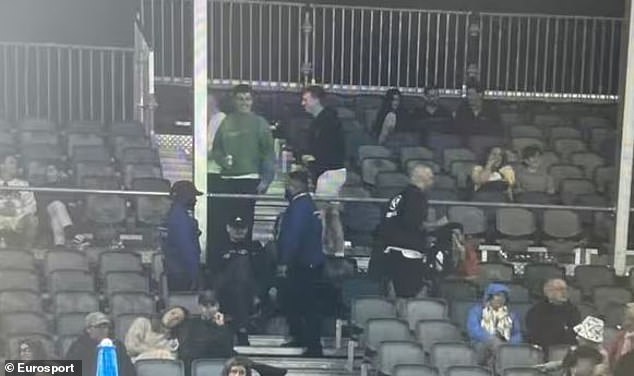 But the trio, beer cans in hand, began abusing Norrie when he lost points and shouted that he was ‘just a s*** Andy Murray’ and were kicked out of the stadium by security guards 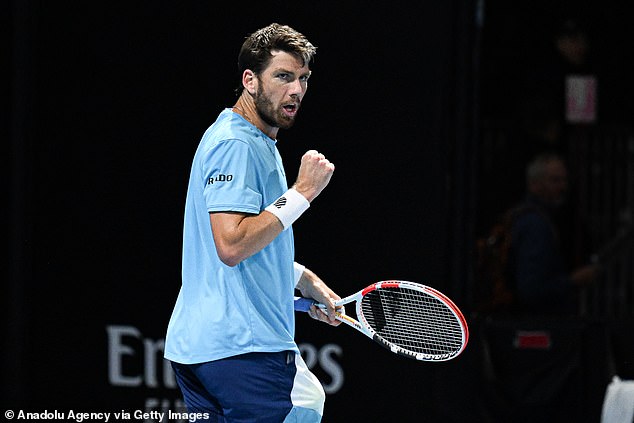 The British number one (pictured during his match on January 18) faced a mixture of support and abuse from rowdy fans during his match against the unseeded Frenchman Constant Lestienne, which he won three sets to one

But the trio, beer cans in hand, began abusing Norrie when he lost points and shouted that he was ‘just a s*** Andy Murray’ and were kicked out of the stadium by security guards.

The rowdy fans also got to Lestienne after they kept chanting ‘England’ and ‘Constant’s going home’.

Norrie took it in good spirits, saying: ‘In the first set there was a lot of English fans. And they had the football chants going, which was good fun, and then obviously they got kicked out.

‘I could still hear them in the second set. But it was a great atmosphere. It’s great obviously on one of the outside courts for them to stay around and support, especially playing so late and cold and everything, so it definitely spurred me on and got me through it, especially in that third set.’

Lestienne didn’t take it so well. He was given a time violation penalty by the match umpire and refused to play at one point, leading some of the fans to heckle the French player. 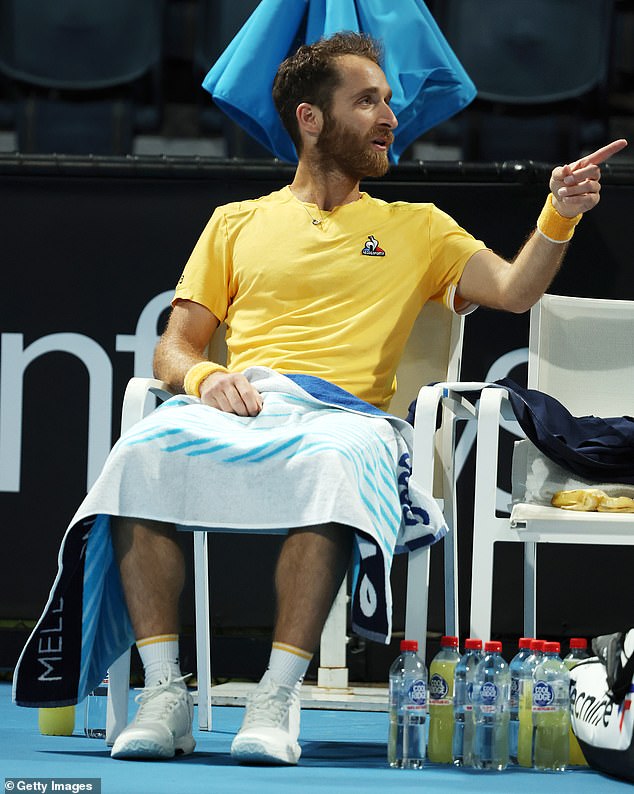 ‘This is all a bit awkward with spectators heckling Lestienne after he refused to play, BBC commentator David Law said during the match.

‘Lestienne’s irritation is there for all to see, he is jabbering away at the umpire, and I don’t think he wants to be out there.

‘Somebody in the crowd has just shouted “Come on mate, we’ve waited all day for this”. The locals are not happy. Lestienne is fuming and his bad mood is about to get worse.’