The value of Australian residential property has surged past $10 trillion for the first time thanks to 18 months of record-low interest rates.

The combined worth of all houses and apartments climbed by 21.4 per cent in the year to March when the Reserve Bank cash rate was still 0.1 per cent.

A $1.8 trillion annual increase, from $8.4 trillion a year earlier, took the total value of residential assets to an all-time high of $10.2 trillion, the Australian Bureau of Statistics revealed on Tuesday.

Australia’s housing stock is worth triple the $3.4 trillion locked up in superannuation savings and doubled in value over the past decade.

Regional Tasmanian had the biggest increase of 30 per cent, taking the median house price to $520,000.

Brisbane had the biggest capital city increase of 29.3 per cent, taking the mid-point house value to $787,500.

Canberra also had a big increase, with the middle price for a home with a backyard rising 28.3 per cent to $1.065 million.

This was significantly higher than Sydney’s annual increase of 16.4 per cent taking the mid-point house price to $1.245 million.

Melbourne, which like Sydney was in lockdown for much of last year, had a more subdued 9.4 per cent increase to $930,000. 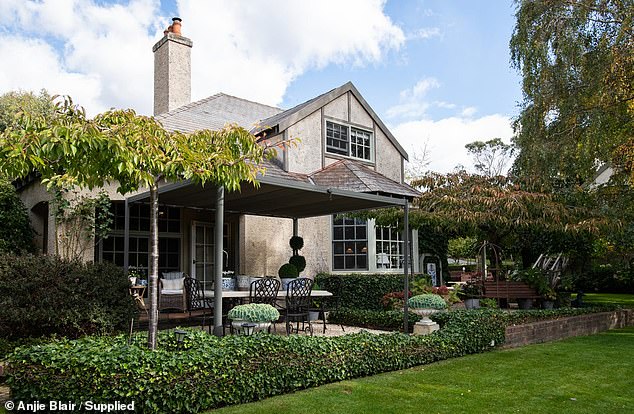 Regional Tasmanian had the biggest increase of 30 per cent, taking the median house price to $520,000 (pictured is a more upmarket house at Riverside near Launceston) 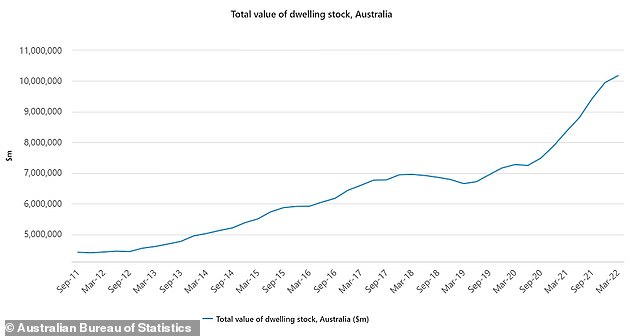 Australia’s housing stock is worth triple the $3.4 trillion locked up in superannuation savings and doubled in value over the past decade

This occurred as Western Australia was stubbornly cut off from the rest of the country to stop Covid from getting in.

The increases occurred in the year to March before the Reserve Bank raised the cash rate in May by 0.5 percentage points, the first increase since November 2010 which also ended 18 months of a record-low 0.1 per cent cash rate.

This was followed up by another half a percentage point move in June, with the RBA cash rate now at 0.85 per cent – the highest since October 2019.

New Australian Prudential Regulation data, also released on Tuesday, showed 23.1 per cent of new home loans had a debt-to-income ratio of six or more in the March quarter.

That was smaller than the December quarter’s record-high 24.3 per cent but still higher than the March quarter of 2021 figure of 18.9 per cent. 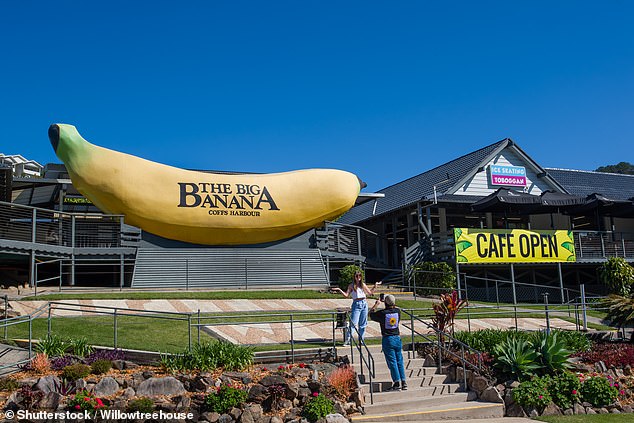 In regional New South Wales, median house prices surged by 29.1 per cent to $800,300 (pictured is The Big Banana at Coffs Harbour on the Mid-North Coast)

APRA, the banking regulator, considers a debt-to-income ratio of six or more to be risky.

Since November, lenders have been required to assess a borrower’s ability to cope with a three percentage point increase in mortgage rates, up from 2.5 percentage points previously.

While the value of Australian residential property has climbed above $10 trillion, RateCity research director Sally Tindall said stricter lending rules were already slowing down the market.

‘This new data shows APRA’s stricter serviceability test is beginning to have an impact on the ground,’ she said.

‘While no one likes to be told ‘no’ from their bank, stopping people from taking on risky levels of debt is a good thing.’

Where house prices REALLY increased before the rate hikes