Do you always stifle a sneeze in public? Student doctor reveals what social anxiety really looks like – and how to spot it in a friend or family member

The telltale signs of social anxiety have been revealed by a trainee doctor – and one is as subtle as stifling a sneeze.

Zachery Dereniowski is a Canadian medical student at the University of Sydney, where he specialises in mental health and spends his spare time filming educational TikTok videos on the subject.

In one of his latest clips, the 27-year-old discusses the symptoms of social anxiety, a disorder that causes everyday social interactions to trigger irrational self-consciousness and embarrassment.

While it’s normal to feel nervous in situations like a first date or a workplace presentation, those with ‘social phobia’ are crippled by the fear of being scrutinised or judged negatively by others.

When it comes to identifying a person who is suffering from social anxiety, Mr Dereniowski said the most obvious signs are attempts to escape attention.

These include stifling coughs and sneezes in classrooms and quiet public places and avoiding eye contact so you don’t have to start a conversation.

‘It’s holding in coughs so you don’t draw attention to yourself,’ Mr Dereniowski said.

He added: ‘It’s seeing someone you know in public and desperately trying not to make eye contact.

‘It’s realising you’re walking in the wrong direction but refusing to turn around in case you look foolish.’

– Fear of situations in which you may be judged negatively

– Worry about embarrassing or humiliating yourself

– Intense fear of interacting or talking with strangers

– Fear that others will notice that you look anxious

– Fear of physical symptoms that may cause you embarrassment, such as blushing, sweating, trembling or having a shaky voice

– Avoidance of situations where you might be the centre of attention

– Anxiety in anticipation of a feared activity or event

The clip, which has amassed more than 97,700 views since it was uploaded on Wednesday, drew heartbreaking responses from people living with social anxiety.

‘Whenever I’m about to sneeze I make sure I don’t make a sound just so I don’t bother anyone,’ one person wrote.

A second agreed: ‘I even hold coughs in around people I’m dating.’

‘I relate to every one of these, it’s my life,’ added a third. 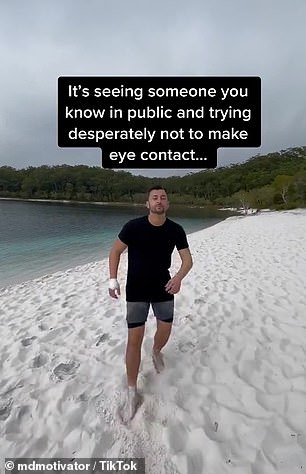 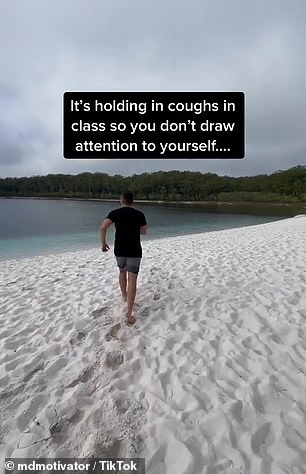 When it comes to identifying a person who is suffering from social anxiety, Mr Dereniowski (left and right) said the most obvious signs are attempts to escape attention

Others said watching the footage made them realise they may have had social anxiety their entire lives.

‘I have all three, aren’t these normal?’ one person wrote.

‘I thought it was just me,’ said another.

Mr Dereniowski left a message of support in the comments section of his video, reminding viewers that their ‘lives matter’ regardless of the mental health battles they may be facing.

‘You are so valued. No one can replace you,’ he wrote.

If you or anyone you know is experiencing mental health issues, please contact Lifeline on 13 11 14.