Nail technician, 24, who can hear the sound of her own heartbeat and the movement of her eyes discovers she has a rare disease – after doctors told her there was nothing wrong with her

A woman who was told by doctors there was nothing wrong with her has been diagnosed with a rare condition that means she hears her organs moving inside her body.

Perth nail technician Tenika Nicotra, 24, can hear the sound of her heartbeat and the movement of her eyes – an unpleasant symptom of Superior Canal Dehiscence Syndrome (SCDS).

She first noticed the unusual sensation when her left ear suddenly became blocked while working on a friend’s nails in October, 2017.

Tenika Nicotra (pictured), 24, has Superior Canal Dehiscence Syndrome (SCDS) which enables her to hear her heartbeat and eyes moving

‘I thought it would unblock, but when I got home that night I realised that I was hearing was my heartbeat,’ she told Daily Mail Australia.

‘It was a constant sensation and it was quite loud which made it difficult to sleep.’

‘It was really depressing.’

The intense sound of her heartbeat faded after a few days- but there was another noise she could not pinpoint.

‘I realised it would grow louder when I moved my eyes around left to right and up and down,’ she said.

‘That is when I put two and two together that I could hear my eye balls.

‘It sounds exactly like the sound you would get if you rolled marbles on a wooden floor.’

Hoping for help, the beauty specialist booked in to see a doctor but was told nothing was wrong.

Several more doctors over the next few months would tell her the same.

‘I did consider I was insane and was imaging things that were not there and that  I might have to go see psychologists. I downloaded apps to try and block it out.’ 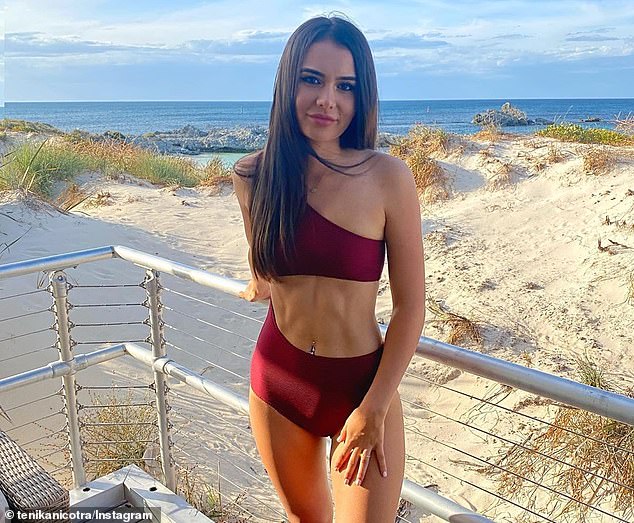 Ms Nicotra finally saw a specialist in May 2018 who diagnosed her straight away.

In her case, the doctor discovered it was caused by a thinning of the bone in her ear canal.

Those with Superior Canal Dehiscence Syndrome, who make up 1-2 per cent of the population, can elect to have an invasive brain surgery to stop the symptoms but there is no guarantee it will work.

Ms Nicotra has chosen to manage the symptoms on her own, and said she feels grateful they are not worse after connecting with others who also have the condition.

She hopes sharing her story will encourage people to push for answers when they feel something is not right with their health.

‘It was really frustrating and lonely at the time, but now I know how were they were supposed to diagnose me if they didn’t know,’ she said.

‘You don’t have to feel alone.

‘Push to find a good specialist and get answers.’