NASA’s Perseverance rover has successfully landed on Mars – with the search for signs of life on our nearest planetary neighbour being led by an Australian.

Dr Abigail Allwood is not only the first Australian to be a principal investigator on a mission to Mars – but is also the first woman to hold the role.

As the $2.2billion SUV-sized rover touched down planet’s surface on Friday morning, social media lit up congratulating the space agency on the remarkable achievement. 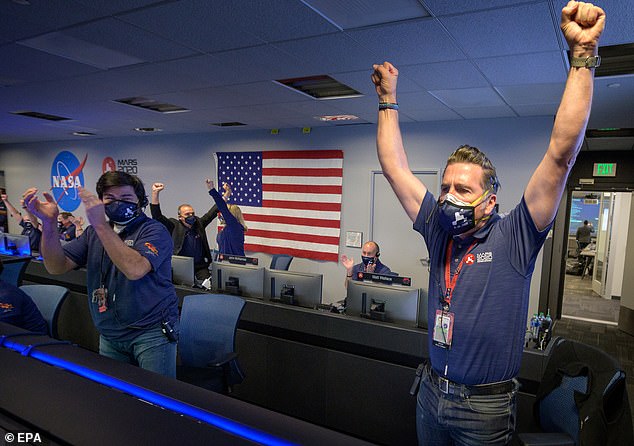 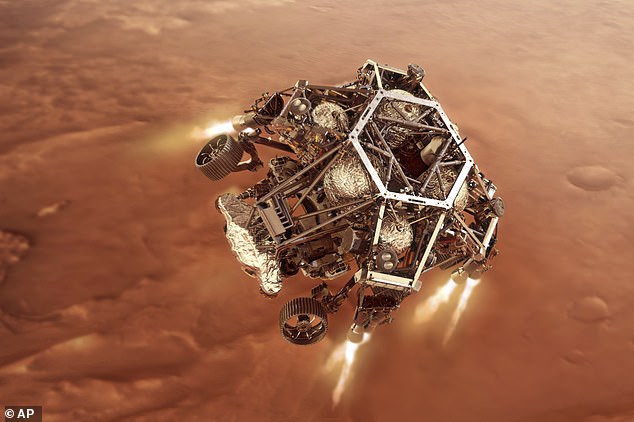 A landing harness carrying Perseverance which is fitted with eight rocket thrusters took control of the descent after the parachute is jettisoned process and slowed the craft down from 190 miles per hour to a mere 1.7 miles per hour while also steering the lander

Famous figures such as Buzz Aldrin, Neil deGrasse Tyson, and Brian Cox joined the mission control team in celebration as the first pictures were beamed back to Earth.

Behind-the-scenes, Dr Allwood has been keeping a low profile since Perseverance launched back in July 2020 – tasked with discovering if life ever existed on Mars.

‘I was a bit disappointed with the launch. To me it was just like another Zoom meeting,’ she told the ABC from her home in California the day before the landing.

‘I’ve been trying not to get my expectations of what it will be like to see it land up too much because I don’t want it to be like that again.’ 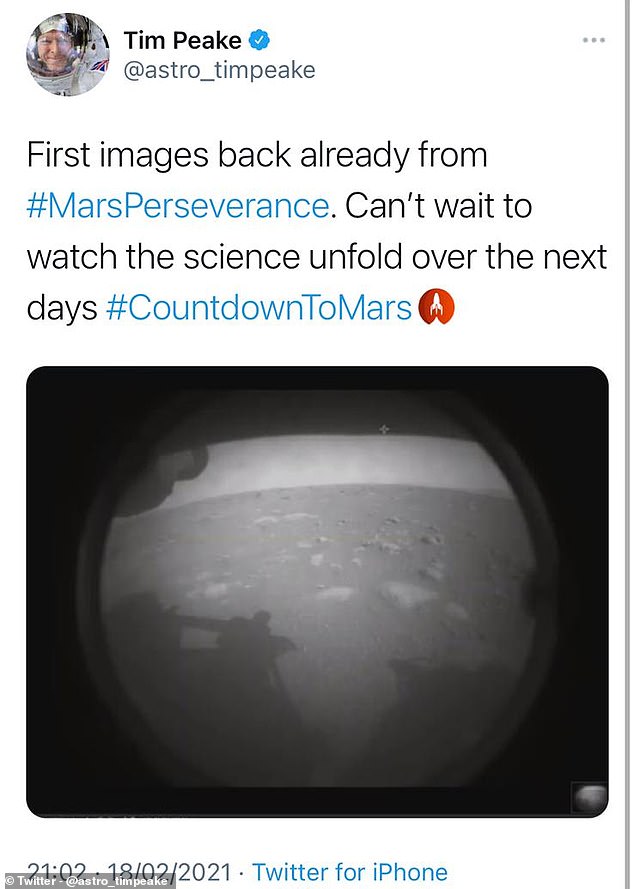 Brian Cox, Bill Nye and Tim Peake were among the first to celebrate the achievement of NASA landing Perseverance on the Martian surface 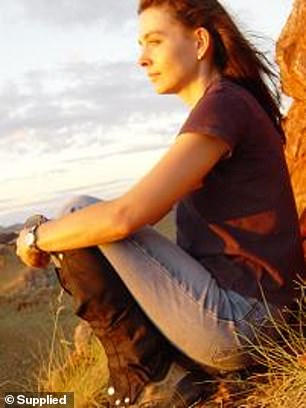 Though as the landing neared she revealed she had a lot more trouble containing her excitement.

‘Wow. My invention is going to land on Mars … It’s unfathomable. I can’t quite believe it,’ she said.

Dr Allwood grew up in Brisbane, inspired by science fiction writer Carl Sagan and his descriptions of the Voyager missions in the Cosmos series.

She gained a degree in geosciences before her PhD work finding evidence of life in 3.45billion year old rock formations in the Pilbara region of Australia gained her international attention.

NASA immediately took notice and she relocated to the United States to join the agency’s elite Jet Propulsion Laboratory. 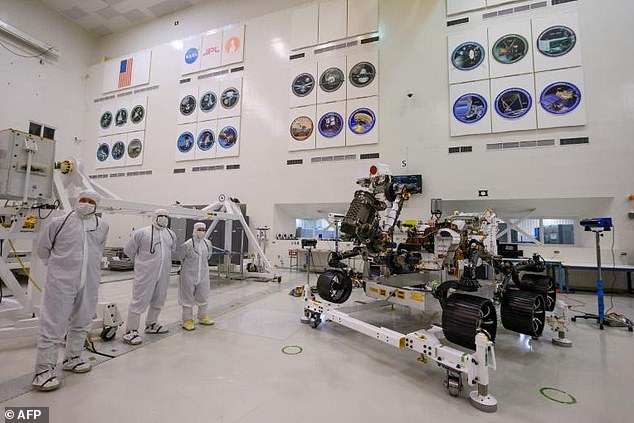 Dr Allwood’s invention, a lunchbox size tool perched on the arm of the robotic rover, is called PIXL – short for Planetary Instrument for X-Ray Lithochemistry.

The high tech camera was perfected with the help of NASA since 2014 with a budget of $1.3billion.

The instrument takes close up images of the planet’s rocky surface and scans postage stamp sized samples for chemical signatures of microbial life. 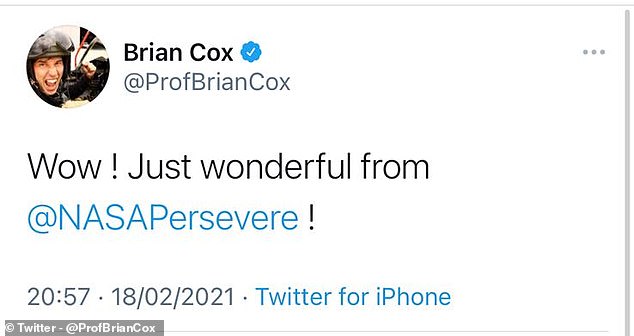 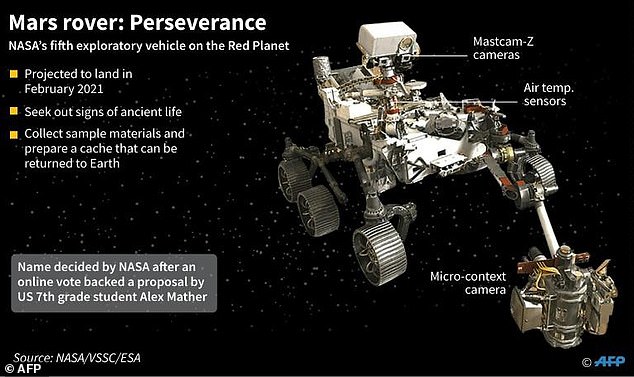 With her at JPL for the first year of the project was another Australian – Queensland University of Technology graduate Dr David Flannery.

Now back with QUT, Dr Flannery’s team will pick up crunching the data sent back from Perseverance from their Australian base when California goes to sleep.

The information will be beamed back around the clock until at least April 2023.

The rover will also start collecting and storing rock and soil samples, to be retrieved by a future mission and brought back to Earth in 2031.

Perseverance follows in the tire tracks of four rovers before it, all American, which first launched in the late 1990s.

Together with satellite and surface probes, they have transformed our understanding of Mars, showing that the Red Planet wasn’t always a cold and barren place.

Instead, it had the ingredients for life as we know it: water, organic compounds and a favorable climate.

Scientists will examine the samples obtained by Perseverance to look for fossilized bacteria and other microbes to try to confirm if aliens did once live on our neighboring planet. 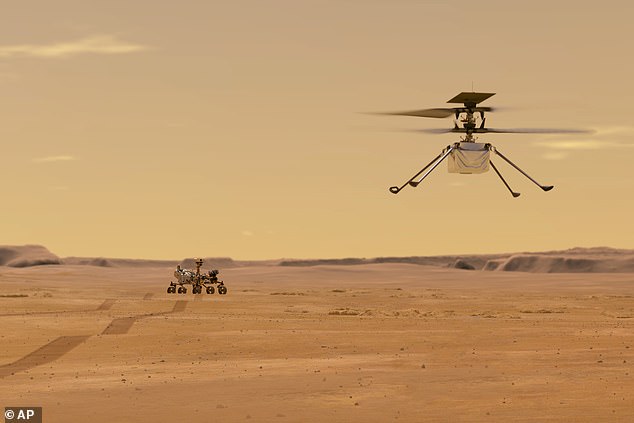 The first act of Perseverance — which has been based on the blueprint of Curiosity and is the seven feet tall, nine feet wide and weighs 2,260 pounds — was e to release its accompanying Ingenuity helicopter (pictured). The copter will fly at an altitude that is similar to 100,000 feet on Earth, allowing it to gather geology data in areas the rover is unable to reach 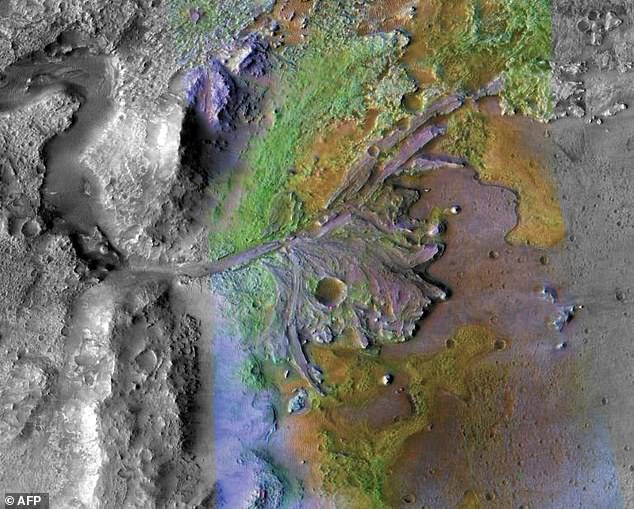 On February 18 2021, Perserverance landed in the Jezero Crater, home to an ancient river that fanned out into a lake between three and four billion years ago, depositing mud, sand and sediment

Perseverance is designed to land inside the crater and collect samples that will eventually be returned to Earth for further analysis.