An Australian woman has sparked controversy online after posting a list of strict rules her husband must follow.

Taking to a Facebook group, the poster asked for feedback on her ten regulations which included forbidding her spouse from having female friends and requiring him to work a minimum of 50 hours every week.

The rules triggered widespread debate on social media, quickly racking up more than 500 likes and thousands of comments with many users aghast at the restrictions placed on her partner.

In the interest of ‘fairness’, the woman explained she was ‘rewriting a list of rules’ after being told her ‘first lot [were] a bit harsh’.

‘What do you think of these, honest opinions please as I really want to be fair. Is there any more I should add?’

The woman laid down ten rules, starting with a ban on social media and female friends of any kind.

Her husband can only associate with single men, shunning friendly relationships with any males who have partners.

He must work a minimum of 50 hours per week, never smoke and only drink twice a year (or less) with the proviso that he doesn’t get drunk.

Video games and pornography are also banned, as is socialising without his wife.

He must also keep the house clean ‘at all times’. 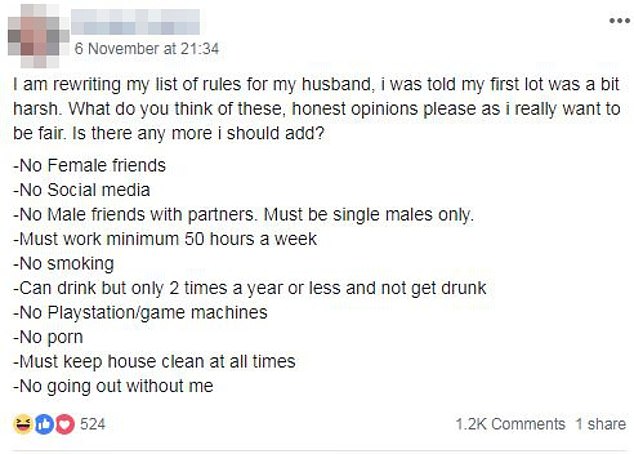 He must work a minimum of 50 hours per week, never smoke and only drink twice a year (or less) with the proviso that he doesn’t get drunk

The bizarre collection of rules prompted a flood of responses on social media, with one user writing: ‘Well you have to follow the same rules – no male friends and no social media.

‘Good luck to him wanting to do anything when he gets home [from work] if you expect him to do 50 hour weeks.’

Others berated the woman for trying to control her husband’s every move, saying: ‘You can’t own someone! This is a hostage negotiation, not a marriage.

‘If that’s your list I’m sorry to say [you] will probably be single for a long time.’

One user questioned the poster’s trust in her husband if she felt the need to lay down such a list of rules.

‘You can’t do this to another human and expect to be happy – people who are happily married don’t need [a] rules list, their boundaries are already respected.

‘You guys are adults, this is supposed to be your trusted companion.’

Another echoed this opinion and suggested the couple ‘go to counselling’ to address the woman’s insecurities.

It is not known if the post was genuine or if the woman was trolling the group for entertainment.