Scott Morrison has effectively banned gathering of more than two people across Australia to slow the spread of coronavirus.

The Prime Minister addressed the nation from the Blue Room of Parliament House on Sunday night after meeting with the National Cabinet.

He said the meeting of state and federal leaders advised that no more than two people who didn’t live together should be meeting at once.

Playgrounds and outdoor gyms should also be closed.

Mr Morrison also strongly advised that anyone over 70 stay home for their own safety, except for going for a daily walk in the fresh air.

Prime Minister Scott Morrison said a week ago the rate of virus infections was to 25 to 30 per cent a day, but slowed to about 13-15 per cent in the past few days 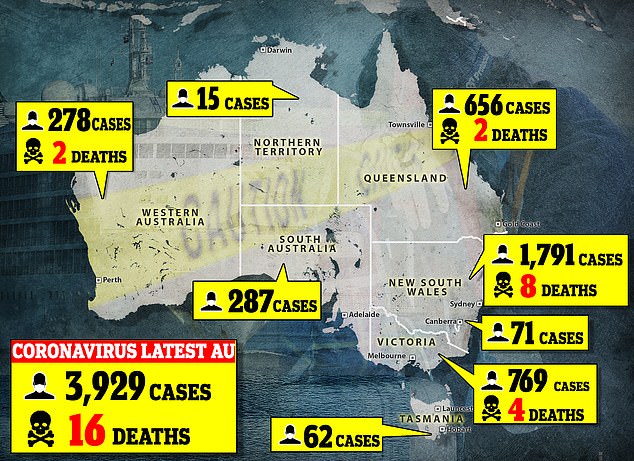 Australia has 3,929 cases, rising by the hour, with 16 deaths and 242 patients who have recovered

None of the measures were outright bans, just strong advice from the government’s medical advisers, but state governments could choose to enforce them with fines.

‘States and Territories will term whether they proceed to make this an enforceable limit in the same way that the 10-person limit is already been enforced,’ he said.

Mr Morrison made it clear this advice was for all circumstances, not just for social gatherings in homes.

‘That provides, importantly, for those who may be getting daily exercise, particularly for women, that they wouldn’t be required to walk on their own and they be able to be walk with another person,’ he said.

‘In addition, in public area, public playgrounds, outside gyms and skate parks will be closed as from tomorrow and boot camps will be reduced to two,

‘Which doesn’t really make it a boot camp, that makes it a private session with your trainer for those who are accessing those services.’

Mr Morrison earlier on Sunday said half as many Australians were catching coronavirus as a week ago with the borders, pubs, and restaurants shut.

‘They are still strong rates of increase, there’s no doubt about that,’ he said on Sunday.

‘But as we take the measures that we have been taking and put them in place and we have the co-operation from the Australian people, then that obviously in turn that has an impact on how we are managing the spread of the virus.’

Australia has 3,980 cases, rising by the hour, but only a handful in intensive care units or on ventilators and 242 patients have recovered.

Victoria recorded a big jump in cases overnight taking the state total to 769. NSW rose to 1,791 – well over double any other state.

Australia recorded its biggest daily rise on Saturday of 460 cases, and 370 and 378 the two days before.

However, during that time the total climbed by more than 1,000, so each day was a smaller percentage rise than the last.

Community transmission cases in NSW ballooned last last week and Victoria started to see an early surge in cases with an unknown source.

The 75-year-old passenger died in Caboolture Hospital in Queensland, 10 days after she stepped off the boat in Sydney Harbour. 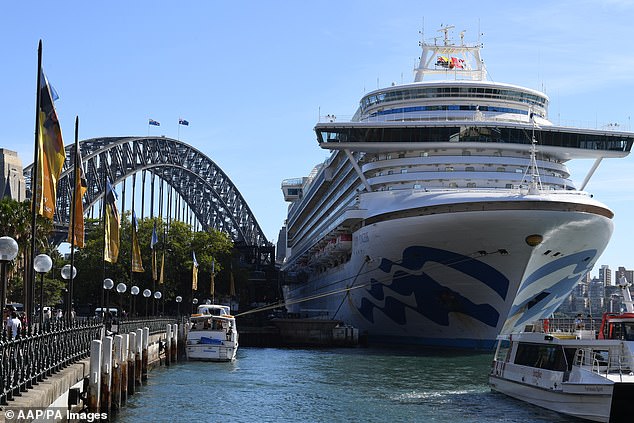 More than 100 infected travellers were allowed to disembark the ship without any checks and travelled to their home states – exposing thousands along the way.

The other victim was a man in his 80s who died in a Melbourne hospital.

More than 3,000 people are still arriving in Australia every day as citizens can continue to return while the borders are closed to foreigners.

They were shuttled to makeshift quarantine facilities as the government turns to law-and-order to fight coronavirus.

With two-thirds of the country’s cases from or closely linked to overseas travellers, vacant luxury hotels and other accommodation services are being used to ensure no more travellers have a chance to spread the disease. 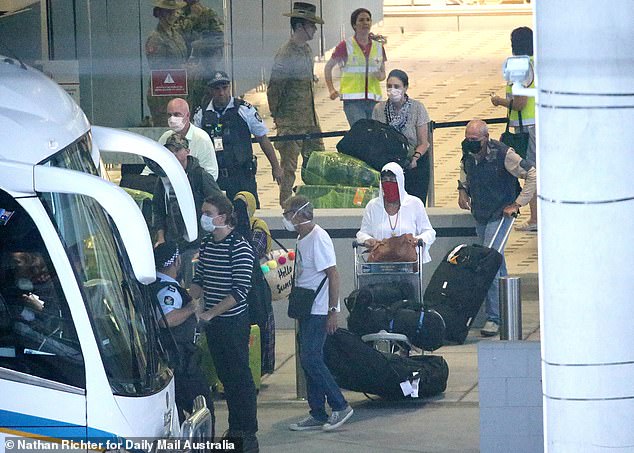 In Brisbane, passengers who arrived from Bali were ushered into waiting buses to be taken to their quarantine hotels 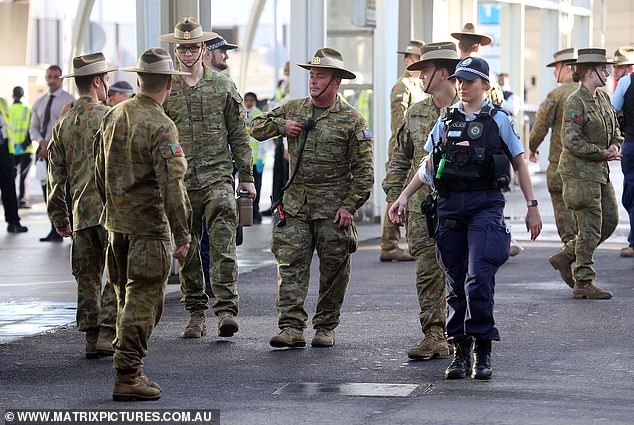 The army was called in to help ensure the transition ran smoothly on the first day of the new policies, with returning travellers escorted onto buses for a 14-day quarantine

NSW Police urged friends and families to stay away from Sydney Airport, saying those being quarantined would not be able to see or communicate with their loved ones.

The first group to be ushered out of the airport and onto a bus had just landed from Tokyo.

When asked whether they were shocked by the new rules put in place by Prime Minister Scott Morrison, one woman replied ‘no’.

However, she said she was shocked to see so many army officers patrolling the area.

Returned travellers will live out their 14 days of quarantine in state-funded hotel rooms, with doors guarded by state police, defence personnel or private security guards.