Australians working from home are more satisfied with their jobs as a result, but are also missing their office environment and the day-to-day routine they followed before COVID-19 hit.

A report by software company Atlassian, surveyed 5,000 people across Australia, France, Germany, Japan and the US, and found they felt better off working from home.

In Australia, 68 per cent of respondents declared they were ‘thriving’ with their work while based at home and felt prouder about their achievements.

In Australia, 68 per cent of respondents declared they were ‘thriving’ with their work while from home and felt prouder about their achievements (stock)

Eighty per cent of respondents also said they feel they have connected better with their colleagues with 73 per cent happy with their bosses as a result.

Atlassian work futurist Dom Price said the lockdown has allayed long-held concerns among bosses that workers would slacken off if left to their own devices, and workers have thrived.

‘This element of trust is weird because you can’t see it, you can’t smell it, it’s very hard to measure. But when you have trust on both sides – the employee and the employer – wonderful things happen,’ he told Business Insider Australia.

The survey however did show that at least three in four Australians expressed ‘annoyance’ that it took the onset of a pandemic for companies to allow such workplace flexibility.

Despite this, Mr Price said that ‘not everyone is having the same experience’ due to COVID-19 rules. 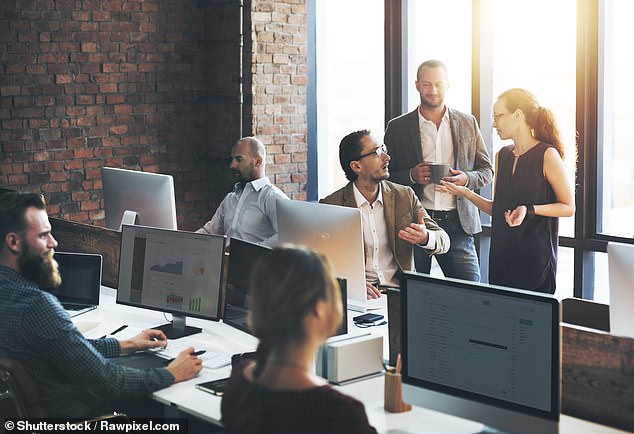 A total of 69 per cent of Australian respondents said they felt different without their usual routine of getting up, getting ready for work and commuting.

Seventy-seven per cent said they missed the workplace energy that came with just being in the office.

One result which had Mr Price particularly worried is that the ease of logging on from home means the work day has now effectively been extended.

‘We’ve inadvertently extended the working day and we’re doing it by sacrificing things that are as important, if not more important, being balance,’ he explained.

‘We’ve been adding in technology and saying we’re going to reduce the working week for about 20 years and it’s been slowly increasing, not decreasing, and this has just tipped us more in the wrong direction.’

He said people would decided to do more work in place of their activities but stressed there needed to be more balance and mindfulness around personal time.