Australians overwhelmingly back vaccine passports to get out of lockdown

Australians overwhelmingly support the idea of vaccine passports to be served at restaurants and pubs, a new poll shows.

Prime Minister Scott Morrison and state premiers are advocating the idea of allowing businesses to refuse entry anyone who can’t prove they are fully vaccinated against Covid.

Just 34.16 per cent of those aged 16 and over have so far received two doses of either AstraZeneca or Pfizer.

That means Australia is almost halfway to the National Cabinet goal of ending hard lockdowns once 70 per cent of people were double vaccinated.

Australians overwhelmingly support the idea of vaccine passports to be served at restaurants and pubs, a new poll shows (pictured are friends eating al fresco at Newtown in Sydney’s inner west before the pandemic)

With Sydney now in its ninth week of lockdown, New South Wales Premier Gladys Berejiklian has promised more freedoms from October when Australia’s most populated state reached that immunisation milestone.

She is backing the idea of vaccine passports to minimise the spread of the more contagious Indian Delta variant as the economy gradually opened up again.

The public overwhelmingly agrees, with 82.2 per cent of Australians backing the idea of a vaccination passport showing they have received two jabs, a CoreData survey showed.

‘It’s clear from this response the population feels there is now enough data about the mental effects, the health effects and the economic effects of protracted lockdowns for more nuanced decisions to be made by governments,’ he said.

Just 17.8 per cent disagree with that concept, with about 11.8 per cent overall strongly disagreeing. 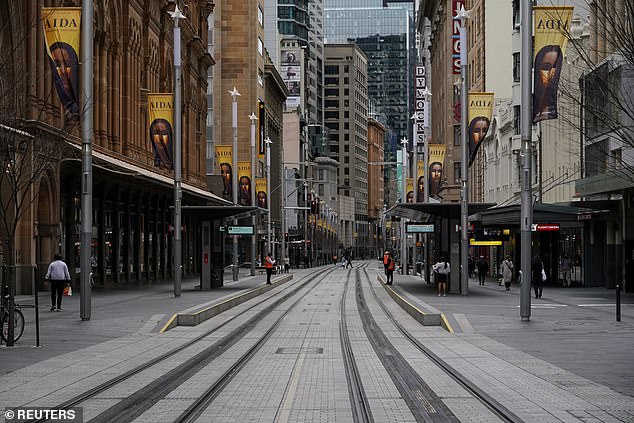 CoreData chief executive Andrew Inwood said Australians regarded vaccine passports as a civil liberties compromise to end lockdowns but contain the spread of Covid, 82.2 per cent of respondents in favour (pictured is Sydney’s George Street during the lockdown in August)

The hospitality sector, however, supports vaccine passports with the Australian Hotels Association and the Committee for Sydney, a business lobby group, giving their backing.

Airlines Qantas and Virgin are also backing vaccine passports for their passengers.

France last month introduced laws that will from early August require vaccine certificates or a negative Covid test result for anyone entering a public, indoor setting.

Similar rules also came into effect in Greece in July, stopping anyone being served at indoor restaurants, bars and cafes unless they could prove they had been immunised.

A swathe of European nations including Ireland, Germany, Belgium, Portugal, Denmark, Austria, Italy and Spain require proof of vaccination for customers to be served.

Australians also back vaccine passports to be produce for travel purposes with 84.3 per cent saying it should be required to travel overseas.

There was less support for making it compulsory to cross state borders or move within a state more freely with 69.6 per cent backing it for domestic travel.

A similar proportion, 70 per cent, backed vaccine passports for public events like sport or the theatre.

But less than half – 48.4 per cent – backed this requirement for public transport.

CoreData surveyed 1,774 people in Australia aged 18 and over on August 24.