Australia’s bushfire crisis has reached new terrifying levels with multiple state’s bracing for some of the most dangerous conditions this year.

A Code Red fire danger has been issued in Victoria for the first time in a decade – signalling the worst possible bushfire conditions.

Residents in the state’s north are being told their houses are not built to withstand the conditions and they should get to major cities if they can.

Officials are warning the conditions in Victoria are as bad as Black Saturday when 173 people were burned to death in 2009.

Conditions in New South Wales are also expected to get worse, with lightening strikes and hot easterly winds tipped to ignite more fires.

Most of the east coast is under severe or very high fire danger ratings, with more than 50 fires burning across NSW of which 20 remain uncontained.

RFS volunteers and NSW Fire and Rescue officers protect a home on Wheelbarrow Ridge Road being impacted by the Gospers Mountain fire near Colo Heights south west of Sydney, Tuesday 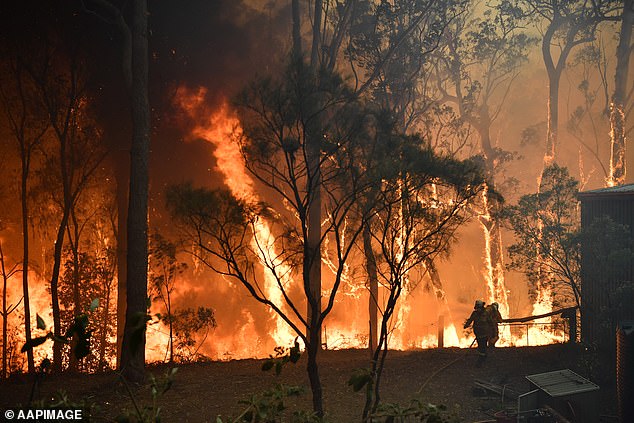 RFS volunteers and NSW Fire and Rescue officers protect a home on Wheelbarrow Ridge Road being impacted by the Gospers Mountain fire near Colo Heights south west of Sydney, Tuesday 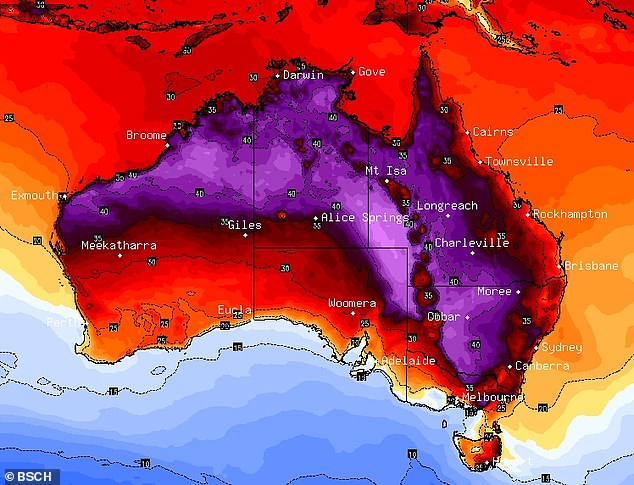 Sydneysiders woke up once again to thick smoke blanketing the city after northerly winds blew smog from a huge fire at Gospers Mountain in the Hawkesbury region.

The Rural Fire Service is controlling the fire, which covers more than 160,000 hectares.

A severe fire danger rating is in place for 10 areas, including Illawarra-Shoalhaven. The entirety of the state’s south is under “very high” or “severe” fire danger as hot winds blow in from South Australia.

But, after a fortnight of serious fires, he’s hopeful conditions will improve in coming days.

‘Hopefully, once we turn the corner on today there’ll be an easing of conditions more broadly across the state,’ he said. 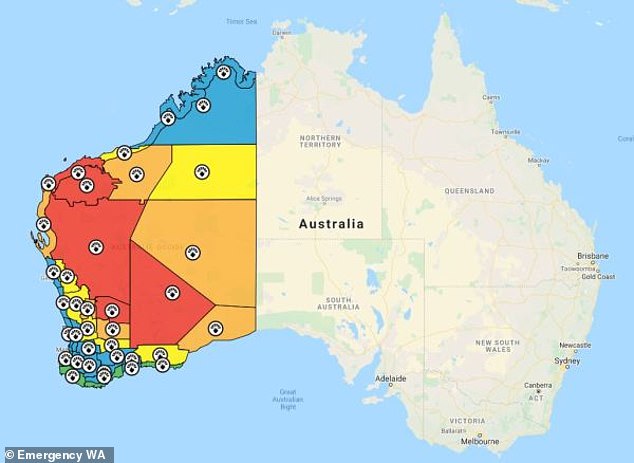 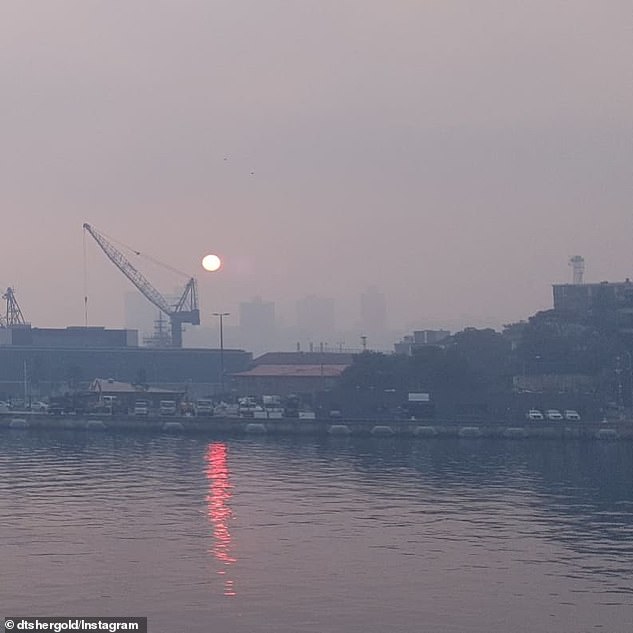 Winds of up to 60km/h are forecast across the southern border region which could present challenges if there are new fires, Mr Fitzsimmons said.

It’s hoped north-easterly winds along the coast will help stop fires spreading and support firefighters in their bid to protect properties through backburning, which will continue on Thursday.

Thick smoke was also causing problems for those in Adelaide as a westerly wind change had pushed smoke from the Yorketown bushfire on Yorke Peninsula into the city.

Residents in  Coobowie and Wool Bay, South Australia, have been told to leave as the blaze in Edithburgh moves north-easterly – threatening homes and lives. 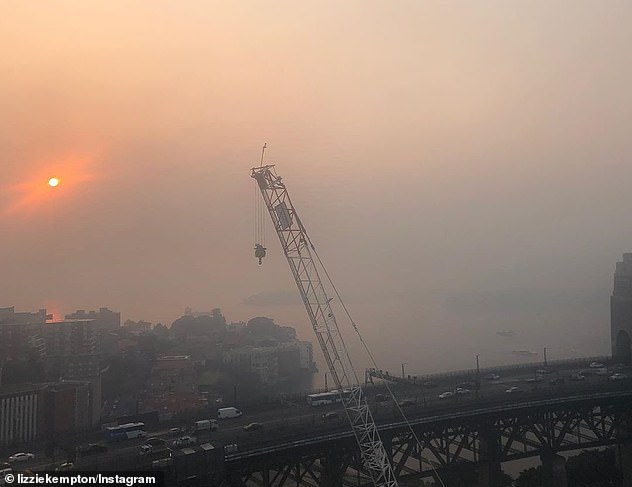 The Rural Fire Service is controlling a fire north of Sydney, which covers more than 160,000 hectares. Pictured: Smoke over Sydney

The worst conditions are expected in Victoria’s north where the mercury is expected to linger above 40C on Thursday.

While conditions will be milder in the rest of the state, fire danger ratings are listed as severe or very high, while temperatures are close to all-time November highs, with Melbourne forecast at 39C.

Victoria has a total fire ban in place across the state and has declared Code Red conditions.

Emergency Management Commissioner Andrew Crisp has urged for Victorians to be prepared for fire and know where to get information from.

‘Given fires could start and move quickly, you won’t always receive a warning or be told what to do if a fire starts.’ 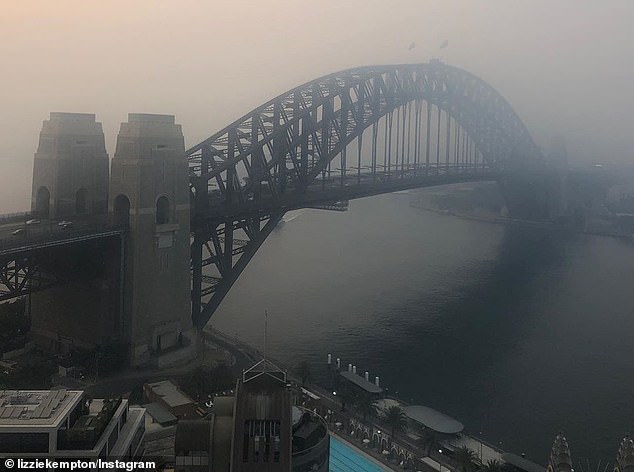 Sydney has woken up to a thick blanket of smoke covering the city for the second time this week. Pictured: The smoke on Tuesday

‘Homes are not built to withstand the types of fires we may see on a Code Red day and you don’t want to be caught travelling through areas on fire at the last minute if you wait and see,’ CFA Chief Officer Steve Warrington said.

Much of coastal South Australia has also been placed under catastrophic fire danger ratings – including the Eyre Peninsula, the west coast and the Mount Lofty Ranges east of the state capital.

The loss of property was yet to be confirmed but there were reports at least two houses had been destroyed in an area home to about 1000 people.

In the latest emergency warning, the Country Fire Service urged everyone in Yorketown to take shelter as it was no longer safe to leave. 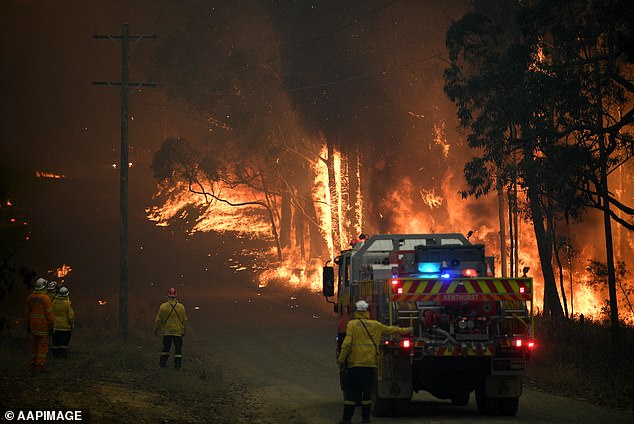 The hot temperatures will be accompanied by strong winds and possible dust haze, increasing the fire danger 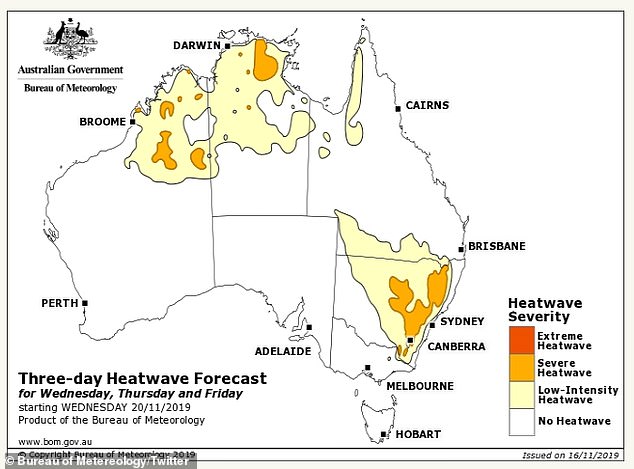 This fire was burning in a northwesterly direction towards Waterloo Bay and Wattle Point.

Tasmania is also bracing for the state’s dangerous conditions, with dry winds and hot temperatures forecast.

The fire danger over much of the state’s south and east on Thursday is considered severe, the third-highest of six ratings.

Temperatures are forecast to peak in the mid-30s in parts, with Hobart expected to reach 30C.

Tasmania Fire Service Deputy Chief Officer Bruce Byatt said crews are on stand-by in the worst conditions of the bushfire season to date.

A 24-hour total fire ban for the island’s south and north is in place from 2am.

Dry winds of 60-70km/h are forecast, but relief is expected on Thursday afternoon when a cold front crosses the state.

Wildfires in October threatened shack communities in the Central Highlands, prompting authorities to declare the start of the bushfire season. 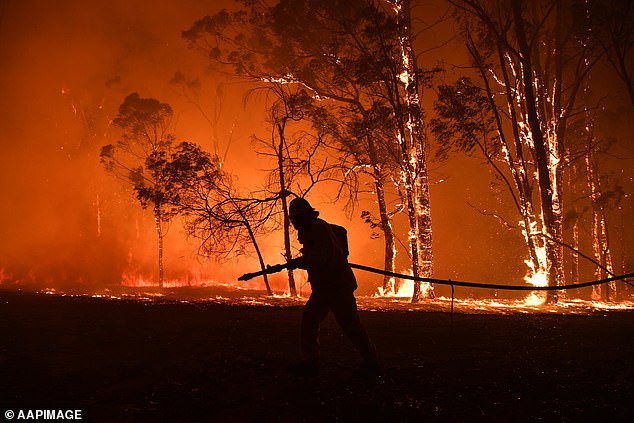 RFS volunteers and NSW Fire and Rescue officers protect the Colo Heights Public School from being impacted by the Gospers Mountain fire near Colo Heights south west of Sydney, Tuesday 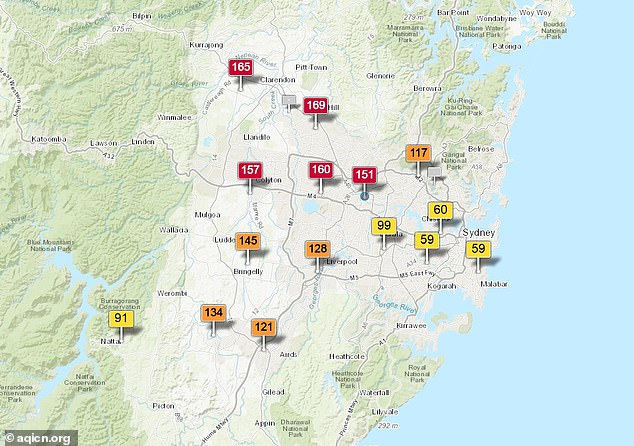 Firefighters are facing weeks of testing conditions, with no forecast of significant rain until January.

Six lives and 577 homes have been lost this fire season, the RFS has declared, with more than 420 homes lost in the past fortnight.

NSW Police told reporters on Wednesday that legal action had been taken against 54 people since August for bushfire-related offences.

Along with possible bushfires, the National Asthma Council Australia has forecast Thursday’s pollen count as ‘extreme’.

The alert coincides with the third anniversary of the epidemic thunderstorm asthma event, which claimed 10 lives on November 21, 2016.

‘Today’s anniversary is a reminder that the risk is real. Any serious asthma attack can be life-threatening and have devastating consequences,’ NAC chief executive Siobhan Brophy said.

‘People do not need to be in the immediate area of a fire to suffer from the effect of smoke on their lungs. Wherever smoke haze is visible, it is a threat to those with asthma.’