Long journeys to the UK for the Queen’s funeral on Monday began in earnest today – with Australia’s Prime Minister Anthony Albanese one of the first dignitaries to set off.

The PM is bringing with him ten ‘everyday’ people with him for the emotional service that takes place next week.

The Queen knew Mr Waller well and was said to be in contact with him before her death last Thursday.

Mr Albanese said earlier this week: ‘These everyday Australians will travel alongside myself and the Governor-General and will join the Acting High Commissioner Lynn Atwood who is currently located in the United Kingdom.

‘We have put together and confirmed all of these people will be able to travel, they will be on the same plane as me that will leave from Sydney on Thursday.

While most nations can send their leader or appointed delegate plus a guest, the Commonwealth realms, which retain the monarch as head of state, are being granted extra representation.

The realms can send prime ministers plus a guest, governors general plus a guest and the high commissioner.

They are also allowed to bring 10 ordinary citizens.

French President Emmanuel Macron has already confirmed he will attend the Queen’s funeral on Monday, and that he offered condolences to King Charles on the death of his mother in a phone call on Wednesday night.

Dignitaries begin to board one of two RAAF aircraft at Sydney Airport, Sydney, this morning ahead of the funeral next week 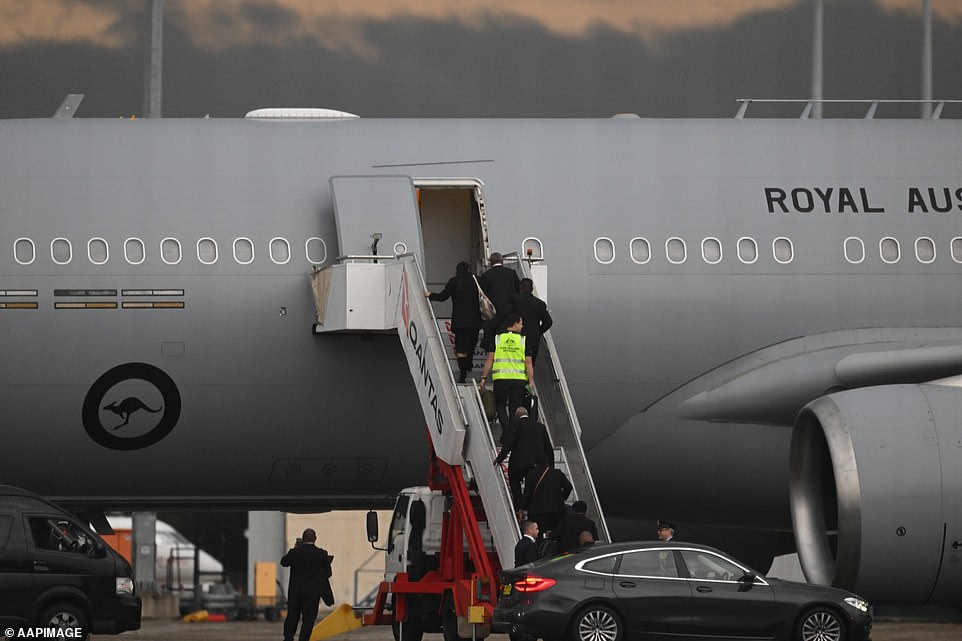 Prime Minister Anthony Albanese, Governor General David Hurley and a selection of invited guests including Gai Waterhouse and Dylan Alcot will fly on the Government jets to London for Queen Elizabeth II’s funeral 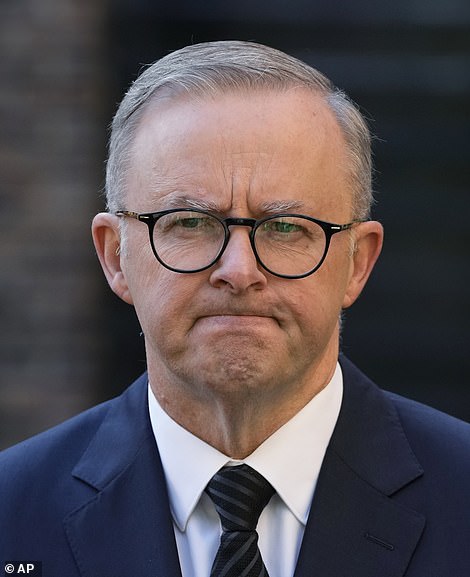 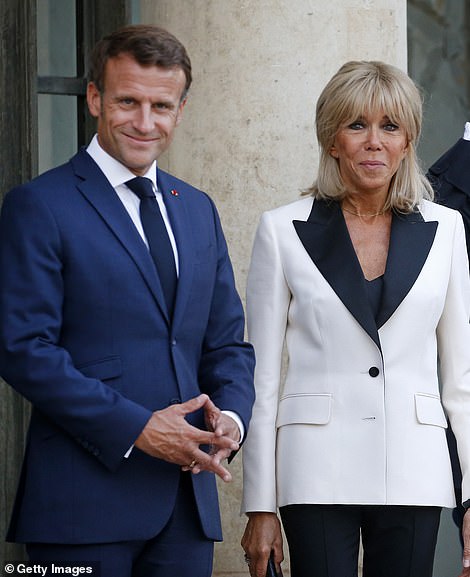 In a series of tweets, French President Emmanuel Macron said: ‘In a phone conversation with His Majesty King Charles III last night, I expressed France’s condolences on the death of his mother, Her Majesty Queen Elizabeth II. I will attend the funeral in London on Monday.

‘The ties between France and the United Kingdom are unbreakable. We will continue to strengthen them, following the path laid by Her Majesty Queen Elizabeth II.’

Invitations to the Queen’s state funeral have not been sent to Syria, Venezuela or Taliban-ruled Afghanistan.

While most countries around the world have been invited to send their head of state, Syria’s leader Bashar al-Assad, Venezuela’s Nicolás Maduro and representatives from the Taliban have all been left off the exclusive guest list.

Those three countries join Russia, Belarus and Myanmar on the list of nations not asked to send a representative, while North Korea and Nicaragua have been invited only at ambassadorial level, joining Iran in that category.

Invitations are being sent to most nations with which the UK has diplomatic ties. The UK does not have diplomatic relations with Syria or Venezuela, while the political situation in Afghanistan since the Taliban swept to power a year ago means no representative has been invited from Kabul. 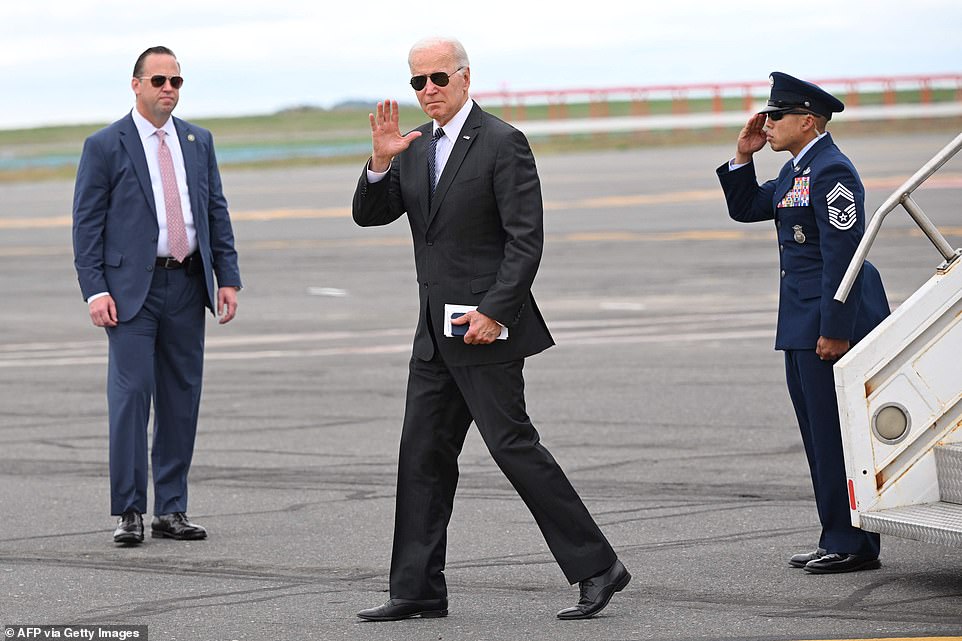 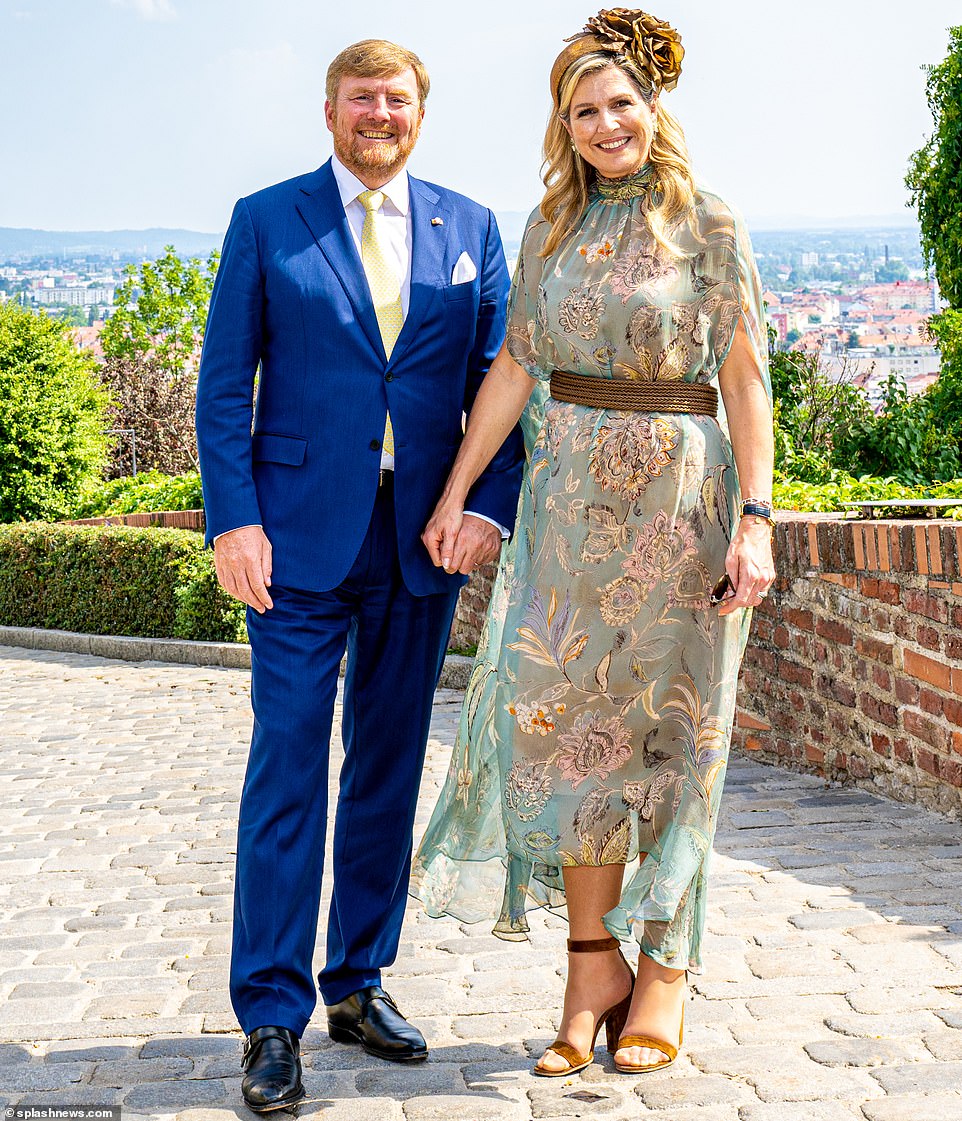 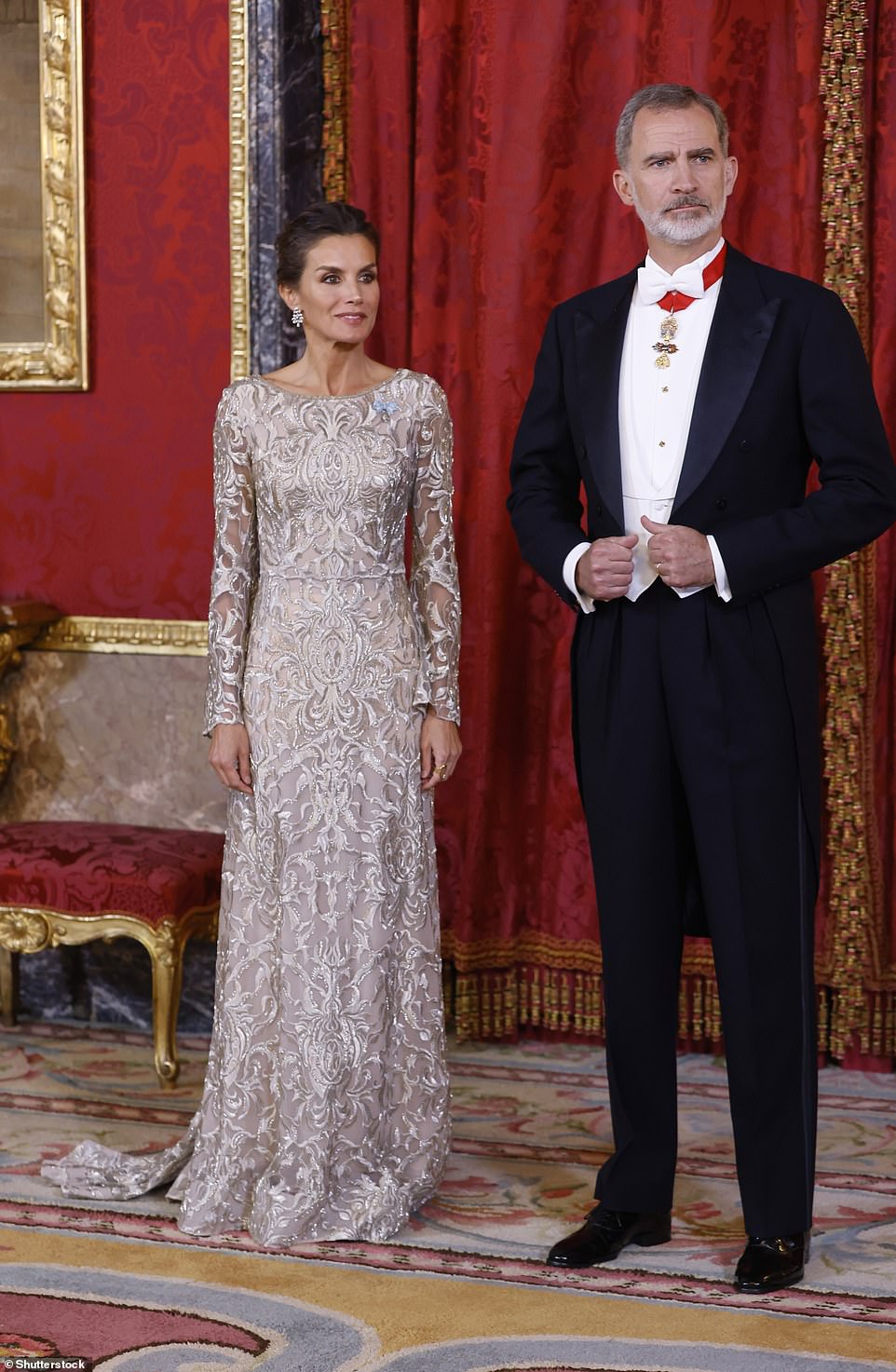 King Felipe VI, Queen Letizia of Spain recently paid tribute to their distant relative with a heartfelt statement. They have also confirmed their attendance to the Queen’s funeral

As the world mourns Her Majesty’s death at the age of 96, the globe’s most powerful men and women have been scrambling for seats amid limits on who can join the congregation of 2,000 VIPs.

No guest list has been published yet, but US President Joe Biden was among the first to declare he will be flying in with his wife Jill.

500 world leaders, foreign dignitaries and heads of state including Emmanuel Macron, Justin Trudeau and Japanese Emperor Naruhito will be at the historic service honouring Britain’s longest reigning monarch – the first full State Funeral that Britain has hosted since Winston Churchill died in 1965.

European royalty, who have deep ties to the House of Windsor, have all confirmed they will attend, including Belgium’s King Philippe and Queen Mathilde, King Willem-Alexander and Queen Maxima of the Netherlands and King Felipe and Queen Letizia of Spain.

The leaders of most Commonwealth countries are expected to be at the funeral, with New Zealand Prime Minister Jacinda Ardern saying she will make the nearly 24-hour journey with a delegation including Maori King Kiingi Tuheitiaand Victoria Cross for New Zealand recipient Bill (Willie) Apiata.

It is understood that all holders of the Victoria Cross or George Cross will also be able to attend the Queen’s funeral. 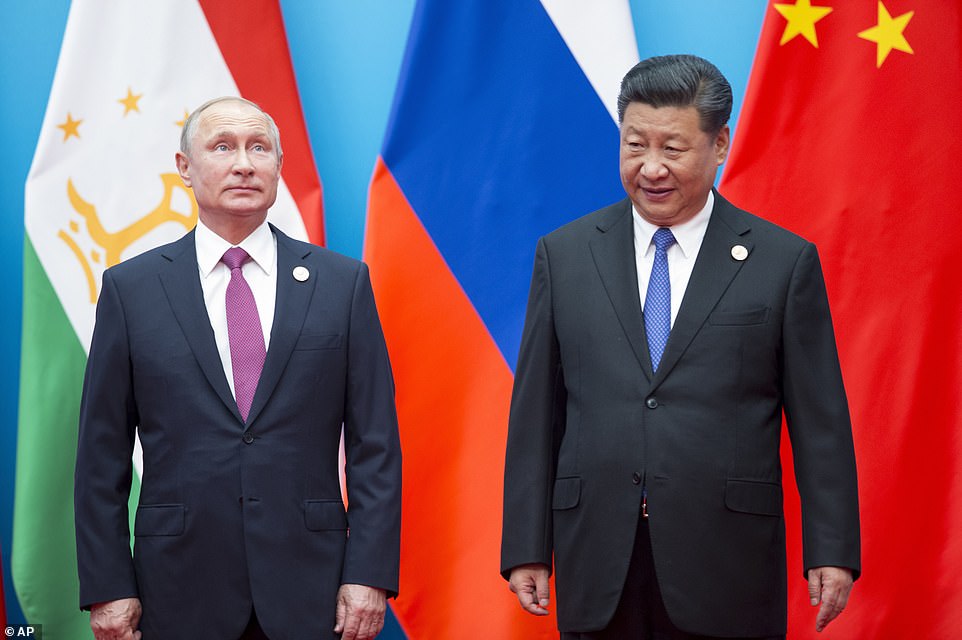 Russian President Vladimir Putin has not been invited to the funeral. Chinese President Xi Jinping has been invited, but is not likely to leave China for the first time in two years 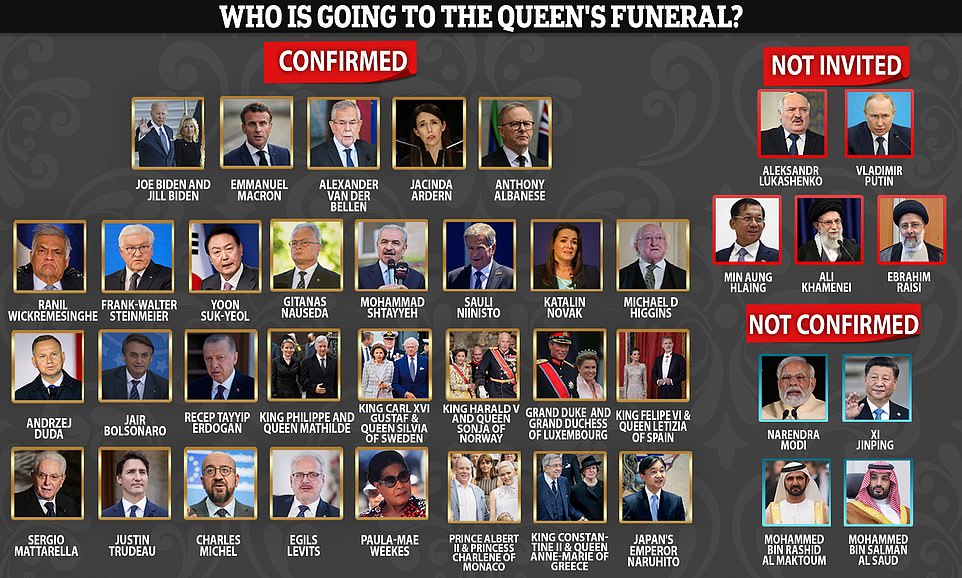 The leaders of Russia, Belarus and Myanmar won’t get an invite to the Queen’s funeral but a number of controversial figures including Erdogan and Bolsonaro are coming to London and other world leaders are yet to confirm including President Xi

Earlier this week, Vladimir Putin faced fresh humiliation on the world stage as he was snubbed along with his ally, Belarus’ Aleksandr Lukashenko.

Min Aung Hlaing of Myanmar will also not be asked to attend as relations between the two countries remain frosty since the violent military coup of 2021.

It is not thought the trip will be made by Ukraine’s president Volodymyr Zelensky, who took time out from organising his country’s fightback against Putin’s forces to sign a book of condolence for the Queen.

Buckingham Palace had earlier declined to comment on who is on the guest list and when it is expected to be finalised.

The Queen: All you need to know following her passing and a look back at her 70-year reign