Careless delivery drivers have been caught tossing boxes over gates, smashing them into customers’ front doors and even kicking them down driveways in shocking CCTV.

With locked down Australians turning to online shopping more than ever, furious customers have shared footage of some of their biggest delivery blunders.

One delivery driver was captured punting a package down a driveway, while another was caught tossing a box over a gate before it smashes into a resident’s front door.

In other vision, thieves are seen sneaking into people’s backyards to swipe newly-delivered packages.

Micheal, a disgruntled customer, spotted his package nestled in bushes and told A Current Affair that the delivery was a fragile birthday present worth $250.

But in CCTV footage, a delivery driver was seen kicking the package, which then rolled over.

He then takes a picture, confirming the package was delivered, before pushing it into the shrubbery.

Australia’s worst delivery drivers have been captured on CCTV kicking and tossing online orders (pictured, a man pushing a fragile package into a shrub)

‘We never got compensation for the goods. We got an email saying the driver will be spoken to, but that was it,’ Michael said.

Micheal said he had uploaded the footage to the courier, Aramex’s, Facebook page but it was swiftly deleted.

Another Aramex driver was spotted on CCTV footage delivering packages in his pyjamas.

The camera then captures a different man stealing the delivery in a brazen theft. 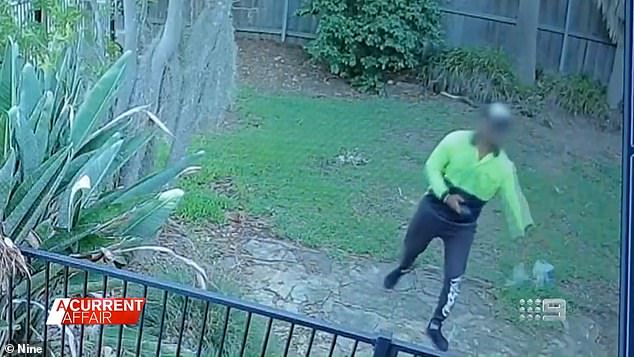 In footage shared by disgruntled customers, drivers have been spotted rolling packages into bushes and throwing orders into front doors

In other CCTV footage, packages are tossed into properties with no regard.

In a statement, Aramex claimed that the volume of online deliveries has skyrocketed since Australians have been in lockdown.

‘We have experienced an 80% increase in delivery and pick up volume across the network since the start of the pandemic in March 2020, and we are doing absolutely everything we can to deliver more than 190,000 parcels every day,’ the statement reads.