Revealed: The best ski deals to book now that snowfall has finally breathed life into the 2023 Alpine ski season, from Austria to France

By Neil English For The Mail On Sunday

Snowfall has finally breathed life into the 2023 Alpine ski season. Here are the best destination deals for those keen to take to the slopes at last…

It’s the highest city in France, and wind turbines spin on the summits close to the handsome fortified city of Briancon.

Other green initiatives include 1,400 solar panels and a snow-making system. There are even ticketless trials in place for ski passes to be loaded on to mobile phones.

Go skiing in Serre Chevalier (above) in south-east France, which aims to become the first totally self-sustainable ski resort

Seven nights’ B&B at four-star Hotel Le Monetier is £790pp based on two sharing, via booking.com.

So how do you get there? Departing March 4, take the Eurostar to Paris Gare Du Nord, change to Gare De Lyon to Bardonecchia from £146pp on rometorio.com, and then travel by taxi to Serre Chevalier for £106 one way on city-airport-taxis.com.

The holiday is based in Flaine – known for its impressive network of gentle nursery slopes, two excellent ski schools, sublime mountain views and enviable facilities for beginners. 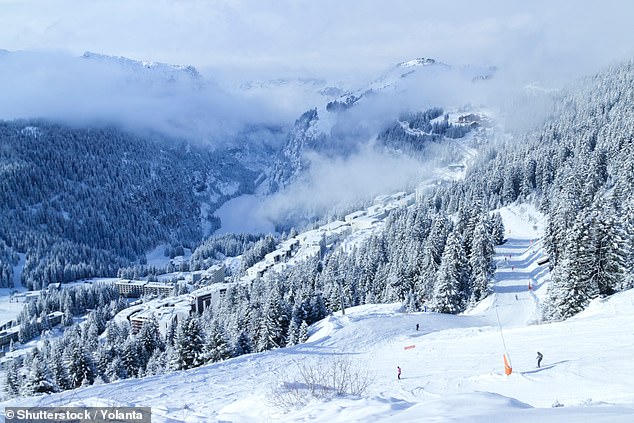 Crystal Ski has launched an all-inclusive, seven-day Slope Starter package to the premier French resort of Flaine (above) for less than £1,000

Crystal Ski will host welcome drinks, a quiz, a snow-shoe excursion and a prize-giving evening. The £995pp cost from March 11 includes a week in the three-star Hotel Le Flaine, return flights, transfers, lessons, equipment hire and a lift pass (crystalski.co.uk).

Elsewhere, Ischgl – an Austrian resort lauded for its superb ski area – is all the rage. At 2.30pm each Wednesday, strap on the snowshoes for a two-hour hike to Bodenalpe, where the scenic view of the Fluchthorn mountain is as mouth-watering as the meat fondue found in a nearby restaurant. The excursion costs £71pp and includes the guide, snowshoes, meal and return transfer.

Seven nights’ B&B in Hotel Binta from March 18 costs £1,019pp based on two sharing, including flights and transfers (inghams.co.uk).