Austria’s festive gift to the world: Discovering the tale behind the Silent Night carol in Salzburg

You may think of Salzburg as the epitome of a Christmas destination, but row back to the 19th Century and the Austrian city was anything but cheery.

The Napoleonic Wars had taken their toll, and frequent floods caused crop failures and food shortages.

The country needed something to lift its spirits, So in 1818, Joseph Mohr, a priest in the nearby village of Oberndorf on the banks of the Salzach river, decided a new carol might do the job.

He walked the few miles to the neighbouring village of Arnsdorf to see his friend – the schoolmaster, composer and organist Franz Gruber – and asked if he could come up with a tune to a poem he’d written two years earlier.

Spirit-lifting: Lizzie Enfield goes to the Salzburg region to learn about the origins of the Silent Night Christmas carol, which was written in a village near Salzburg city (above) in the 1800s

Neither man could possibly have envisaged how it would continue to resonate down the generations and across the globe.

Translated into 150 languages, the carol has been recorded by big hitters from Elvis Presley and Nat King Cole to Simon and Garfunkel and Sinead O’Connor.

Its success was largely down to two travelling bands of Tyrolean family singers, the Rainers and Strassers, who took it to the courts of Austria and Russia and as far as New York City.

Audiences assumed the carol was by a famous composer, perhaps Mozart, Salzburg’s most noted son, or Haydn or Beethoven.

Gruber heard of these rumours and set the record straight, penning a letter to stating his authorship. Early drafts of this letter are among the many artefacts, including Mohr’s guitar, now displayed in the Silent Night Museum in Hallein. 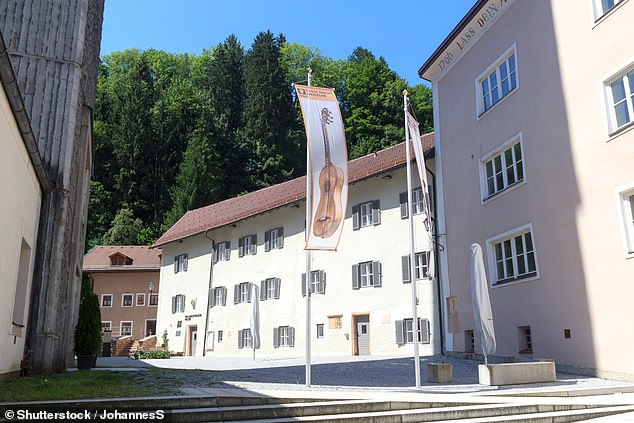 The Silent Night Museum in Hallein, pictured, holds early drafts of a letter written by the composer and organist Franz Gruber that stated his authorship of Silent Night, Holy Night

It is housed in Gruber’s later home beside the church where he was organist and choirmaster until his death in 1863.

But that is just one of six Silent Night museums in the area – as well as a carol that came to represent Christmas, the duo unwittingly spawned a Silent Night tourism industry to rival that of The Sound Of Music.

Today the main attraction is the Silent Night Chapel, built on the spot where Mohr and Gruber first performed. This simple building, with stained-glass windows which depict Mohr and Gruber on either side, attracts up to 5,000 visitors each year on Christmas Eve.

Others flock here during Advent when it is surrounded by one of Austria’s fabled Christmas markets, and just across the Stille Nacht-Platz is another museum that details the life of Mohr and his parishioners. 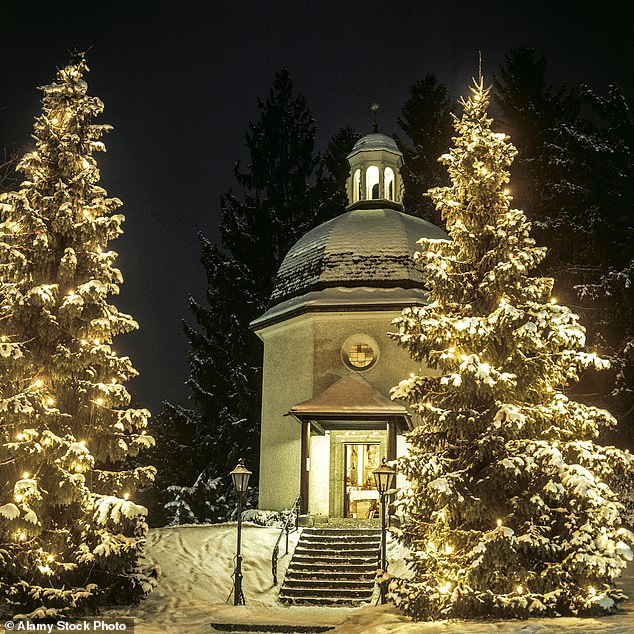 The Silent Night Chapel in Oberndorf, pictured, has been built on the spot where priest Joseph Mohr and composer Gruber first performed Silent Night

The schoolhouse in Arnsdorf also has an exhibition dedicated to its most famous incumbent, open only at weekends and holidays as, rather sweetly, it is still the local school.

You might think there is only so much to say about Silent Night, but the individual museums have been carefully curated to tell different sides of the story. The two men were not just the authors of an enduring carol but industrious figures whose personal stories shed light on the history of a time more often told through the movements of bishops, archdukes and emperors.

Like many people, I have sung Silent Night every Christmas as far back as I can remember. To embark on a pilgrimage that shed light on its roots imbued the carol with greater meaning. And to stand beside the altar on the spot where it was first performed with fellow pilgrims from as far afield as America and Japan was to experience the real poignancy of the words and music.

And around the world, well before Advent has even begun, the familiar melody resounds in shopping centres as much as it does in churches and school halls. But in Austria, commercial use of Silent Night is forbidden, and tradition dictates it must not be played until Christmas Eve. 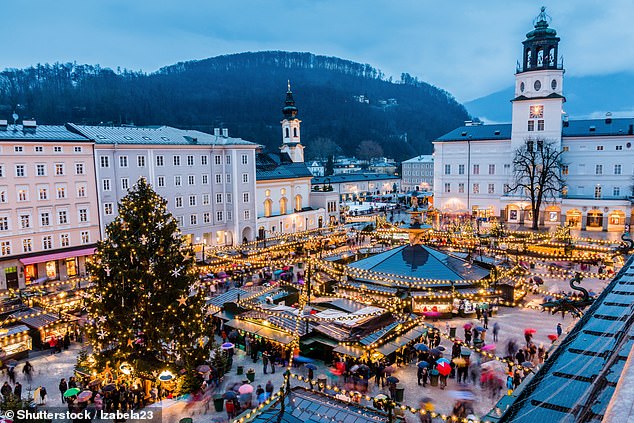 Only then does a sudden silence fall across the buzzing Christmas markets that surround Salzburg Cathedral, and in the tiny square in Oberndorf, and at numerous other churches across the country.

And only then does a solo voice cut through the cold night air with the poignant, instantly recognisable phrase.

Be it Stille Nacht, Douce Nuit, Noche de Paz or one of the many other incarnations of Silent Night, its message of hope remains the same. And therein lies the enduring appeal of a song which began in hard times but put Oberndorf and surrounding towns and villages firmly on the map.

Lizzie Enfield was a guest of Salzburgerland Tourism (salzburgerland.com). Double rooms at Hotel Stein in Salzburg cost from €280 per night (hotelstein.at).