Author and screenwriter Frank Cottrell-Boyce talks to ME & MY MONEY

Proud: Frank Cottrell-Boyce was ‘honoured’ to work on the 2012 opening ceremony

Children’s book author and screenwriter Frank Cottrell-Boyce worked on the opening ceremony of the London 2012 Olympic Games with director Danny Boyle for a year – and earned absolutely nothing for it.

Despite this, Cottrell-Boyce, 61, said it was an honour to be asked.

His latest novel for nine to 12-year-olds, Noah’s Gold, was published this month by Macmillan Children’s Books.

To know when you have got enough of it, and to be happy with that. Both of my parents left school at the age of 14.

My dad became a clerk at a shipping firm on the docks, and then went to night school to study to become a teacher.

My mum was a stay-at-home mother. For a long time when I was a child, we lived with my gran.

Then eventually my parents bought a house of their own. They were the first in their family to do so.

To buy your own house, instead of living in a council property, was seen as this wild, reckless move. My father felt like a duke living in that house, on an aspirational housing estate. My parents were content with what they had.

Not really. The year I earned the least was 2011, because I was mainly working on the opening ceremony of the Olympic Games. I didn’t get paid for that, but Danny Boyle asked me and it was an honour to accept.

I ended up getting a tax rebate because my earnings were lower than expected. That helped us get through the year.

My wife and I lived within our means and had savings. So even though I don’t think I earned anything that year, I wouldn’t say we struggled or worried about paying our bills.

It was a financial extravagance to accept the job, because it was a lot of fun – I had one of the most fulfilling years of my life. I’ll probably never do anything I’m so proud of again.

Yes, in 1985, for writing my first script for the soap opera Brookside. It took a week to write and, because the episode was repeated, I earned £3,700.

I had always wanted to be a writer and I couldn’t believe I was being paid that much to write. In today’s money, it would be like earning nearly £12,000 for a week’s work.

My wife and I thought money was coming out of taps. We were a young married couple with a baby and another on the way, and we couldn’t believe it.

What is the most expensive thing you have bought for fun?

A drawing of people sunbathing on a beach by Edward Ardizzone, an artist who illustrated classic children’s books. I love his work. It cost quite a lot, around £1,000, I think. I bought it about 15 years ago, around the time that my first children’s book, Millions, came out.

In purely financial terms, turning down big Hollywood jobs because I don’t want to be away from home.

There’s one big franchise I really love where that happened. I won’t name it because the screenwriter who took the job will know they were second choice. But, I could have done one of those films every year and got a bigger and bigger pay cheque.

Our monthly mortgage payments were far less than the rent we had been paying as students the year before. When we sold it 14 years later, it had almost tripled in value.

Yes. I’m obsessed with saving into a pension. I started when I was 25. I always knew income from writing would be volatile and, as I have seven children, I’m responsible for a lot of people and wanted to have savings. I have a good amount saved, all in ethical funds. 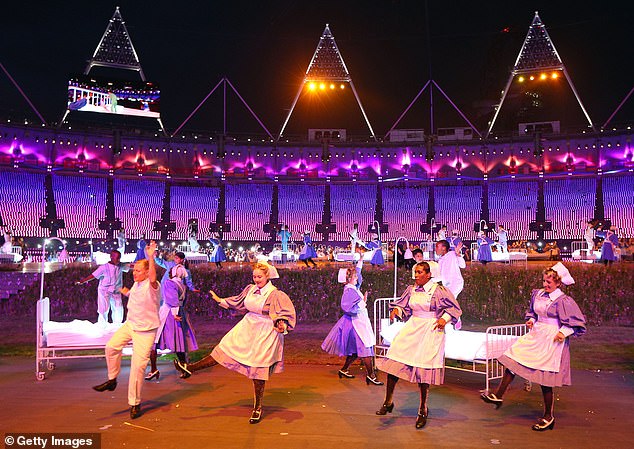 Honour: Frank Cottrell-Boyce says it was a financial extravagance to accept the London 2012 job, because it was a lot of fun

No. I don’t have the time or the inclination to do that. The thought of it makes my ears bleed.

To cut the cost of holidaying with seven children, we bought a whacking great big holiday home in south-west Scotland. I go there a lot to write.

Doing what I like for a living. There isn’t a huge amount of money in children’s novels, unless you’re JK Rowling.

I would simplify the tax laws and stop people setting up pretend companies, so there is less genteel tax avoidance.

Yes. I donate to Mary’s Meals, a charity that gives kids in developing countries one good meal at school each day, made with locally sourced ingredients. It’s a way of drawing children to school and injecting money into the economy.

To make sure we get rid of all our money before we die. As the industrialist and philanthropist Andrew Carnegie said: ‘The man who dies rich, dies disgraced.’