It may sound improbable, but it is something that author Kathryn Pearson, 35, claims to have been able to do for much of her life. And far from being an advantage, it often left her feeling bewildered

Being able to see things from the point of view of others is, unarguably, a life skill worth having. Even better, it may seem, to have empathy – the ability to understand and relate to how someone else feels, even if we don’t share those feelings ourselves.

But what if you could actually feel the emotions and even physical sensations of those around you?

It may sound improbable, but it is something that author Kathryn Pearson, 35, claims to have been able to do for much of her life. And far from being an advantage, it often left her feeling bewildered.

The married mother-of-one from Sheffield says: ‘I first started to realise I was different when I was at university.

‘I’d feel really strange being around so many friends at once because I couldn’t distinguish my feelings from theirs.

‘If someone was distraught over a boyfriend, I’d feel that intense anxiety, and if someone was really hung over, I would feel sluggish and befuddled.

‘Then someone else might be euphoric about an exam result, and I’d feel that too. It was exhausting, and I often needed a lot of rest after a social occasion.’

In her 20s, Kathryn was a schoolteacher. But after a typical day immersed in the emotions of pupils and teachers, she was in bed by 8.30pm.

She says: ‘I could walk into the staff room and sense the mood in there immediately. If there was someone stressed out, or angry, I would be too.’

Kathryn’s experiences are unusual, to say the least. But is she simply an eccentric? Or a fantasist?

Not so, according to the latest scientific research that suggests that so-called empaths – a term used to describe someone who can feel and absorb the emotional, physical and mental condition of another person without even talking to them – do indeed exist.

These people are believed to have a form of synaesthesia, a recognised yet bizarre neurological phenomenon where the senses are blurred, meaning that people ‘hear’ colours, ‘see’ sounds or ‘taste’ words. 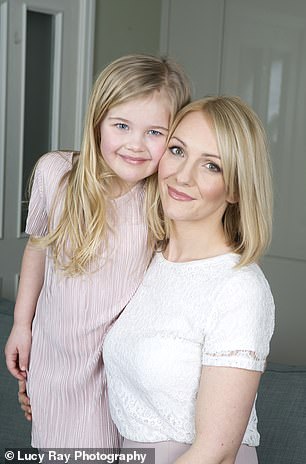 Kathryn, with Yasmin, six, has a small group of friends she prefers to talk to online and sees close family and friends in small doses

Synaesthesia affects both sexes equally and runs in families: at least 40 per cent of those who have it know another family member who is also affected.

And there is physical proof. Scans show white matter, tissue that connects different regions of the brain, is organised differently in people with synaesthesia.

So parts of the brain linked with colour-recognition become active when words are heard, for instance, and a person claims to ‘see’ shapes, colours or patterns when they hear poetry, or songs.

Now, a team of researchers has identified a different, more remarkable form of synaesthesia: the power to feel the emotions and physical sensations, and even pain of others as if it were your own.

Dr Natalie Bowling, psychology researcher at the University of Sussex, estimates that two per cent of the population experience so-called ‘mirror-touch synaesthesia’. She explains: ‘Mirror-touch synaesthesia has been less well known until now. A typical example is when someone sees someone being touched on the face and they feel it on their own face.’

Such individuals are often so highly attuned to other people’s moods, good and bad, that they feel the emotions of those around them, sometimes to an extreme.

Although empaths do not qualify as having a medical condition, or even a marked abnormality, those who experience the strange phenomenon are often hindered by their gift.

Dr Bowling says: ‘Some people can find it too much. One woman I know of became a recluse. She couldn’t leave the house. She found it hard to even be with her family during meal times.’

Despite the downsides, Kathryn Pearson has also learned there are advantages. ‘I stopped regular school teaching, and now teach yoga to teenagers,’ she says. ‘I can walk into the room and within seconds recognise what people need from the class. There is no point in going in all guns blazing, if what a person really wants is a simple relaxation routine. I’m lucky in that I can pick up on those emotions immediately.’

Yet social situations still remain difficult. Kathryn says: ‘It is like having a massive antenna and I draw everything in. I pick up on who is annoyed, who is in a mood with who and why. I find it almost impossible to have a one-to-one conversation with someone.’

Try THIS stop shoulder pain… with a finger stretch

There is one common injury that no amount of generic stretching will fix: shoulder strains. This is largely because the deltoid muscle at the top of the shoulder is an area that is hard to target using simple movements.

But an answer lies in the fingers. Nerves that deliver pain signals to the brain travel between the extremities and the spine, neck, shoulders, biceps and forearms. Stretching the fingers and thumbs sends ‘pain-relief’ signals to the arms and shoulders, via the nerves, alleviating tightness and pain.

Give it a go once a day for a week, and see how you feel.

l Sit on a chair and stretch one arm out in front of you, palm up.

l Use your free hand to bend the fingers of the opposite hand towards the floor – until you feel a deep stretch running through your palm and up your forearm.

l Continue with each finger, including the thumb, holding for one minute each. 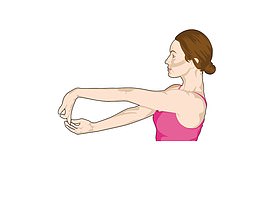 Kathryn has a small group of friends she prefers to talk to online and sees close family and friends in small doses. She says. ‘My younger self would rush in and want to help people when I picked up on their emotions.

Today I realise that even if I can sense someone is desperately sad, often people don’t want to share their inner thoughts and feelings, as those feeling can sometimes linger.’ She has used her experiences to write a guide for parents, titled The Sensitive Subject: A Parent’s Guide To Understanding Their Sensitive Child.

However, not everyone believes empaths exist. Professor Michael Pluess, head of psychology at Queen Mary University of London, says empathy is a merely personality trait, not the definition of a type of person.

‘It’s fine to talk about empathy. But what do people mean by being an empath? It’s like calling someone an extrovert. It just isn’t a type of person.’

Others are convinced. Professor Abigail Marsh, a psychologist and neuroscientist at Georgetown University, Washington, refers to such people as altruists and says they are the opposite of psychopaths, who completely lack empathy.

Suffolk-based psychotherapist Lizzie Falconer, who also identifies herself as an empath, says: ‘Ten years ago, if I had mentioned to someone that I feel other people’s feelings, I’d have been thought mad. But there has been a shift in my field of work. Now it is recognised as a gift.’