Lee Child, the creator of Jack Reacher, has admitted he doesn’t like his character, ‘that much.’

Despite Reacher having millions of fans across the world, Mr Child said he hasn’t fallen in love with the character which means he can be hardhearted towards him.

‘I need to like him less than you’re going to like him,’ Lee Child, 65, told The Guardian and added that he had originally planned to end his thriller series by having his character, a former US army military policeman, bleed to death on a ‘filthy motel bathroom floor.’

I don’t like Reacher that much; I’m in total control of him. I’m the only person in the world he’s scared of,’ Mr Child said.

Despite Jack Reacher having millions of fans across the world, Lee Child  (pictured) said he hasn’t fallen in love with the character which means he can be hardhearted towards him

Lee Child’s 24 novels about Reacher have sold more than 100 million copies around the word.

Tom Cruise played the title role in two movies about the 6ft 5in loner who rights wrongs and the n moves on.

Amazon won the rights to the Jack Reacher TV series last year. Season one will be based on the first Jack Reacher novel released in 1997, The Killing Floor. Tom Cruise will not reprise his role in the TV adaption.

Mr Child said he was initially planning on concluding the series with Reacher’s ‘brutal killing.’

‘Initially I had the idea that in the last book, he would die in a blaze of glory or noble self-sacrifice. It would have been difficult to plot, because he’s a very capable guy, but there would have been some situation where he’s either got to give up the person he’s protecting or give up himself, and obviously he’ll give up himself and bleed out on some filthy motel bathroom floor,’ he said. 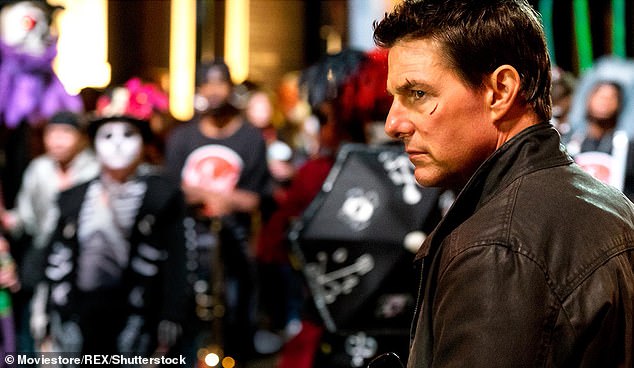 Tom Cruise as Jack Reacher in Never Go Back in 2016

He had the title, ‘Die Lonely,’ for the book that never was but had a rethink after mentioning it, on account of his fans, who protested.

The Reacher series is to be handed over to Lee Child’s brother, Andrew Grant, rather than Child continuing it himself.

‘Let’s let Andrew keep it going.’ He really is me 15 years ago, still full of energy, still full of ideas, and so I think this is the perfect solution,’ Child said.

He added that he’s put his efforts into stopping Reacher from changing as a character.

‘That’s why people love series, it’s like putting on a comfortable old sweater, they know what they’re going to get,’ he said.