A mother’s seeming harmless anecdote about her preschooler daughter complaining about a ‘boy dentist’ unexpectedly stirred controversy on Twitter.

Author Alissa Nutting shared how her daughter’s trip to the dentist turned into a tearful event when she began to cry upon seeing the dentist was a man.

‘My daughter started crying at the dentist office bc the dentist “is a boy” and the dentist said “sorry, there are no girl dentists at this office” & my daughter looked at me & said “why did we come here,”‘ she wrote on Twitter on Monday. Angry comments soon followed, attacking the mother and the child for the tantrum

Immature: Users began to personally attack the mother and author for her harmless tweet 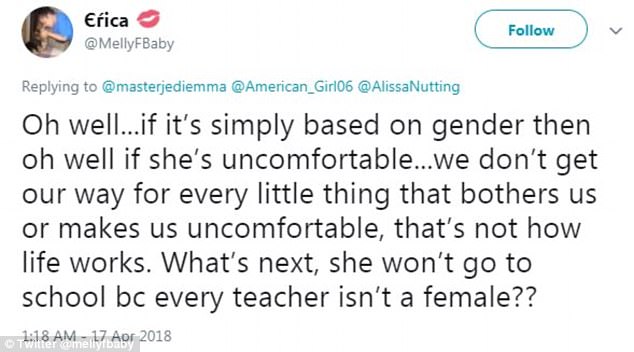 Twitter user Erica said: ‘What’s next, she won’t go to school because every teacher isn’t a female?’

However not everyone was amused by the little girl’s tantrum.

Conservative author Ben Shapiro was one of the first to throw a jab a Nutting for her tweet.

‘Perhaps you should have informed your daughter that as of 2014, 47.7% of all dental students were women, rather than letting her believe that your unrepresentative dentist office is an indicator of widespread sexism,’ he wrote.

Others rallied behind him with less founded arguments.

‘Jesus Christ, imagine what she’s gonna be like when she grows up if you pander to this bs now. Tell her to shut her whiny ass up or her teeth will go mouldy & fall out!’ Helen Wood wrote.

‘So you’re dissing a medical professional solely on gender and not on qualifications. That’s pretty awful,’ another user wrote.

‘Oh well…if it’s simply based on gender then oh well if she’s uncomfortable…we don’t get our way for every little thing that bothers us or makes us uncomfortable, that’s not how life works. What’s next, she won’t go to school bc every teacher isn’t a female?’ Twitter user named Erica wrote.

Some of the threats got so out of hand they threatened violence and death, one labelled the child as a ‘little feminazi’.

‘Why didn’t you slap your little feminazi brat? Did she not ask the dentists which of the 1000’s of genders they identify as, at that moment? Bigoted little s*** needs reporting to the gender stazi’s,’ one user attacked. 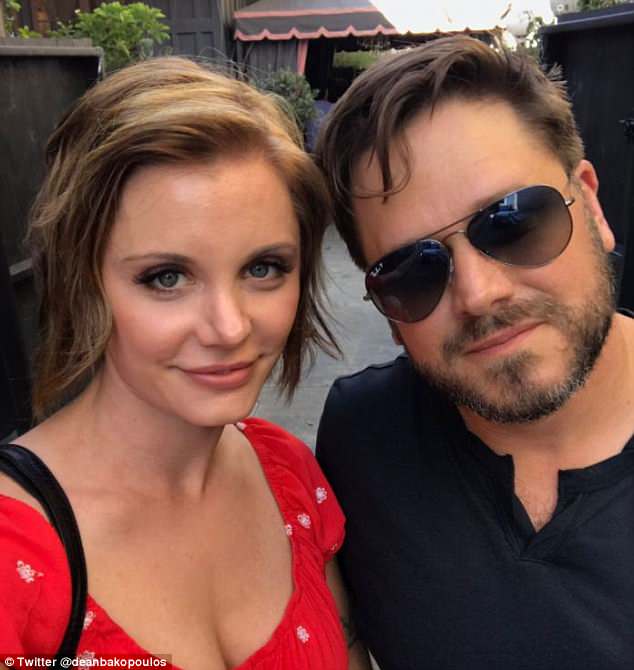 Stronger together: Nutting pictured left with Bakopoulos right, who came to her defense 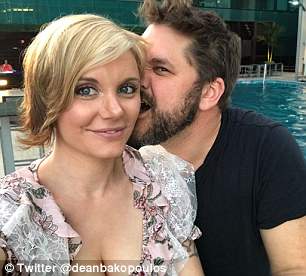 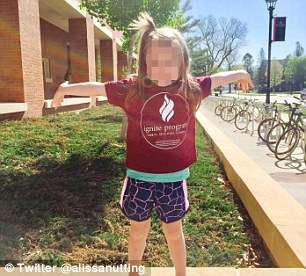 The couple, pictured left, said that they helped their crying daughter, pictured right, get through the appointment 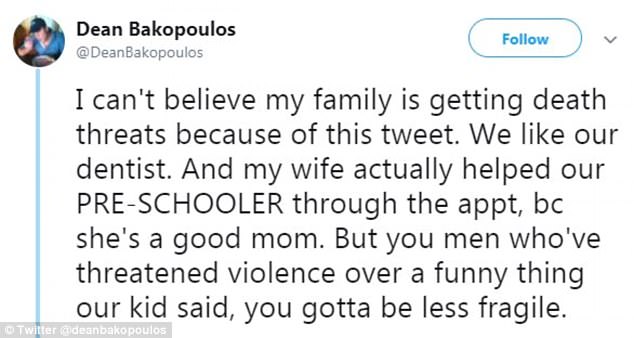 Nutting’s husband Dean Bakopoulos took to Twitter to quell the controversy sharing a gif that said ‘You need to relax’.

‘I can’t believe my family is getting death threats because of this tweet. We like our dentist. And my wife actually helped our PRE-SCHOOLER through the appt, bc she’s a good mom. But you men who’ve threatened violence over a funny thing our kid said, you gotta be less fragile.

‘And I can’t believe I have to explain that a funny tweet meant for our friends and fans was not a call to ban men from the dental profession. We would post some pics with our very kind dentist if you want, but I hesitate to share anything with the maniacs on this site.

‘But rest assured our four year old got her teeth cleaned by our local dentist and did not destroy the patriarchy yesterday. Now please leave our family alone.

‘And rest assured that my smart successful wife is also an amazing mom, and has always muted every troll anyway. So if we could go back to tweeting about junk food, that’d be cool,’ he wrote.

He added on Wednesday that his wife ‘NEVER reads the comments’. Nutting never commented on the Twitter firestorm that ignited in her mentions.

Parents familiar with the tendencies of vocal toddlers supported the couple’s actions and defense of their child.

‘I’m so sorry your family is facing the worst of the internet. FWIW, I have a 3yr old girl who also has strong opinions on wanting girl professionals, not bc I pushed an agenda, but bc she’s 3. Kids this age have RLY STRONG gender feelings or has no one met a child,’ one mother wrote.

‘Wow. I enjoyed your wife’s tweet when I first saw it & chuckled at your kid’s comment. Then seeing your tweet, i went back & read some replies. OMG WHY are people like this???’ another wrote.