The rate of autism diagnoses has rocketed 15 percent in just one year, a new report reveals.

One in 59 American children suffers from autism spectrum disorders, up from one in 68 reported last year, according to new data from the Centers for Disease Control and Prevention released today.

It follows a steady increase: ASD prevalence has grown more than three-fold in the last two decades with the most drastic increases in black and Hispanic populations who were previously much less likely to be diagnosed than white children.

Experts believe the spike may be the result of improvements in diagnostic methods, with more doctors testing for the condition, especially in black and Hispanic communities. The condition is also linked to children having older fathers and being born prematurely – both of which are increasingly common.

A new report has revealed one in 59 children in the US have autism spectrum disorders, up from one in 68 reported last year. In the last two decades diagnoses have more than tripled

The newly released data was collected by the CDC’s Autism and Developmental Disabilities Monitoring Network, a tracking system that provides estimates of the prevalence and characteristics of ASD among more than 300,000 eight-year-old children.

ASD refers to a range of similar developmental disorders characterized by difficulties with social interaction, communication challenges and a tendency to engage in repetitive behaviors.

Those with ASD may also experience cognitive, learning, emotional and behavioral problems and could have attention deficit hyperactivity disorder (ADHD), anxiety or depression.

Thirty percent of children with ASD have a non-verbal IQ below 70, and more 15 percent have below 50.

While there is no cure for ASD, it can be managed with speech and language therapy and educational support, which is more effective the earlier it starts.

According to the CDC, people with autism have trouble with social, emotional and communication skills that usually develop before the age of three and last throughout a person’s life.

However, the CDC study found that less than half of the children identified received their first autism diagnosis by the time they were four years old.

More than 85 percent of children with autism had exhibited developmental problems by the time they were three years old, only 42 percent received an expert evaluation by that age.

The researchers said the lag between first concern and first evaluation may affect when children with autism can begin getting the services they need.

‘Parents can track their child’s development and act early if there is a concern,’  said Dr Stuart Shapira, associate director for science at CDC’s National Center on Birth Defects and Developmental Disabilities

‘Healthcare providers can acknowledge and help parents act on those concerns. And those who work with or on behalf of children can join forces to ensure that all children with autism get identified and connected to the services they need as early as possible.

‘Together we can improve a child’s future.’

Together the 11 communities represent about eight percent of eight-year-old children in the US.

Some of the increase could be explained by improvements in screening methods particularly among minority populations, although autism is still more likely to be identified in white children than in black or Hispanic children. 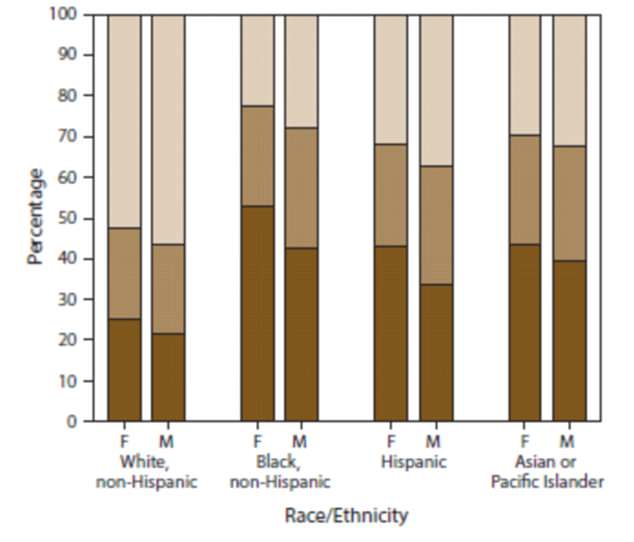 The CDC graph above shows the percentage of children with autism who are considered intellectually disabled based on their IQ, broken down by race. The dark brown represents an IQ of less than 70, medium brown is 71 to 85 and light brown is above 85

‘Autism prevalence among black and Hispanic children is approaching that of white children,’ Dr Shapira said.

‘The higher number of black and Hispanic children now being identified with autism could be due to more effective outreach in minority communities and increased efforts to have all children screened for autism so they can get the services they need.’

The prevalence of autism varied widely among the 11 communities in the report, although five reported similar estimates of 1.3 percent to 1.4 percent.

The highest rate was found in a community in New Jersey with an estimated of 2.9 percent.

Some of the regional differences in autism prevalence estimates among the 11 communities might be due to differences in how autism is being diagnosed and documented.