Avebury started life 4,500 years as monument to honour people living in a humble HOUSE on the site

Stonehenge’s neighbour Avebury started life 4,500 years as monument to honour people living in a humble HOUSE on the site

By Victoria Allen for the Daily Mail and Cheyenne Macdonald For Dailymail.com

A prehistoric monument that boasts the world’s largest stone circle and now stands among the World Heritage Sites may have been designed to commemorate a single, humble house when it was built more than 5,000 years ago.

Little is known about the history of Avebury henge, which sits less than 20 miles from its more famous neighbour, Stonehenge.

But, recent research suggests the complex megalith had simpler origins than one might expect.

A new study has found that the mysterious Neolithic monument on Salisbury Plain may have been built around the site of a ‘relatively modest dwelling’ that stood there before it.

But thanks to its more famous neighbour, Stonehenge, we know very little about Avebury henge. Now a study suggests the mysterious monument on Salisbury Plain may have been created to commemorate a humble house on the same site (stock)

The theories about why Stonehenge was built include that it was a temple, a burial site or a creation of aliens visiting Earth.

And, the story of Avebury’s construction has remained just as mysterious. In the past, it’s been suggested that the site had medieval origins.

The latest findings, however, further support its ties to the Neolithic period.

A research team led by the University of Leicester has now found evidence of pits and gullies in the ground for its walls, plus bowls and flint tools that are all indicative of Neolithic craftsmanship.

They say Avebury henge, made up of multiple stone circles and standing stones, was probably built later to commemorate the people living in the house – who were so important they were honoured in this way. 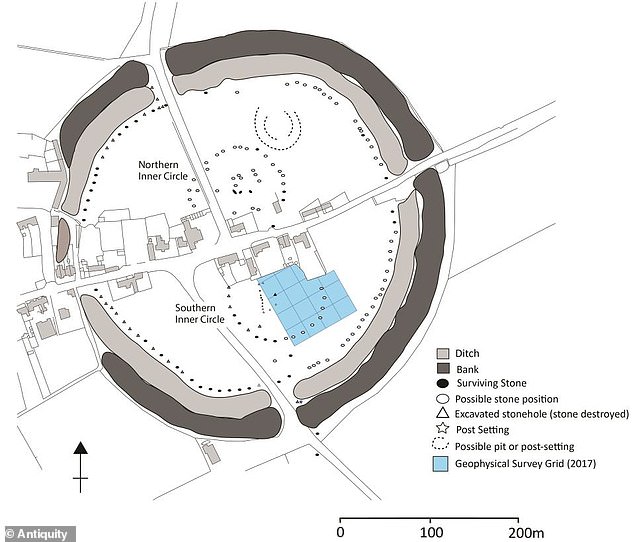 Researchers found evidence of pits and gullies in the ground for its walls, plus bowls and flint tools which suggest the house was built in the Neolithic period. The site is mapped above, revealing where there may once have been posts and stones that have not survived to today

Professor Joshua Pollard, part of the team behind the theory from the University of Southampton, told the New Scientist: ‘It’s a monument that developed in a series of stages.’

The researchers, writing in the journal Antiquity, state: ‘If our new interpretation of the structure within the Southern Inner Circle as an Early Neolithic house is correct, the implications for understanding Avebury’s origins are profound – the ancestry of one of Europe’s great megalithic monuments can be traced back to the monumentalisation of a relatively modest dwelling.’

The modest house Avebury is thought to honour would have stood for just one or two generations and measured just 22 feet (6.9 metres) across.

But the family that lived there, or their descendants, are thought to have made enough of an impression to inspire a World Heritage Site. 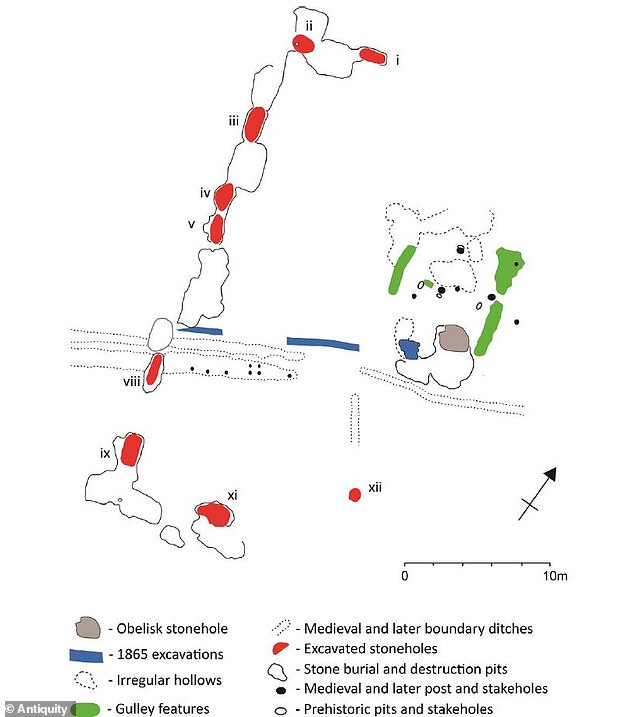 The graphic shows the features excavated during the 1930s – the last time a major investigation occured at the site. At the time, researchers identified stoneholes (red) and gullies (green) among other features

Researchers used ground-penetrating radar to search for signs of the house, as the last major excavations took place in the 1930s.

They say the henge has gullies thought to have been trenches for the house’s walls and pits which may have held posts for an internal dividing wall.

They dismiss suggestions that any house was Medieval in origin, based on the Neolithic pottery and flint tools including scrapers, a knife and axe found there.

The structure of the house, north of one of the monument’s largest stones called the Obelisk, is also thought to be similar to other Neolithic houses in Britain and Ireland.