Keep a look out for the kitchen sink. That’s all I can say after watching Avengers: Infinity War, because it must be in there somewhere. After all, everything else is.

More superheroes than you can shake a stick at (I stopped counting at 20), more plot than at least this poor human brain can comprehend, and enough sharp one-liners to take your mind off minor facts such as… well, the very future of the universe being at stake.

My goodness this is fun. Yes, there are probably too many characters from Marvel’s so-called Cinematic Universe for everyone to get a fair share of screen time and yes, the plot bounces around the galaxies – and Edinburgh, I should add – at a brain-befuddling rate, but the film-making ambition is a joy to behold, the delivery impressive and, as for the spine-tingling ending, well it’s close to genius. 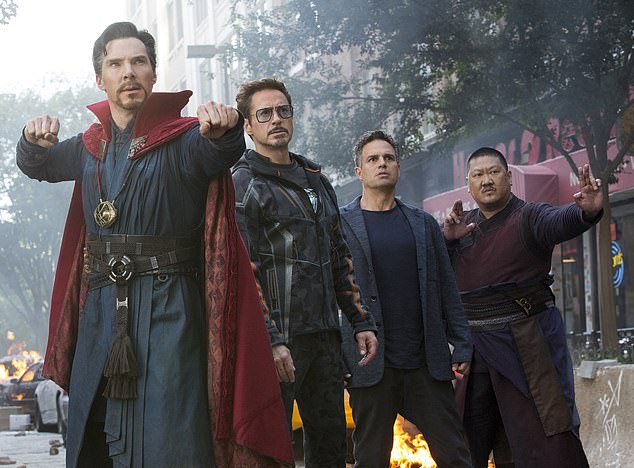 There are probably too many characters for everyone to get a fair share of screen time. Above: Benedict Cumberbatch, Robert Downey Jr, Mark Ruffalo and Benedict Wong

The Russo brothers – Anthony and Joe – who directed the last two Captain America films and who direct again here, have much to be proud of.

Disney, the studio that now owns the Marvel franchise, doesn’t want me to say very much about many of the plot details.

So all I will say is that this is very much the first of two films and that the screenplay writers, Christopher Markus and Stephen McFeely, despite their slight fondness for formula and repetition, have come up with a truly brilliant device to ensure that we’ll all be rushing to see the as-yet-untitled second film next year. 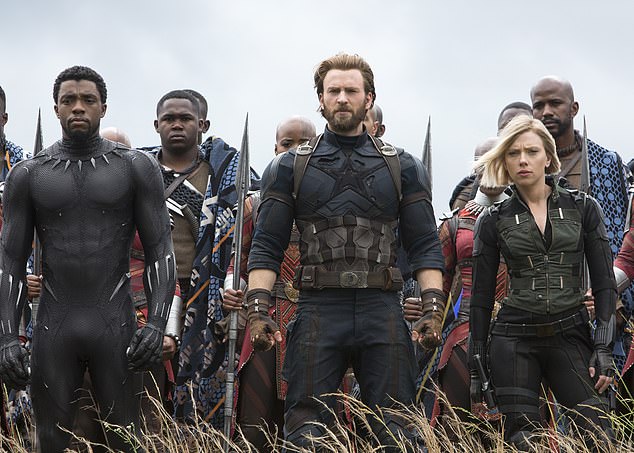 Still, the film-making ambition is a joy to behold, the delivery impressive and the spine-tingling ending is close to genius. Above: Chadwick Boseman, Chris Evans, Scarlett Johansson

This is the movie that brings together two separate Marvel franchises – the Avengers and Guardians Of The Galaxy – and Iron Man, Hulk etc reluctantly team up with Peter Quill and his normally cooler, funnier, sillier gang because… well, as I say, the very future of the universe is at stake.

Why? Because the vast and seemingly unstoppable villain Thanos is collecting ‘infinity stones’ that will give him control of everything from time and space to more abstract matters such as mind and soul.

Having seen the trailer, I was worried about Thanos – he was surely too big, too obviously a visual effect to convince. But in the film itself he becomes ever more real as the story moves on, helped by the fact that his size seems to change from scene to scene. 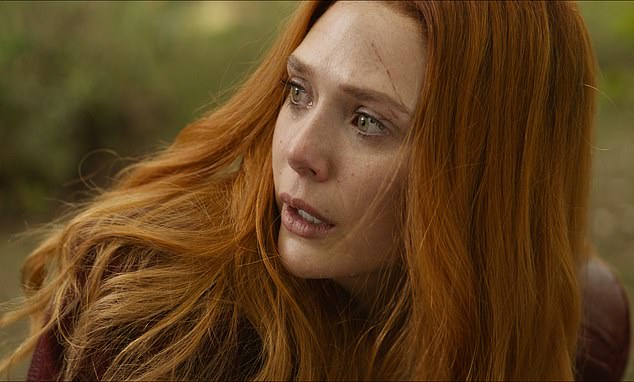 Look out for a skirmish that absolutely chimes with these Time’s Up times with a trio of kick-ass female characters. Above: Elizabeth Olsen, who has a good film

Also, the visual effects are good enough for us to see the actor playing Thanos – Josh Brolin – underneath. He may be a big old baddie but this is one inter-galactic villain that sheds real tears too. Ah, but for whom?

Some of the big set-pieces are wonderful: I loved the attempted kidnapping on, around and above Edinburgh’s Royal Mile – Waverley Station will never be the same again now I know that Scarlet Witch (Elizabeth Olsen, having a good film), Vision (Paul Bettany) and Captain America (Chris Evans) have all been there – and, after the phenomenal success of Black Panther, it’s good to return to the wide-open plains of Wakanda for another climactic battle.

Look out, in particular, for a skirmish that absolutely chimes with these Time’s Up times with a trio of kick-ass female characters. 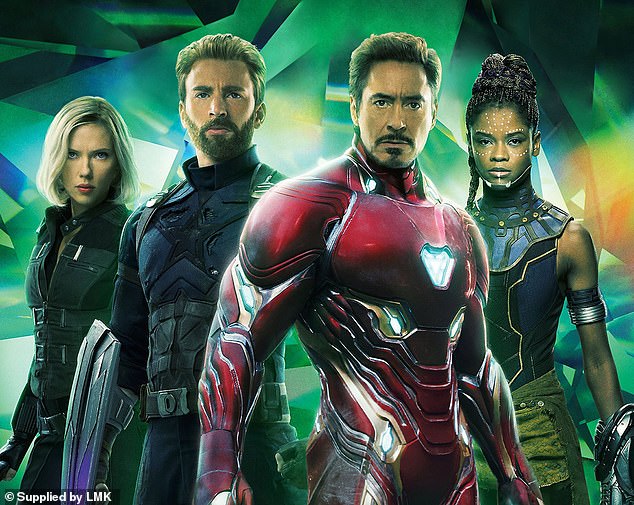 While I’m sure hardcore Marvel fans will want to give it five stars, there’s too much here that smacks of overkill. Above: Scarlett Johansson, Chris Evans, Robert Downey Jr, Letitia Wright

In a film in which new rivalries emerge (I loved Quill trying to have a deeper voice than Thor) and old relationships are revealed, who stands out from the crowd?

I always warm to Robert Downey Jr as Tony Stark/Iron Man, here cast in the role of reluctant mentor to the youthfully impetuous, pop-culture-quoting (‘Have you seen Aliens?’) Spider-Man (Tom Holland).

And the other two Chrises – Hemsworth and Pratt (as Thor and Quill) – can be relied on to make me laugh. 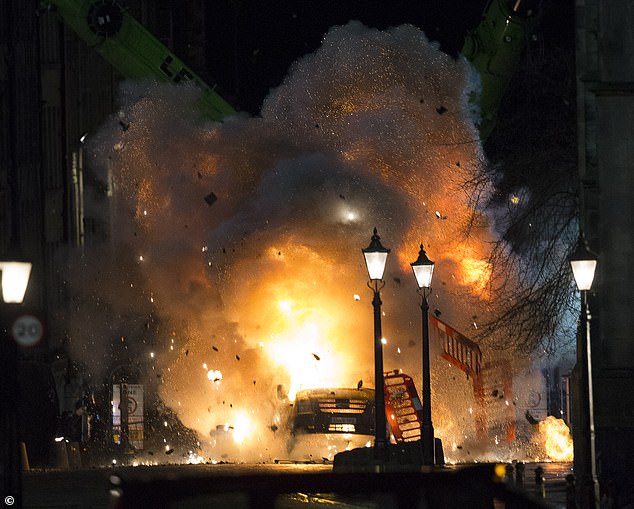 I loved the attempted kidnapping on, around and above Edinburgh’s Royal Mile (above) – Waverley Station will never be the same again

This time around Zoe Saldana (as the glamorous Gamora) and Olsen have important parts to play, although – perhaps a shade predictably – by providing the story’s heart rather than its humour.

While I’m sure hardcore Marvel fans will want to give it five stars, I can’t quite match their enthusiasm. There’s too much here that smacks of overkill, too many moments when I was left thinking ‘Who?’ or ‘What?’

But it’s huge fun, the cliffhanger ending is inspired and I can’t wait to see what happens next.

Another week, another film set in the Channel Islands but, as its menacing title suggests, Beast has little of the lightweight appeal of The Guernsey Literary And Potato Peel Pie Society.

Set on Jersey and much darker and stranger in tone, it also features a belter of a central performance from Jessie Buckley, currently on TV in The Woman In White.

Here she plays Moll, a young, unstable-looking woman who’s grown up in a family dominated by her controlling mother (Geraldine James) and where she’s constantly upstaged by her siblings. 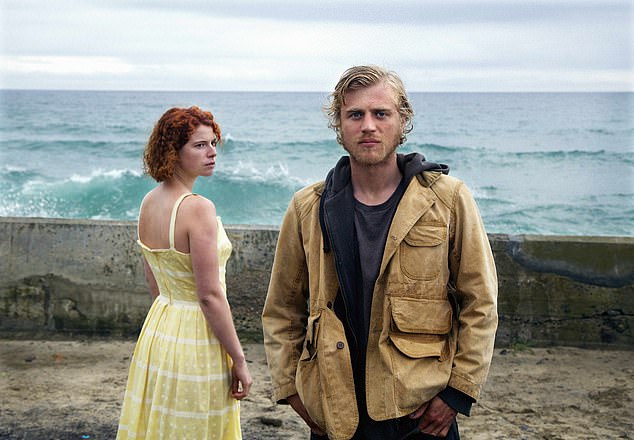 Jessie Buckley (above with Johnny Flynn) is wonderful as Moll, a young, unstable-looking woman who’s grown up in a family dominated by her controlling mother

So when her own birthday party is hijacked by her sister’s announcement that she’s expecting twins, she gulps down a couple of furious glugs of vodka and flounces out. She’s also bleeding from her hand, having deliberately scrunched a broken glass into her hand. It’s the first hint of dark secrets to come.

Very little is spelled out, but a sense of narrative accumulates through actions, detail and artfully created atmosphere.

Such as the facts that someone – presumably the beast of the title – is kidnapping and killing young teenage girls and that Moll’s new boyfriend Pascal (Johnny Flynn) is among the chief suspects.

While some of the supporting performances don’t measure up, Buckley is simply wonderful as Moll, giving a fearless, totally committed performance.

Odds on to be one of the top ten British films of the year.