AVI GLOBAL TRUST: £952m fund that seeks out value others have missed

AVI GLOBAL TRUST: Seeking out value others have missed and avoiding buying shares in big name growth stars like Amazon or Apple

Compared to most other global investment trusts, AVI Global has negotiated the tricky stock market conditions of the last year remarkably well. Although generating overall losses of just under four per cent, they are considerably less than the 14 per cent registered by the average global fund.

The reason for the relative outperformance is the defensive nature of this £952million stock market-listed investment trust. Manager Joe Bauernfreund, chief executive of investment house Asset Value Investors, is not interested in buying shares in growth stocks such as Amazon, Alphabet or Apple.

His whole modus operandi is built around searching for investments that are undervalued by the market, but which offer long-term potential.

It’s a process that involves a lot of research – the fund draws upon a ten-strong bank of in-house analysts – and not that many companies fit its bill. It’s also a strategy not without risk – some companies remain forever undervalued – but it works. Over the last five years, it has produced returns of 42.9 per cent, compared to 15.6 per cent for its peer group.

Bauernfreund says: ‘We like to buy quality businesses at a discount to their true value. In other words, they are mispriced by the market.

‘If our analysis is right, the trust in time benefits from a double whammy – a premier business delivering good financial results and driving its share price upwards, and in time an eradication of the discount.’

He adds: ‘What we do is something quite different from our global fund peer group.’ The portfolio usually comprises no more than 40 stocks, with the top ten holdings accounting for more than 61 per cent of assets. ‘It gives us a better chance of outperformance,’ he says.

Among its biggest holdings is French luxury fashion house Christian Dior, chaired by Bernard Arnault with its shares listed in France. The Arnault family own more than 90 per cent of Dior.

In turn, Dior has a 40 per cent stake in LVMH, a company that owns prestigious brands such as Bulgari, Givenchy, Louis Vuitton and Veuve Clicquot.

‘Dior’s main asset is its holding in LVMH,’ says Bauernfreund. ‘Dior’s shares trade at a discount – and have done so ever since Covid became an issue in 2020. 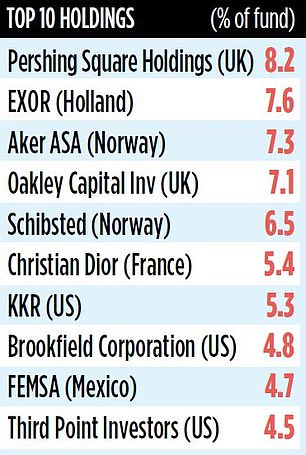 ‘We see this as an opportunity to get cheap exposure to the growth story that is LVMH. For the past three years, LVMH has weathered all the storms it has encountered.

‘At some stage we anticipate the Arnault family will take Dior private, which should be a positive for shareholders like us as we are likely to get a price that is closer to the value of the company’s assets.’ Bauernfreund says market conditions have been difficult, but the trust remains fully invested. ‘Yes, the outlook is uncertain, but nervous markets give us the opportunity to identify good buying opportunities that can produce some idiosyncratic returns.’

One quirk of the trust is that its own shares stand at 8 per cent discount to their underlying asset value. So in effect, investors could buy attractively priced shares in a trust that in turn hunts down undervalued assets. AVI Global currently generates an annual income of 3.3pence a share and the trust’s board is determined to at least maintain the dividend for the foreseeable future.

Reassuringly, the fund has more than a year and a half’s dividends tucked away in its locker which can be drawn upon if needed.

Dividends are paid twice a year and the trust’s total annual charges are just under 0.9 per cent. The stock market identification code is BLH3CY6 and the ticker AGT.