Avicii takes over Spotify charts following his death in Oman

Avicii has stormed the Spotify charts as fans remember his greatest hits after his sudden death aged 28.

The electronic musician passed away in Muscat, Oman, on April 20 while on holiday, sparking an outpouring of grief among his admirers and fellow artists.

Now the world-famous Swedish DJ, whose real name is Tim Bergling, has dominated the Spotify charts, with an incredible 10 tracks in the top 50 global chart.

Avicii aka Tim Bergling in concert in Union Square Park, San Francisco. He has had 10 tracks in the top 50 global chart on Spotify since his death 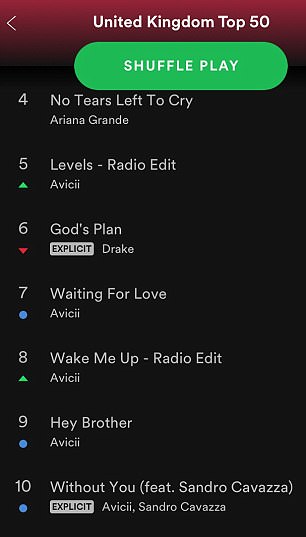 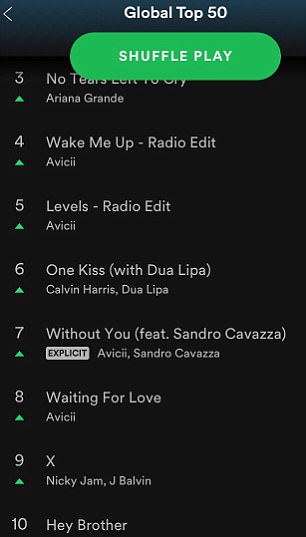 The electronic musician’s tracks have been dominating the music streaming site’s charts. Hits including Wake Me Up, Hey Brother and Levels have all been popular among listeners He nabbed double that number in Sweden’s top 50 list, boasting an astonishing nine songs in the top 10 positions.

Meanwhile hundreds of his fans gathered in Stockholm to remember his musical legacy.

Avicii was no stranger to Spotify success, with his hit Wake Me Up being the most played track of 2014.

In 2017, an average of 17.7 million users tuned into his tracks on the site every month.

The talented musician was reportedly close to finishing an album when he died.

Avicii was a pioneer of the contemporary Electronic Dance Movement and a rare DJ capable of worldwide arena tour.

He was part of the wave of DJ-producers, like David Guetta, Calvin Harris and Swedish House Mafia, who became lead performers in their own right.

The Swede earned $250,000 a night when playing out sold-out shows, according to GQ, and was once named as one of Forbes’ highest paid DJs.

Known for Wake Me Up! The Days, You Make Me, and the recent Lonely Together with Rita Ora, Avicii’s biggest hit was Levels.

His death came just days after he was nominated for a Billboard Music Award for top dance/electronic album for his EP Avicii (01), which he released last August. 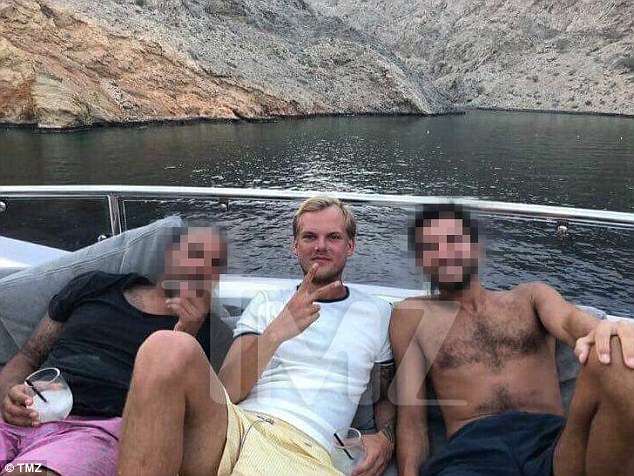 Avicii holding a drink in Muscat, Oman, just one day before he passed away. Authorities have said his death is not being treated as suspicious

Fans around the world noticed the heartbreaking final tweet from the legendary DJ, who wrote a few days ago: ‘Thanks for the nomination! @billboard #BBMAS’

Avicii struggled with addiction in the past and was hospitalised twice for alcohol-related issues.

He suffered from acute pancreatitis and had to have his gallbladder and appendix removed in 2014.

The DJ quit touring in 2016 in order to focus on his health and recovery.

In November 2017, footage was released of the musician hospital-ridden in Australia while struggling with his health during his worldwide arena tour.

Authorities in Oman have said his death is not being treated as suspicious.

Police have said his body will be flown to his native Sweden this week.

Avicii’s brother, David Bergling, had reportedly traveled to Muscat to find out more about his sibling’s death.

The musician was seen just days ago while posing with fans at the luxury Muscat Hills Resort – which are thought to be some of the last photos of him alive.

Fellow producer Calvin Harris was one of the first to tweet after his death, writing: ‘Devastating news about Avicii.

‘A beautiful soul, passionate and extremely talented with so much more to do. My heart goes out to his family. God bless you Tim.’

I Could Be The One

He scored his first UK number one in February 2013 alongside Dutch DJ Nicky Romero with I Could Be The One. The track, which features uncredited vocals from Swedish singer Noonie Bao, also topped the charts in Hungary and entered the top ten in Australia, Belgium, Denmark, Finland, Norway and Ireland.

Avicii had to fight his way into the mainstream. In 2011 X Factor winner Leona Lewis and her record label, Syco, had to settle a legal dispute with the DJ after he claimed they used an instrumental that was a direct copy of his own song, Fade Into Darkness. Collide was eventually released as a collaboration between Lewis and Avicii which skyrocketed his career and scored a number four in the charts.

Taken from his hugely successful debut album, True, Wake Me Up saw Avicii pick up his second number one in the UK charts. The track – featuring Aloe Blacc’s vocals – was the lead single for the album and became a 2013 summer anthem.

Also taken from True, Lay Me Down saw Avicii team up with Nile Rodgers and Adam Lambert. Rodgers lends his songwriting and guitar backing skills while Lambert – who performed the single during his own solo tour – is on vocals.

Again off True, Hey Brother was an instant commercial success. American bluegrass singer Dan Tyminski lends his vocals for the track which came from Avicii offering his brother advice. An official music video released in 2013 saw two brothers growing up in wartime America, with the older brother dying in the Vietnam war.