The cliché of a socially-awkward British tourist is nothing new.

But, according to research conducted by language app Babbel, the gaffes we commit in other countries aren’t just limited to socks with sandals or references to ‘the war’.

According to a study by their 100-strong team of linguists, the cliched phrases we’ve learnt through pop culture are now some of the biggest faux pas committed on foreign soil.

According to research conducted by language app Babbel, the gaffes we commit in other countries aren’t just limited to socks with sandals or references to ‘the war’. According to a study by their linguists, the cliched phrases we’ve learnt through pop culture are now some of the biggest faux pas committed on foreign soil

In addition, they found that  73 per cent of Brits feel they have missed out on something while travelling because they didn’t speak the local language.

Meanwhile, 96 per cent of respondents found that being able to speak a native language abroad meant locals were more welcoming.

But what are the biggest language gaffes? And why are they so offensive? Here’s the top phrases which we should all avoid when travelling through Europe. 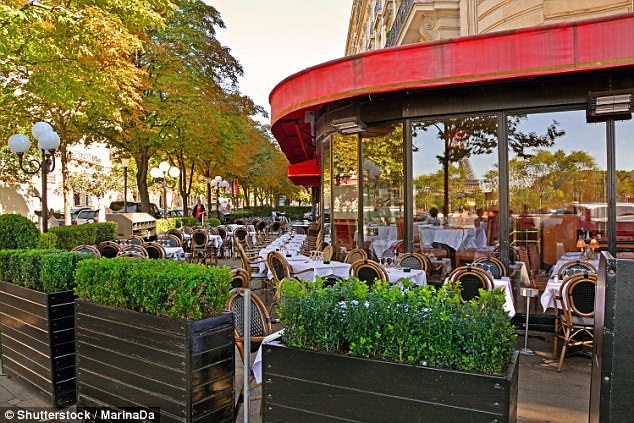 Bon Appetit literally invites diners to ‘a good digestion’, suggesting that they are so hungry that they are willing to jump at any food offered

It literally invites diners to ‘a good digestion’, suggesting that they are so hungry that they are willing to jump at any food offered.

In addition, conversation concerning body or bodily functions is deemed highly improper for the dinner table among the well-to-do, as is talking about and touching food, a belief originating in the 19th century.

This clichéd Italian exclamation literally means ‘my mother’ and was once used to express joy, fear or shock.

These days, it’s barely used by younger generations across Italy, especially in the big cities such as Rome or Milan.

In fact, the phrase is universally considered to be antiquated and is best used solely for referring to Abba-themed musicals.

This German word translates to you – but it’s a common etiquette trap for tourists.

See, there are two words for the pronoun depending on setting: ‘Sie’ is the formal version reserved for professional or legal settings, while du is the relaxed version.

Failure to understand this can be expensive – calling a government employee by ‘du’ can actually earn you a fine of upwards of €500.

Sometimes misinterpreted by British diners as the standard way to refer to a French waiter, the term ‘garçon’ actually means ‘boy’.

Thus, to be seen addressing a grown man with the term will make you appear patronising and snobbish.

Instead, try replacing it with a simple ‘monsieur’.

The literal translation of this popular German phrase is ‘how goes it’, but be careful how you use it.

Rather than a casual ‘what’s up’, this common expression will often result in a lengthy explanation of what’s going on in a person’s life. Not least because, in German culture, a detailed response is deemed mandatory.

If you’re asked the question, keep responses short and snappy: Sehr gut (very good), ganz gut (really good), es geht (so so) or nicht so gut (not so good).

You wouldn’t dream of wearing a beret, striped top and carrying a baguette in France, so why use these phrases?

Both ‘zut alors’ and ‘sacrebleu’ areare considered outdated, and generally only used in British tabloid headlines.

A native French person will find them bemusing, at best.

We’ve all seen The Terminator, but that doesn’t mean we should use it as a way to learn new languages. In this instance, Spanish.

For, while Arnold Schwarzenegger used it as a triumphant victory cry, it’s actually a cheery way of telling a Spanish-speaker you’re looking forward to seeing them again.

A better alternative is ‘hasta luego’, although a simple ‘adiós’ is usually sufficient.

Although connected with an expression of sexual innuendo here in Britain, this French phrase actually denotes negative surprise.

Specifically, it’s France’s equivalent of saying ‘Oh, crap’, thus try to avoid it if you embark on some foreign-soil flirting.

And, if you’re going to write it, ensure you include the accents over the a’s.

Yes, you may be able to say it off-by-heart, but that doesn’t mean you should.

The term ‘Voulez-vous coucher avec moi?’ – meaning ‘would you like to sleep with me tonight?’ – first appeared in A Streetcar Named Desire by Tennessee Williams.

It was then immortalised in the song Lady Marmalade – but it sounds very strange to the French ear and should be avoided at all costs.

Not least because it has connotations with prostitution.