Babies born by caesarean are almost three times more likely to suffer from metabolic disorders, like diabetes or obesity, according to a new landmark study.

The research, a collaborative effort between universities in Australia, the Netherlands, Ireland and UK, studied the health of woman and their children over a period of thirteen years.

They found babies delivered with any means of intervention, whether caesarean or by induction, were more likely to experience health problems, including respiratory, metabolic issues, or conditions like eczema.

Babies born by Caesarean 2.5 times more likely to suffer from like diabetes or obesity

WHY WOULD YOU NEED A CAESAREAN?

There are many reasons why your doctor may recommend that you have a caesarean section instead of giving birth vaginally.

If you had complications in a previous pregnancy or birth, or in your current pregnancy, you may be advised to have what’s called a planned or elective caesarean, or a planned repeat caesarean.

If you were planning to give birth vaginally, but complications during labour or birth mean that you’re advised to give birth by caesarean, you’ll have what’s called an unplanned or emergency caesarean.

Here are the reasons why you may have a planned or emergency caesarean, rather than a vaginal birth:

Results of the study

Women were selected for the study provided they were healthy, did not smoke or take drugs, were between 20-35, and gave birth between 37-41 weeks, to a single baby, of average weight.

They found that 88 per cent received some kind of pain medication during labour.

Almost half (43 per cent) of the women studied had their labour induced, while, 11 per cent had a caesarean section.

Nearly two-fifths (38 per cent) had a vaginal birth without intervention.

They found the induced infants were three times more likely to develop jaundice. They was also a chance they could develop problems feeding.

Children born by caesarean were more likely to develop hypothermia in the first 30 days following birth.

In the following years, they were two and half times more likely to develop metabolic disorders, like obesity and diabetes.

Generally, respiratory infections, metabolic disorder and eczema were all more common when there had been some form of intervention.

The study concludes: ‘Children born by spontaneous vaginal birth had fewer short‐ and longer‐term health problems, compared with those born after birth interventions.’ 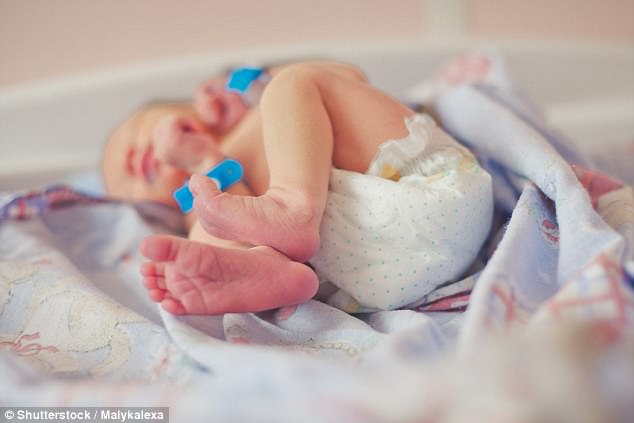 ‘Across the board, the results indicate that the odds of a child developing a short or longer term health problem significantly increase if there was a medical intervention at the time of their birth,’ professor Hannah Dahlen, from Western Sydney University’s School of Nursing and Midwifery and an author on the study, said.

‘The study adds to the mounting scientific evidence which suggests that children born by spontaneous vaginal birth, without commonly used medical and surgical intervention, have fewer health problems.’

Dr Lillian Peters, an epidemiologist at two Dutch universities and the Midwifery Academy Amsterdam Groningen added: ‘What we have done in this study – which is unique – is look at the use of hormones to start and stimulate labour as well as mode of birth.’

‘With our international team we will conduct future research to, hopefully, confirm or our findings by including other population-based data registries including a longer follow-up period for a wider range of adverse child health outcomes, particularly those that are found more commonly beyond 5 years of age.’

Professor Dahlen believes babies may be missing out on healthy bacteria they acquire during vaginal birth.

‘There is a general understanding that medical interventions may interrupt the normal stress of being born and seeding of a healthy microbiome and this can lead to a wide range of diverse health outcomes,’ she said.

‘Too little stress (i.e. no labour and caesarean section) and too much stress (induced/augmented labour and instrumental birth) can both have a negative impact.’

‘It is important that women and their partners have all the information about both short and long-term effects of intervention in order to make truly informed decisions about care,’ she says.