Controversial vaginal seeding may be a waste of time because babies get bacteria from their mother’s gut, a study has suggested.

In the largest study of its kind, researchers discovered very little vaginal bacteria in the guts of newborns delivered via natural birth.

The findings call into question the practice of swabbing babies born via Caesarean section with their mother’s vaginal bacteria.

The scientists also discovered babies born through a C-section face a greater risk of catching superbugs because they pick up more ‘unhealthy’ bacteria from hospitals – and get less of their mother’s gut bacteria.

Gynaecologists have today urged mothers-to-be to not be put off C-sections, which figures show are becoming more common.

They said the findings should not deter women from having the procedure as it can be life-saving and the chance of infection in the child is small.

The gut microbiome is a complex ecosystem of millions of microbes, and is thought to be important for the development of the immune system.

Lack of exposure to the right microbes in childhood has been linked to autoimmune diseases such as asthma, allergies and diabetes.

But it’s not known how important the initial gut microbiome is to the baby’s immune system development and health as it grows.

For years studies have suggested that vaginal bacteria were swallowed by the baby on its way down the birth canal.

Researchers at Tufts University in Boston suggest muscle strength in older adults may be higher due to mechanisms involving gut bacteria.

They looked at the gut microbiome composition in 18 adults aged 70-85 years, who were functioning at a high level, and had a healthy body build, with low fat and high lean fat.

The team compared them with 11 sedentary older adults of the same age group but with poor function and a less healthy body composition.

In the next step, fecal samples from the two groups were transplanted into the guts of young mice.

The body composition of mice was evaluated by an MRI.

The mice showed an increase in lean muscle mass and strength when the samples they received were from the high-functioning adults.

This suggested the link between muscle strength and the gut microbes.

The study was published online in the journal Experimental Gerontology.

Fears babies delivered via C-section were missing out on potentially vital microbes has fuelled a rise in popularity of vaginal seeding.

Faecal samples were taken from babies aged four, seven or 21 days old, who had been born in UK hospitals by vaginal delivery or Caesarean.

Using DNA sequencing, the researchers could see which bacteria were present and found there was a difference between the two delivery methods.

But they noted the differences in gut bacteria between vaginally born and Caesarean delivered babies largely evened out by the age of one.

Children born naturally had very few of their mother’s vaginal bacteria in their guts.

Babies born via C-section had much less of these bacteria and more bugs that are typically acquired in hospitals which were more likely to be antibiotic resistant.

This, the researchers warn, makes them more vulnerable to infections.

Researchers at the Wellcome Sanger Institute, UCL and University of Birmingham also warned the strains were more likely to be resistant to drugs.

They isolated and mapped out genomes of more than 800 of the bacteria, finding they could cause bloodstream infections. 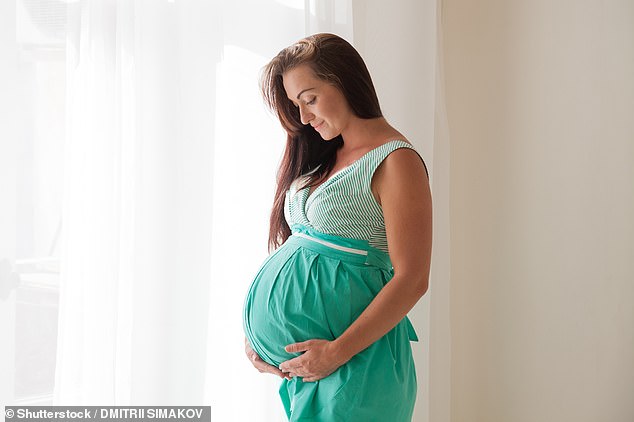 Around a quarter of mothers in the UK give birth by C-section. The procedure is usually used for medical reasons but women can also have one by choice (stock image)

Although these bacteria don’t usually cause disease while in the gut, they can cause infections if they get into the wrong place or if the immune system fails, according to the findings published in the journal Nature.

Dr Nigel Field, a senior author on the paper from UCL, added: ‘Our study showed that as the babies grow and take in bacteria when they feed and from everything around them, their gut microbiomes become more similar to each other.

WHAT IS THE GUT MADE OF?

Living inside of your gut are 300 to 500 different kinds of bacteria containing nearly 2 million genes.

Paired with other tiny organisms like viruses and fungi, they make what’s known as the microbiota, or the microbiome.

Like a fingerprint, each person’s microbiota is unique: The mix of bacteria in your body is different from everyone else’s mix.

It’s determined partly by your mother’s microbiota – the environment that you’re exposed to at birth – and partly from your diet and lifestyle.

The bacteria live throughout your body, but the ones in your gut may have the biggest impact on your well-being.

They line your entire digestive system. Most live in your intestines and colon.

There is evidence it affects everything from your metabolism to your mood to your immune system.

‘After they have been weaned, the microbiome differences between babies born via Caesarean and delivered vaginally have mainly evened out.

‘We don’t yet know whether the initial differences we found will have any health implications.’

Dr Trevor Lawley, a senior author on the paper from the Wellcome Sanger Institute, said: ‘This is the largest genomic investigation of newborn babies’ microbiomes to date.

‘We discovered the mode of delivery had a great impact on the gut bacteria of newborn babies, with transmission of bacteria from mother to baby occurring during vaginal birth.

‘Further understanding of which species of bacteria help create a healthy baby microbiome could enable us to create bacterial therapies.’

Dr Alison Wright, vice president of The Royal College of Obstetricians and Gynaecologists, said mothers should not be put off C-sections by the findings.

She said: ‘In many cases, a Caesarean is a life-saving procedure, and can be the right choice for a woman and her baby.

‘The exact role of the microbiome in the newborn and what factors can change it are still uncertain, so we don’t think this study should deter women from having a Caesarean.

‘This study shows that more research is required to improve our understanding of this important area.’

The number of Caesareans carried out in the UK has risen from 12 per cent in 2000 to more than 26 per cent today.

Women having babies later in life and fear of labour are contributing to the increase which means more than a quarter of babies are now born this way.

In place of some of the mother’s bacteria, the babies born via Caesarean had more bacteria that are typically acquired in hospital.