Baby born with heart outside her body comes home

She’s our Christmas miracle! Baby born with heart outside her body comes home after undergoing several unique surgeries to save her life

By Ross Slater For The Mail On Sunday

A year ago, Naomi Findlay and Dean Wilkins were in hospital praying that their daughter – the first baby in Britain to ever survive being born with its heart outside the body – would live.

Twelve months on, they will enjoy a particularly joyous Christmas at their Nottingham home with brave Vanellope.

She weighed just 3 lb 8oz when she was delivered at Glenfield Hospital in Leicester on November 22 last year, where a 50-strong team was on hand to conduct the difficult and unique surgery.

Doctors told her parents, who had earlier watched scans of their unborn child playing with her own heart in the womb, to expect the worst.

Her heart was covered by protective plastic and her chest opened to make room for the organ, which naturally sank into her body over two weeks. 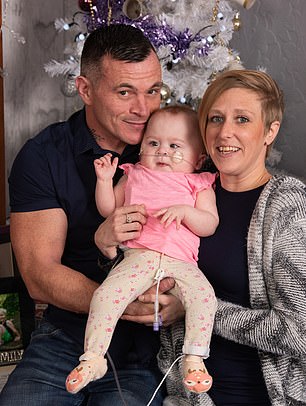 Then a protective mesh shield was installed over the heart and the cavity covered with a skin graft.

‘At times this year her life was hanging by a thread, but she survived and she now has her own page in the medical encyclopaedias,’ said Naomi.

‘That’s how special she is.’

Vanellope still needs oxygen and has to take a cocktail of drugs, but weighs 18 lb and was last week healthy enough to watch her elder brother in his school Nativity play.

‘That was a miracle in itself,’ said Naomi. ‘Having her at home with us is the only present we need.’

The family are hoping for more good news in the New Year.

Vanellope – named after a feisty character in the Disney film Wreck-It Ralph – currently spends four nights at home and three in hospital, but the plan is to have her at home permanently soon.