Baby born with her heart growing OUTSIDE of her chest

She was the size of a grape in the womb when doctors diagnosed a rare condition and put her chances of survival at ‘next to zero’.

But baby Vanellope Hope – whose beating heart grew on the outside of her body – has defied eight-in-a-million odds and is three weeks’ old.

It took an incredible team of 50 doctors, midwives and nurses to safely deliver her in an operation rarely successfully performed in Britain.

And her joyful parents – who had dismissed early advice to terminate the pregnancy – showed off the miracle daughter they never thought they would have.

Vanellope is recovering from three extraordinary operations to relocate her heart from outside her chest to inside her body.

Her condition, ectopia cordis, was discovered during a scan at nine weeks into pregnancy.

Expectant mother Naomi Findlay, 31, recalled: ‘I burst into tears. The condition came with so many problems.’

Her partner Dean Wilkins said: ‘We were told our best bet was to terminate and my whole world just fell to bits.’

Miss Findlay added: ‘All the way through it, it was ‘the chances of survival are next to none, the only option is to terminate, we can offer counselling’, and things like that.

‘In the end, I just said that termination is not an option for me. If [death] was to happen naturally, then so be it.’

The parents were warned their baby might have chromosomal abnormalities, potential damage to her heart and circulation, and was unlikely to even survive until birth.

But hope began to return when Frances Bu’Lock, consultant paediatric cardiologist at Glenfield Hospital, Leicester, conducted further scans at 13 and 16 weeks and discovered that – apart from her heart being in the wrong place – Vanellope ‘appeared essentially normal’.

Undeterred in their fight for their baby, The couple, from Nottingham, paid for a special blood test to check for chromosomal problems.

Mr Wilkins said: ‘When the results of that test came back as low risk of any abnormalities, we jumped up and down in the living room and cried. At that point we decided to fight to give our daughter the best chance of surviving.’ 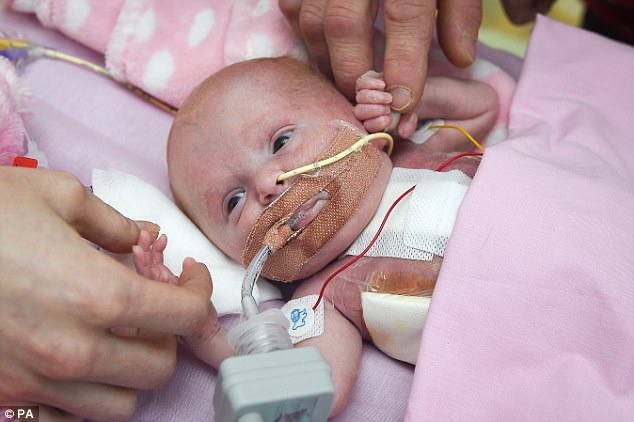 The condition, ectopia cordis, was discovered during a scan after nine weeks’ pregnancy

Dr Bu’Lock said: ‘We came together as a team of fetal medicine doctors, obstetricians, anaesthetists, cardiac and abdominal surgeons and cardiologists to review all of the available information and discuss how best to plan for a delivery, surgery and subsequent care.

‘It was decided that delivery by caesarean section would be best to reduce the risks of infection, risks of trauma or squashing of the heart during delivery, and that surgery to provide some sort of covering to the heart would be needed immediately after baby was delivered.’

When she was 35½ weeks’ pregnant, at 9am on November 22, Miss Findlay was wheeled into a cardiac theatre at Glenfield Hospital.

She met the 50 doctors, midwives and nurses who were split into four teams to deliver the baby, keep the mother safe and carry out the complex heart surgery. 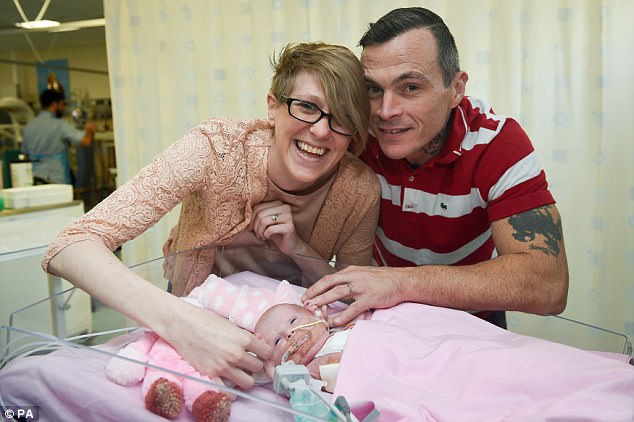 Her parents, Naomi Findlay and Dean Wilkins, of Bulwell, Nottinghamshire, said the first scans led doctors to tell them that ‘termination’ was the only option 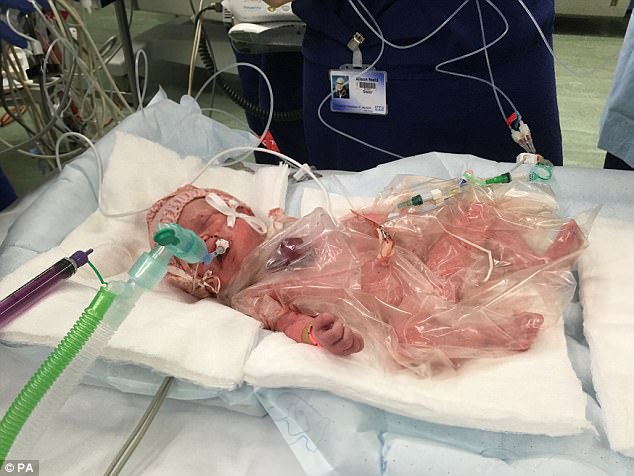 Frances Bu’Lock, the consultant paediatric cardiologist at Glenfield Hospital, Leicester, said she described the chances of the baby surviving as ‘remote’

At 9:50am, baby Vanellope was born. Miss Findlay recalled: ‘I started to panic. I actually felt physically sick, because I thought there was a big possibility I wouldn’t be able to see her, or hear her, or anything really.

Mr Wilkins said: ‘When she cried, we cried. I felt hopeless and just held onto Naomi and was staring into her eyes praying that it was all going to be ok.’

Vanellope – and her exposed beating red heart – was immediately wrapped in a sterile plastic bag and was whisked to the next team in an adjoining theatre. Her head was kept outside the bag, with a woolly hat to keep warm.

Consultant Neonatologist Jonathan Cusack said: ‘The bag keeps the organs sterile but also keeps the tissues moist. We inserted a breathing tube into her mouth and gave medications to sedate her and stop her moving.

‘Vanellope was born in good condition. She cried at birth and coped well with the early stabilisation and her heart continued to beat effectively.’

Around 50 minutes after birth, Vanellope was stable enough to be transferred back to the main theatre – where surgical teams began the task of putting her entire heart back inside her chest.

They carefully stretched apart a tuppence-sized chest hole to create more space for the heart, and installed a protective membrane over the beating organ.

Over the next nine days, lying on her back in intensive care, Vanellope’s heart gradually sank into the hole in her chest. 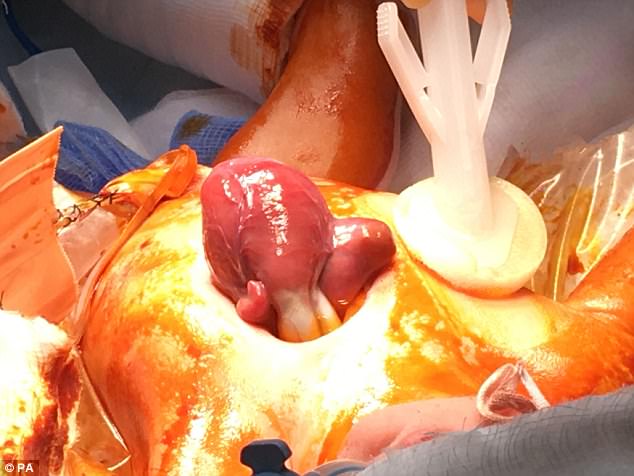 And experts, including the consultant cardiologist, have said that they do not know of a case in the UK where a baby has survived such a condition 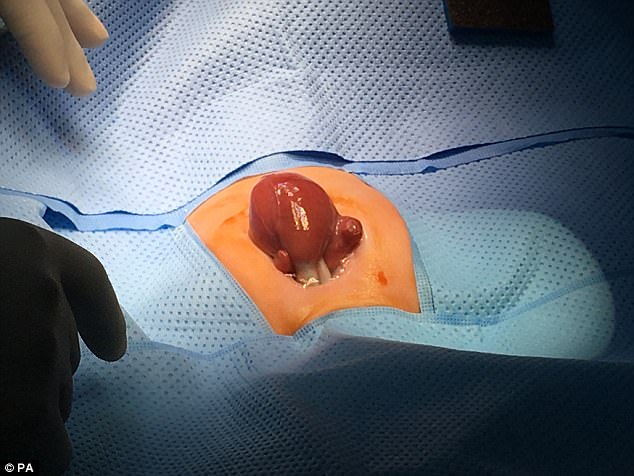 Speaking of when she first found out about her daughter’s rare condition, mother-of-two Naomi explained that she ‘burst into tears’ 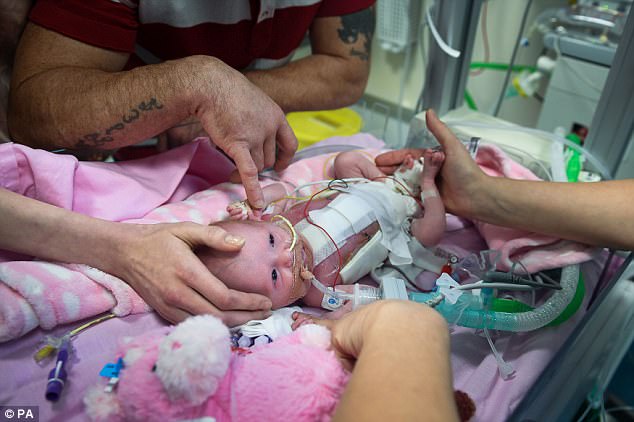 The couple revealed the baby was named after a character in the Disney film, Wreck It Ralph

Surgeons replaced the temporary membrane with a permanent one, and created a special mesh to join loose ribs together and form a cage within her chest.

Finally, they made cuts in her skin and stretched it to cover over the hole.

As her organs fight for space inside her chest, Vanellope is still attached to a ventilation machine but her chances of long-term survival are improving by the day.

WHAT IS ECTOPIA CORDIS?

Pentalogy of Cantrell is a rare disorder that is present at birth.

It is characterized by a combination of birth defects that can involve the breastbone, the sternum, the diaphragm, the thin membrane that lines the heart, the abdominal wall, and the heart.

Pentalogy of Cantrell occurs with varying degrees of severity. Some infants may have mild defects, while others may have serious, life-threatening complications.

The most severe expression of Pentalogy of Cantrell occurs when the heart is completely or partially displaced outside the chest, which is known as ectopia cordis.

Infants with Pentalogy of Cantrell can have a wide variety of congenital heart defects including a ‘hole in the heart’ and abnormal location of the heart on the right side of chest instead of the left, among others.

The exact cause of Pentalogy of Cantrell is unknown. Most cases occur randomly for no apparent reason.

One theory suggests that the symptoms of Pentalogy of Cantrell occur due to an abnormality in the development of embryonic tissue early in the pregnancy.

The condition affects boys and girls in equal numbers. The exact prevalence is unknown, but estimated to be 5.5 in one million live births.

Dr Moore said: ‘She has a long way to go but so far at least she now has a chance at a future.’

Vanellope has already beaten odds of eight-in-one-million to have the condition and survive until birth.

The medical procedure is extremely rare because most mothers faced with a diagnoses of ectopia cordis have an abortion.

No records exist as to how many times the operation has been done before, but it is believed to be one of the first to have taken place in Britain.

Mr Wilkins, a builder, said: ‘The moment she was born, I realised that we had made the right decision.

‘We know this is going to be a rollercoaster and have started to prepare ourselves for the difficult times ahead, but we needed to give her a chance, and the team here have done that. I can’t begin to thank them for what they have done for my girls.’

Full-time mother Miss Findlay added: ‘I’m glad I stuck to my guns not to terminate.

‘I genuinely didn’t think my baby would survive, but the staff at Glenfield have been amazing. Now, looking at her, I just want to pick her up and hold her close and I wouldn’t want to put her down.’

Mr Wilkins, who has two other children from a previous relationship, and Miss Findlay, who has a six-year-old son, said Vanellope was named after a character in the Disney film Wreck It Ralph.

Miss Findlay said: ‘Vanellope in the film is so stubborn and she turns into a princess at the end so it was so fitting.’

She added: ‘I had prepared myself for the worst – that was my way of dealing with it. I had brought an outfit to hospital that she could wear if she died.

‘I’m now confident she won’t wear it, so I’m going to donate it to the hospital.

‘I genuinely didn’t think my baby would survive, but the staff at Glenfield have been amazing.

‘They’ve supported us, explained everything that might happen and involved us in the plans to keep my baby safe. I can’t put in words how grateful I am for everything they have done. They are amazing.’ 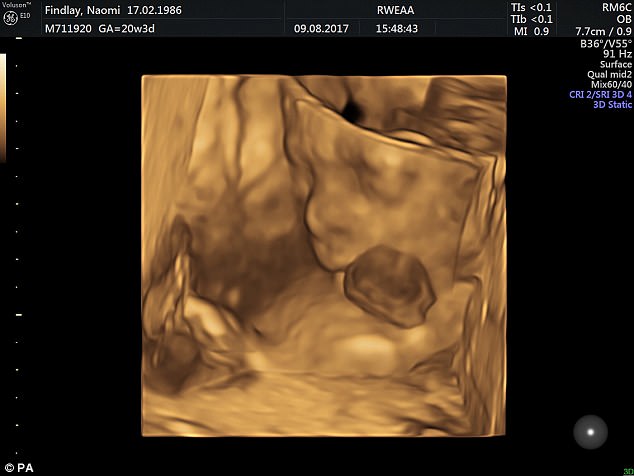 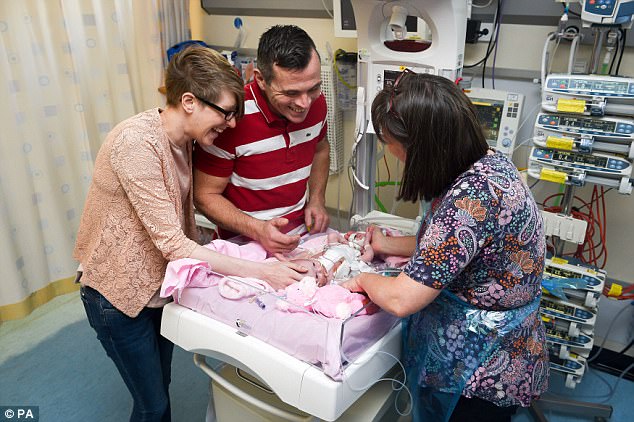 Dean, who works as a builder, said: ‘We still didn’t know what we were looking at when we saw the scan, it looked like a little hamster with a hat on’