Baby bust: Coronavirus lockdown is putting people OFF having children

Lockdown is putting people OFF having children rather than leading to predicted baby boom, study suggests

People hoping to have babies are delaying their dreams of parenthood because of the ongoing uncertainty surrounding the coronavirus pandemic.

A survey found more than a third of people (37 per cent) who had been hoping for a child soon have put these plans on hold due to the pandemic.

Research led by the University of Florence also found over 80 per cent of all people surveyed — including those that were and were not considering having children — do not plan to conceive during the COVID-19 crisis.

Experts had previously predicted a lockdown-induced baby boom due to the extended periods of time alone with a partner and little else to do to fill the time.

The study revealed changing approaches to parenthood due to the pandemic, but it also found it has not stopped co-habiting lovers engaging in intimacy.

Participants reported no drop in libido as the frequency of trysts during lockdown remained the same as before the outbreak of COVID-19.

Almost 60 percent cited worries over economic difficulties and any potential consequences on pregnancy due to the disease.

Lead author Dr Elisabetta Micelli, an expert in IVF, says mental wellbeing is affecting the desire to have a baby.

She explained: ‘The impact of the quarantine on general population’s perception of their stability and peacefulness is alarming.

‘In our study sample, the majority of participants gave significantly higher total scores to their mental wellbeing before the pandemic, while lowest scores were reported in the answers referred to the COVID-19 period.

‘We aimed to evaluate if pandemic-related concerns and worries are affecting the desire for parenthood in couples who were already planning to have a child or if quarantine is encouraging reproductive desire.

‘What we found were the main reasons that led people to not wanting to conceive included worries related to future economic difficulties and consequences on pregnancy.’

Out of 1,482 participants interviewed online 1,214, or 82 per cent, did not intend to conceive during the pandemic crisis.

The shock findings were based on 944 women and 538 men aged between 18 and 46 who had been in a stable heterosexual relationship for at least a year. 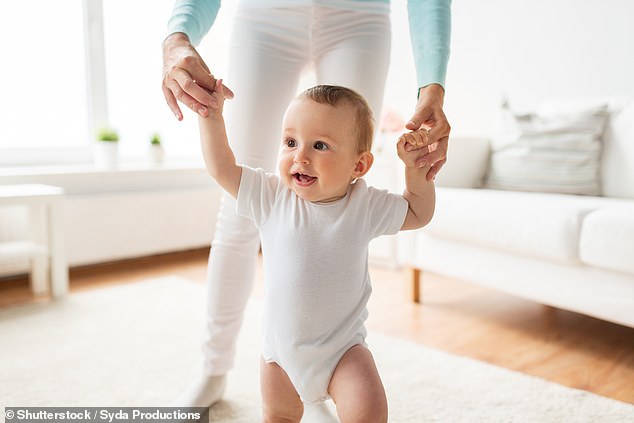 Vogue survey finds US couples are having less sex in quarantine

Couples have admitted that they’re actually having less sex amid the coronavirus pandemic despite having ample time to be physically intimate while quarantined at home.

When Vogue asked people to open up about their sex lives during the global crisis, many of the interviewees shared that their libidos have dropped thanks to mounting anxiety over the novel virus and plummeting economy.

‘I thought my husband and I were going to have a ton of sex with all the time we were spending together and being un- and underemployed, but we’ve probably had sex twice since this all started,’ Nicky, 38, told the publication.

The creative director, who is in her fifth year of marriage, added that they’re ‘definitely staying close and cuddling,’ but there is ‘not a lot of action.’

Nicholas, a 27-year-old publicist, said he and his boyfriend of five years have been drinking more alcohol, but that hasn’t translated into more sex.

It was carried out in the third week of the lockdown in Italy, reports the Journal of Psychosomatic Obstetrics and Gynecology.

The researchers say some people may be worried that waiting for a more ideal time to have children could eat into an already diminishing fertility window.

They hypothesise that many people deem that too big a risk to take and the fear of infertility outweighs the worries of the consequences of COVID-19.

While those  seriously contemplating childhood may be put off by the coronavirus pandemic, 140 (11.5 per cent) of the study participants revealed the extra thinking time had sparked a new desire for parenthood.

Specifically, the wish was mainly expressed by women. However, only six out of the 140 tried to get pregnant in this period.

Dr Micelli said: ‘Interestingly, although almost half of the people referred to no interruption in their job activity and no variations of salaries, probably due to the “smart working” adapting strategy, over 40 per cent reported a worrying reduction of monthly profits.

‘Remarkably, the fear of imminent and future economic instabilities led those who were searching for a pregnancy to stop their intention in 58 per cent of cases.’

Added co-author Dr Gianmartin Cito: ‘Again, fear of consequences on pregnancy in addition to the economic impact on families are probably the reasons why almost the whole group of couples who unexpectedly started to express a desire for parenthood during quarantine did not translate this dream into a concrete attempt.’

But there was little change in levels of sexual activity. No reduction was reported among two thirds of those who had not been planning to become parents.

Six in ten couples who were already involved in childbearing attempts continued – and did not report less sexual intercourse.