Wake up mom! The heartbreaking moment a baby elephant tries to wake up its mother which collapsed and died after wandering into village

This is heart-wrenching moment a baby elephant is seen trying to wake up its mother which collapsed and died after wandering into a village in India.

The calf used its trunk to stroke its mother’s head as she lay motionless on the ground in Hiran village, in the eastern Indian state of Odisha.

The ailing mother elephant with its baby in tow had strayed into the community which lies near the Khalasuni jungle in the Deogarh district. 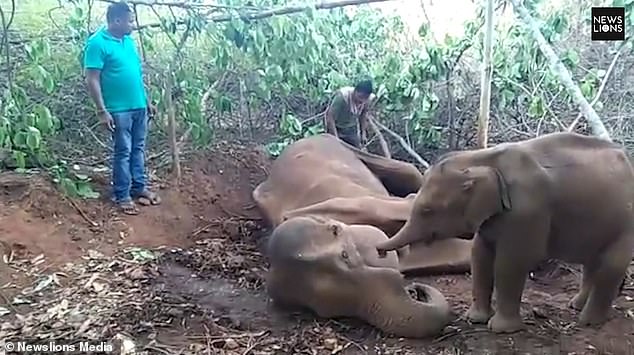 Initially, the villagers took care of the elephant and its calf, providing them with food, water and applying herbal medicine on the wounds on her right leg and forehead.

They informed the forest rangers about the presence of the female and its calf in their village.

According to the villagers, the elephant had apparently broken its right leg, likely from falling into a pit. She also had a wound on her forehead.

For the first few days, the limping elephant was somehow able to move around on its own.

But as the wound worsened, she collapsed on the ground and was unable to stand on her feet again. 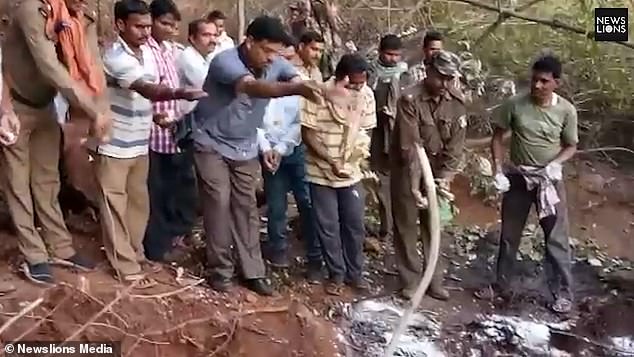 The villagers (pictured) and veterinary doctors were unable to save the mother elephant, who sustained a broken leg after she fell into a ditch

Over the last six weeks, the elephant underwent treatment in the village from vet veterinary doctors assigned by forest rangers.

But although they tried their best to cure the elephant, they were unable to save the mother’s life.

The baby elephant, unaware of the fact that its mother had died, could be seen innocently trying to wake her up.