Not many of us could resist the cuteness of these five puppies.

The litter of three-month-old Labradors, set to be future seeing eye dogs, were introduced to the public by its breeder, the Chinese Guide Dog Southern Demonstration Centre, on September 16.

The centre announced during their public debut that it is looking for five foster families for the adorable puppies. 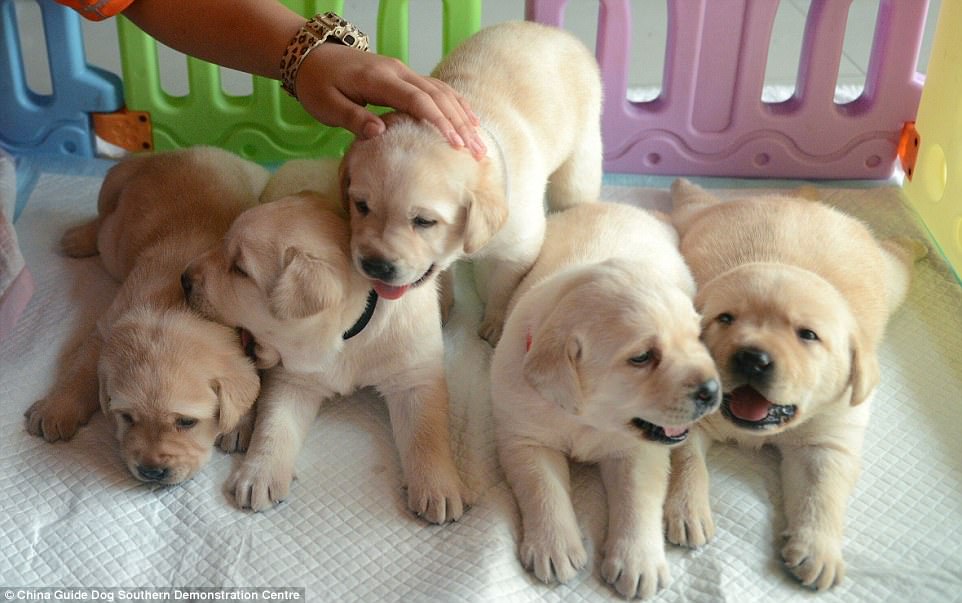 Too cute: At three months old, the five fluffy puppies made their public debut on September 16 at the training centre 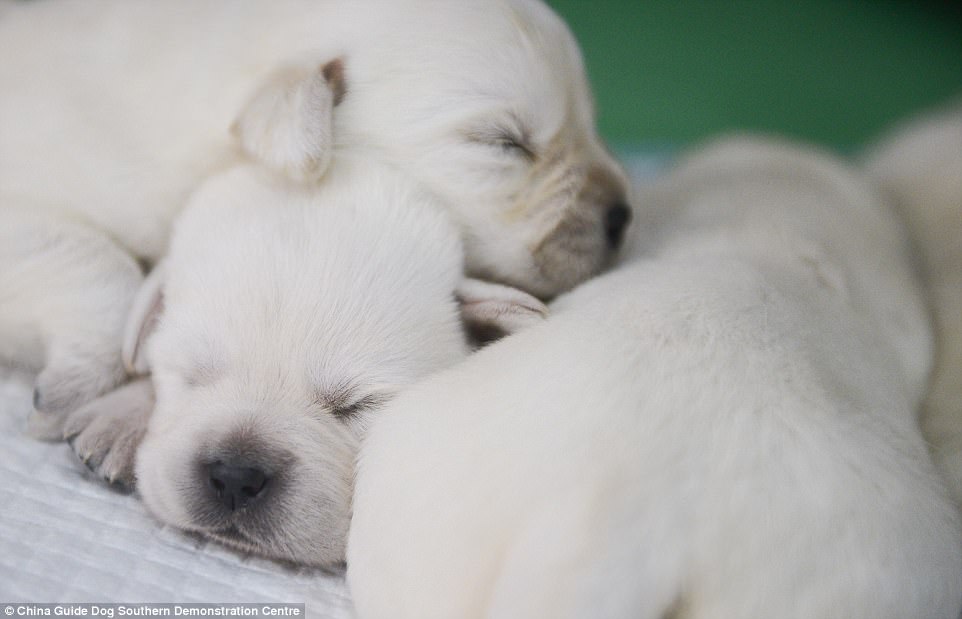 Man’s best friends: They will be trained as seeing eye dogs and the centre is seeking families to raise them until one year old

A spokesperson told MailOnline that the centre, based in Guangdong Province, wants the future guide dogs to grow up in ‘an ordinary environment’. Therefore, the centre wants to find ‘responsible’ and ‘caring’ people to look after them.

The families would be able to raise them until they are around one year old. After that the dogs would start their training at the centre.

The spokesperson said the centre is seeking families which have stable residence, income and support the idea of guide dogs in nearby Guangzhou and Foshan.

The desirable families are required to have at least one male member and one female member, and can provide attentive care to the dogs. The dogs should not be left alone at home for more than four hours on any occasion. 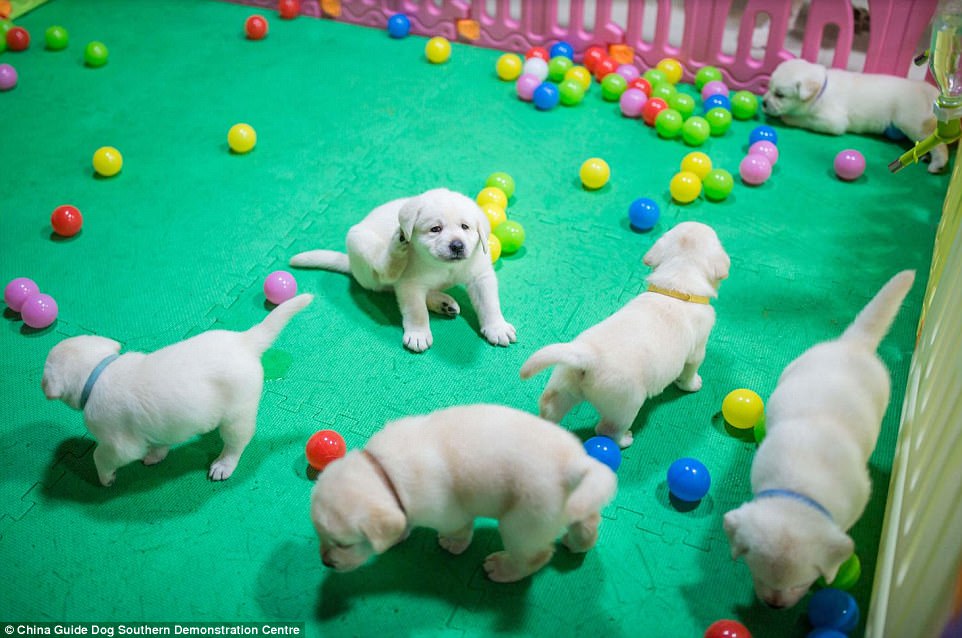 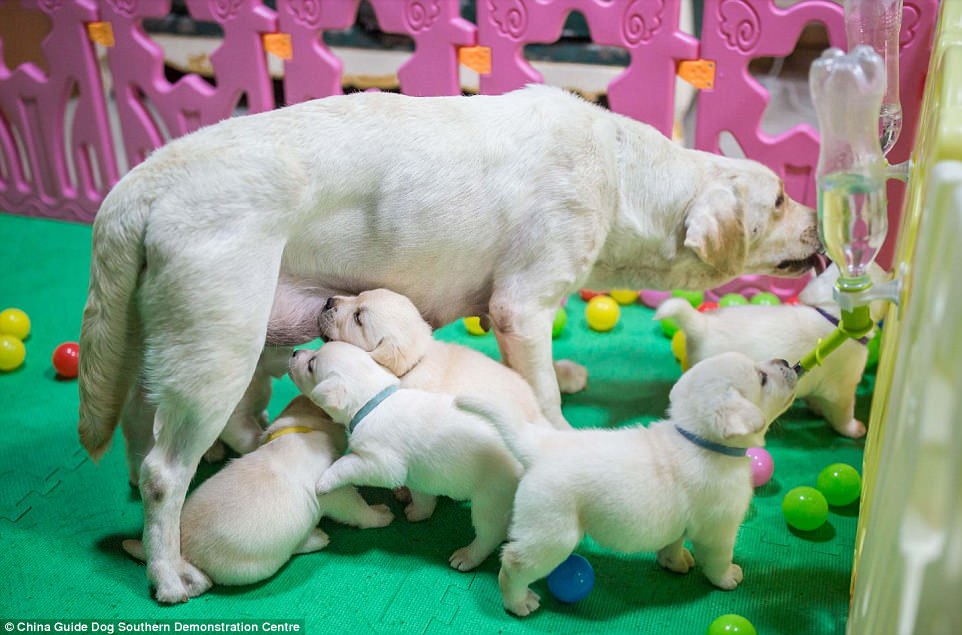 Love and care: A total of 11 Labrador puppies have been born at the centre since its establishment in June last year 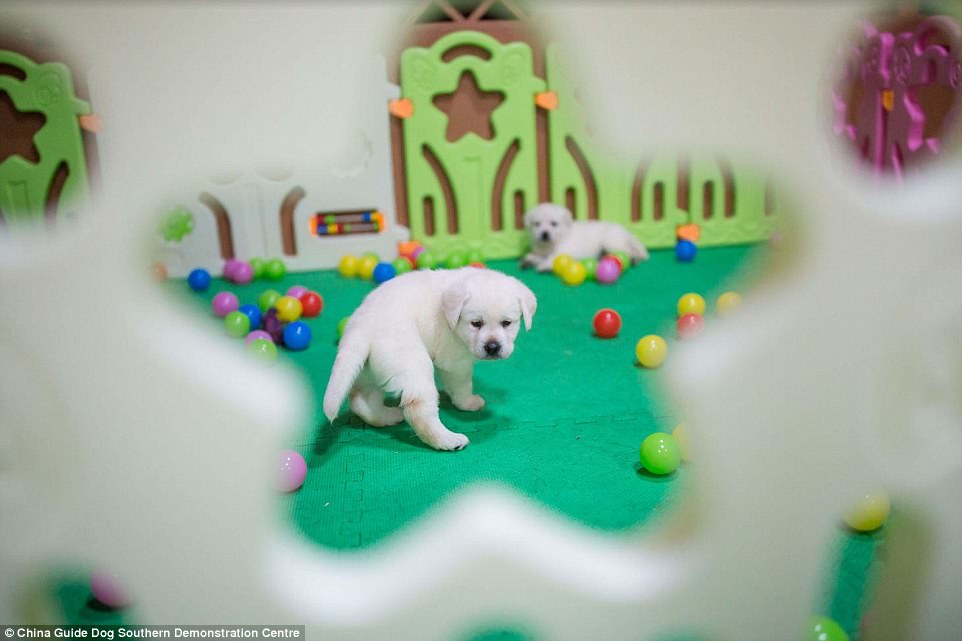 Can I go home with you? A puppy is playing at the Chinese Guide Dog Southern Demonstration Centre in Guangdong

They should teach the puppies how to interact with humans.

They should also take the dogs out regularly so the animals could grow up feeling comfortable in various surroundings such as parks, subway stations and shops. 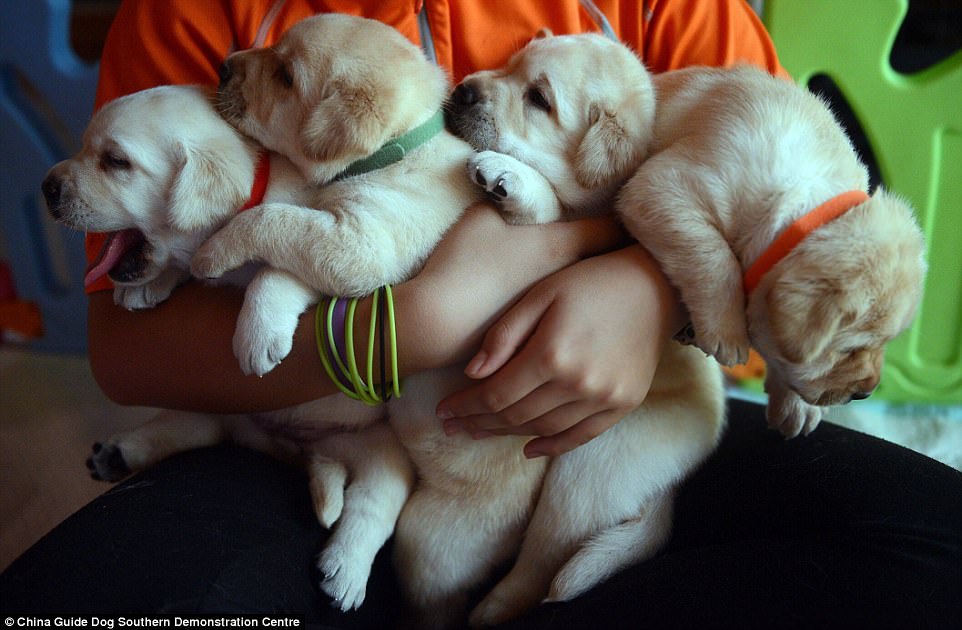 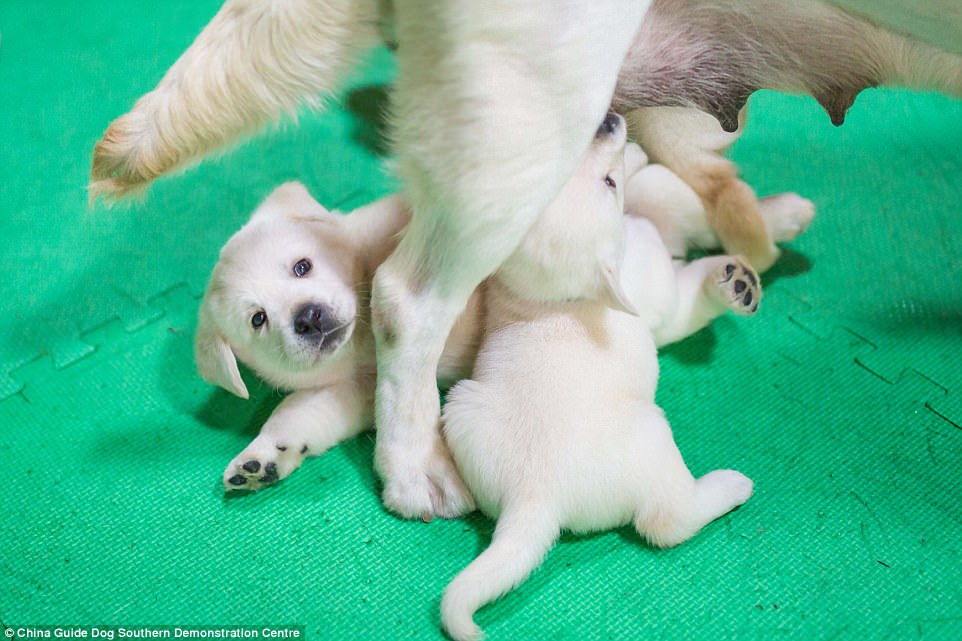 Playful: The desirable families should be ‘responsible’ and ‘caring’ and need to provide attentive care to the puppies 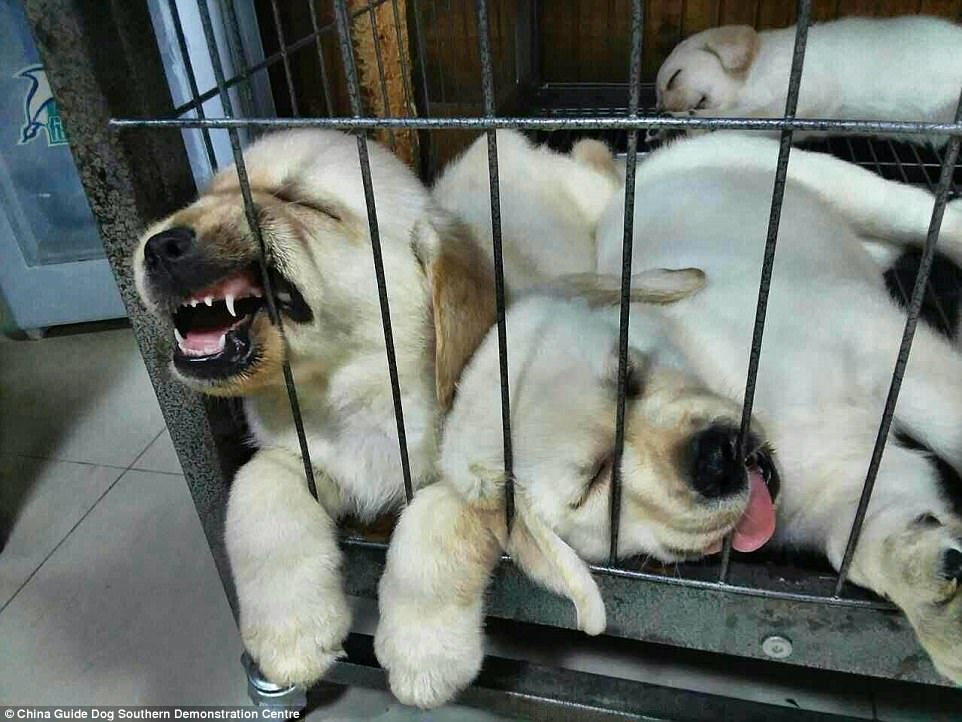 Too tired: The dogs fall asleep in their cage after a day of hard play at the Chinese Guide Dog Southern Demonstration Centre 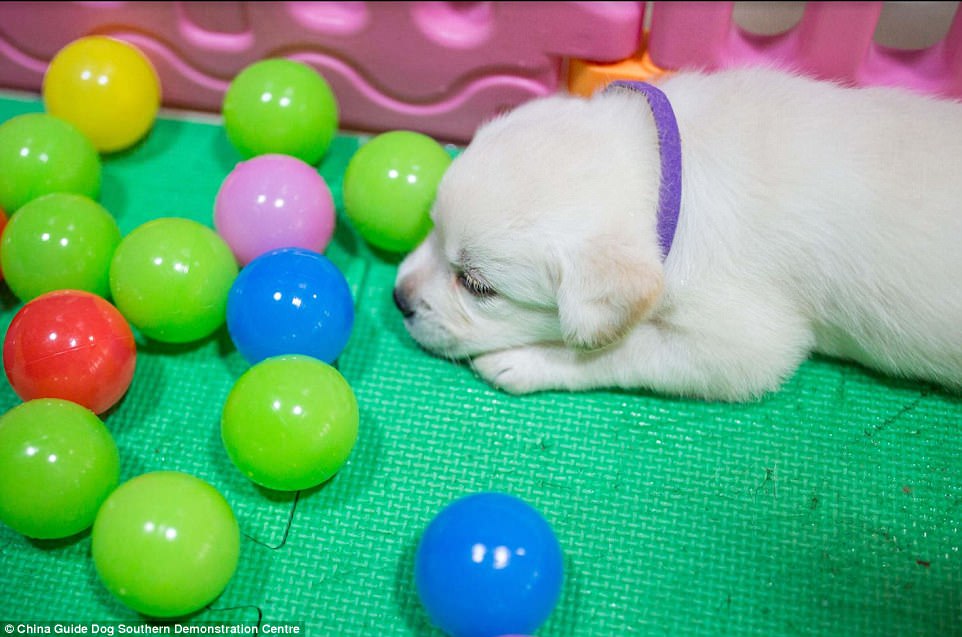 Thoughtful: The centre hoped the carers could teach the puppies how to interact with humans in a natural environment

Last month, a U.S.-based research revealed that puppies could grow to be better guide dogs when their mothers give them ‘tough’ love.

The study suggested that doting dog mothers – much like human helicopter parents who protect their children from adversity – seem to handicap their puppies.

When researchers tracked puppies in a guide dog school a couple of years after they were born, they found that those with mothers that were more attentive were less likely to graduate from the training program – in particular, dogs whose mothers nursed more often lying down, as opposed to sitting or standing up, were less likely to succeed.