Bachelor Matt Lauer grabs pizza and a bag of chips

Matt Lauer dined out on Monday afternoon, with the disgraced Today anchor photographed in Sag Harbor while grabbing a pizza and bag of chips for lunch.

The former Today host was seen heading into Harbor Market and Kitchen, a local take-out shop that is just a few miles away from each of his three massive Hamptons properties.

He was also seen a few hours earlier at one of those Hamptons properties, the 40-acre equestrian facility Bright Side Farm.

Lauer, 60, was outfitted in his standard off-duty uniform of jeans, a down coat, suede boats and a wool cap as he made his way in to the stables at the farm around 11 am, where he was joined by his estranged wife Annette.

The two were photographed entering the facility at separate times, and Lauer headed off on his pizza run after a little over an hour at the facility, with Annette staying behind.

Lauer was also not wearing his wedding ring, which has now been off for close to two months.

Bachelor in pizza-dise: Matt Lauer was photographed grabbing pizza and a bag of chips for lunch on Monday in Sag Harbor (above) 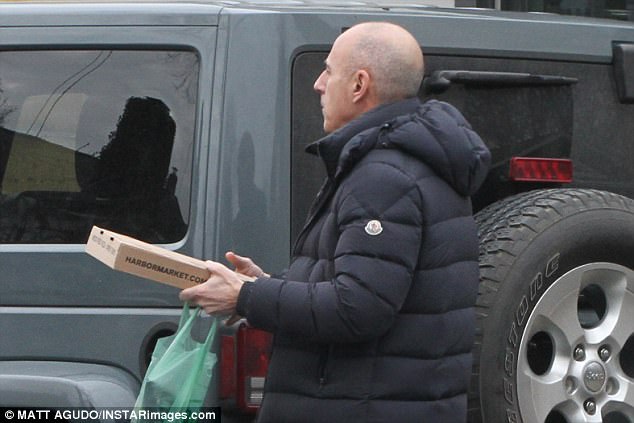 Free bird: The disgraced Today anchor, 60, was not wearing his wedding ring (above) amidst reports his wife had kicked them out of their Hamptons home

Carbs: Lauer got a bag of Stacy’s ‘Simply Naked’ plain flavored pita chips to go with his pizza 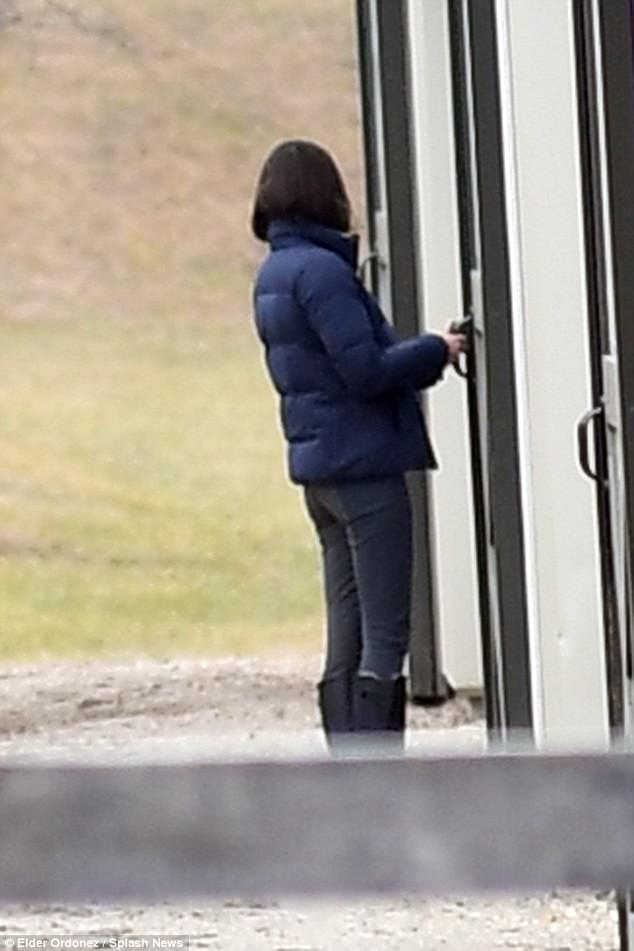 Shroud of secrecy: A source close to Lauer disputed this, saying the couple haven’t been together or lived under the same roof for many years (Annette above on Monday) 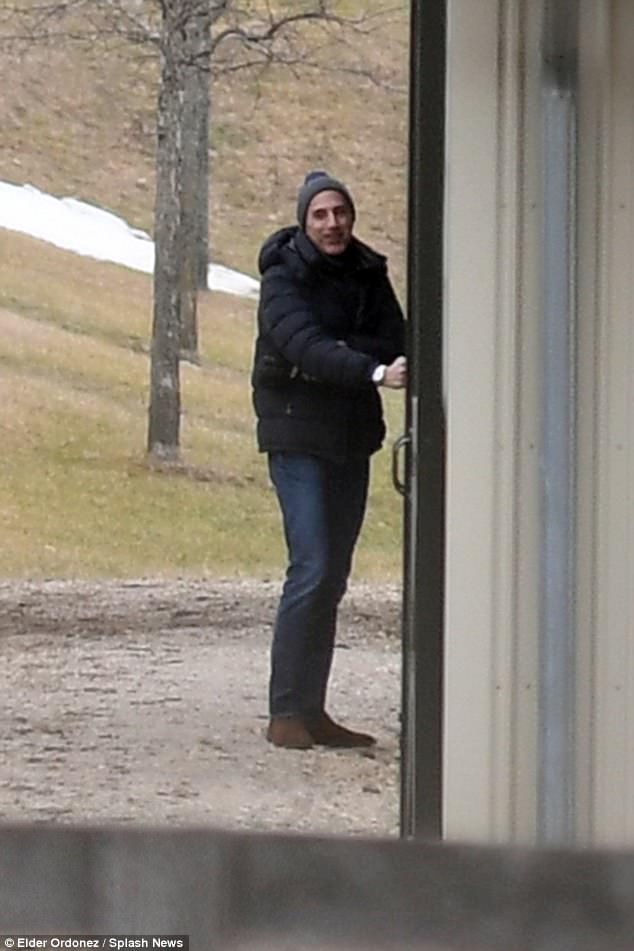 Smile through the pain: Annette and her estranged husband did spend Monday morning together at their equestrian facility, Bright Side Farm (Lauer above on Monday)

Talk has now turned to when Annette might file for divorce and how much she stands to make in the split.

There had been a report that she kicked Lauer out of their Hamptons home over the weekend, but sources tell DailyMail.com that is not entirely true.

One person who is close to Lauer said that even though he and Annette have been technically ‘married’ for almost 20 years, they haven’t been together or lived under the same roof for many years.

It seems that Lauer is staying at the family’s $ 18million compound in Sag Harbor while Annette is with their two youngest children at their $36 million North Haven estate. The couple’s oldest son is away at boarding school.

Lauer had been seen entering and exiting the North have compound as well, but that was when his wife was in Europe as the NBC scandal broke.

He has been spotted with Annette though a handful times at the horse facility, where their daughter Romy rides and trains the family’s horses on a near-daily basis.

Lauer revealed in a 2013 interview with Parenting that he wished he could spent more time with his children – Jack, 16, Romy, 14 and Thijs, 11.

‘We made a decision a couple of years ago to move out of the city. Way out. So my home is in the Hamptons and that’s where our kids go to school. As a result, I’m in the city three or four nights a week, and I’m home on weekends,’ explained Lauer.

‘I go for school events–I do get out there for those. Because of this decision we made – and wanted to make for them – my time is consolidated into three intense days. The time is more precious and the time you spend is more significant.’ 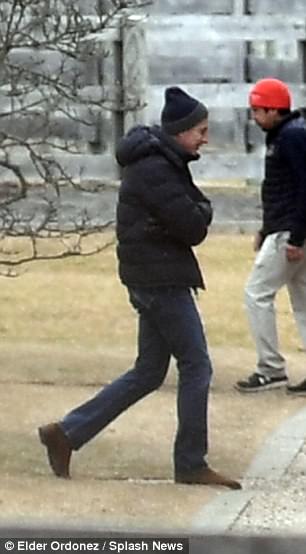 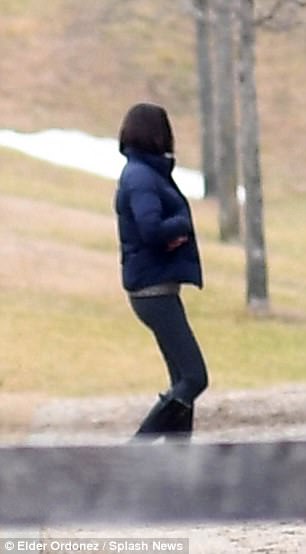 So much land: Lauer owns three properties in the Hamptons: two massive estates and the equestrian facility 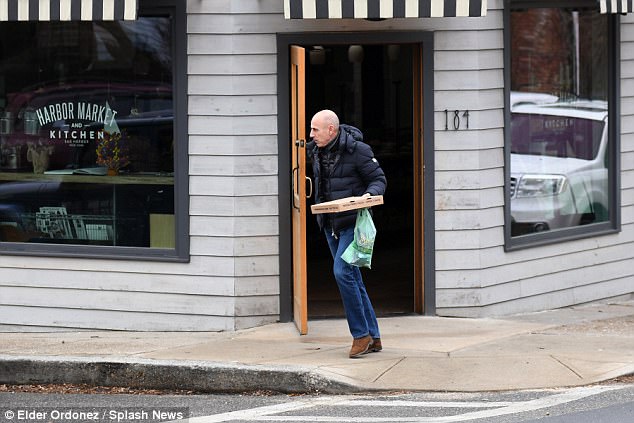 Meal for one: It is believed he is staying in the family’s $15 million Sag Harbor home while his wife and two youngest children as in their $36 million North Haven estate

That New York City apartment meanwhile is the one location Lauer has not been spotted at in recent weeks.

Lauer purchased that apartment in 2004 for $5.9 million, and the deed is in just his name .

He had been looking to sell his 8,000-square-foot home in Sag Harbor after purchasing the North Haven compound, but a buyer never materialized despite a $2 million price reduction.

Lauer now appears to be living at that 25-acre property while his wife and two youngest are just a few miles away.

Bright Side was picked up by the couple back in 2012 for $3.5 million, and then opened two years later after massive renovations to the grounds and facility.

It was reported last month that Annette had been seen entering the law firm Latham & Watkins in Manhattan.

She is reportedly looking to end her marriage with Matt after 20 years in the wake of recent sexual misconduct allegations.

Meanwhile, in the eight weeks since those allegations of misconduct cost Lauer his $25 million-a-year job at NBC as host of Today, the show is doing better than ever in the ratings.

It sis expected that Annette will be looking to get more money if she files for divorce from Lauer, something she previously did in 2006 before withdrawing her complaint.

‘The post-nup will likely specify how much Annette would get if they divorce, but she is expected to challenge it given Matt’s earnings since 2006, and given how he has humiliated her,’ a source told Page Six.