Backseat driving!  Are you ready for the autonomous vehicle revolution

Now here’s a tantalising prospect. You’re relaxing in the car — reading, listening eyes-closed to the radio, or sitting with your back to the road and chatting to other passengers.

Your autonomous car does all the work. It checks the road ahead, keeps a safe distance from other vehicles, overtakes and brakes for vulnerable road users such as pedestrians and cyclists, stops at traffic lights, and guides you seamlessly via sat-nav to your destination.

According to the hype you might have the impression that this world of self-driving cars is just around the corner.

Indeed, the Government has just announced that the Highway Code will be amended to pave the way for vehicles with automatic lane-keeping systems being approved for use at slow speeds in heavy motorway traffic.

Over the decades I have seen many prototype self-driving cars — from BMW, Mercedes-Benz, Volvo, Jaguar Land Rover — even a Nissan Qashqai.

Indeed, one of the first was at Honda in Japan. At its research facility in Takasu, on the northern island of Hokkaido, I whizzed around a test track, my hands bravely off the wheel.

More recently I was the first to try out an autonomous Jaguar Land Rover ‘pod’ — the day after Prince Charles had seen it in action at Warwick University.

And various autonomous car trials have been taking place in Coventry, Milton Keynes and elsewhere. 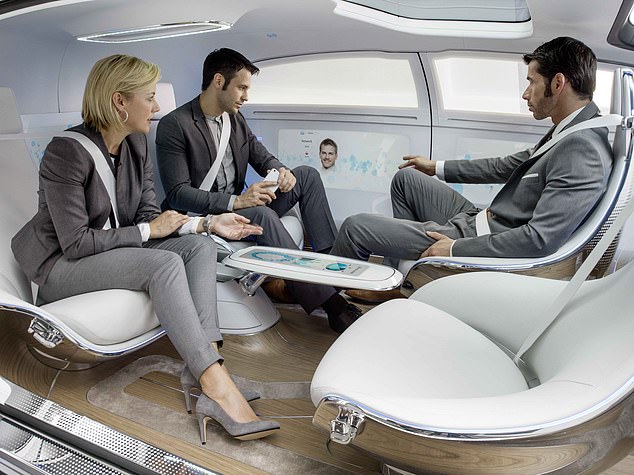 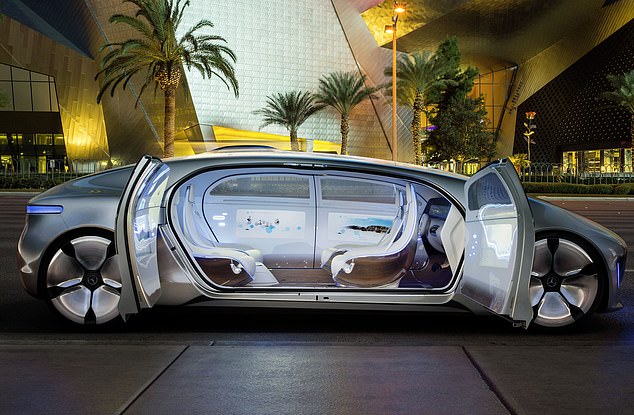 However, to hear government pronouncements, you’d be forgiven for thinking that soon we’ll all be surrendering control to the machine.

A former transport minister even told me that parents would soon be bundling their kids solo into driverless cars for the school run.

But car industry bosses will tell you the idea of everyone being carted around in self-driving cars is still a long way off.

So where are we really? Much of the technology needed to make cars drive themselves is already in use in the cars we drive now.

Cars can park themselves, steer to stay within a lane, and even overtake a car in front — though warnings sound if the driver’s hands are off the steering wheel for too long.

Top-of-the-range cars from Mercedes-Benz, BMW and other manufacturers have many autonomous safety features that kick in if they sense you are in danger — applying the brakes at junctions or if you are too close to the car in front.

Stagecoach is to road-test five sensor-operated vehicles on the Forth Bridge over 14 miles between Fife and Edinburgh.

But this is still a long way from all cars being totally self-driving. To clarify, the industry has a five level table of autonomy. The most advanced cars on the road are nudging Level 3. 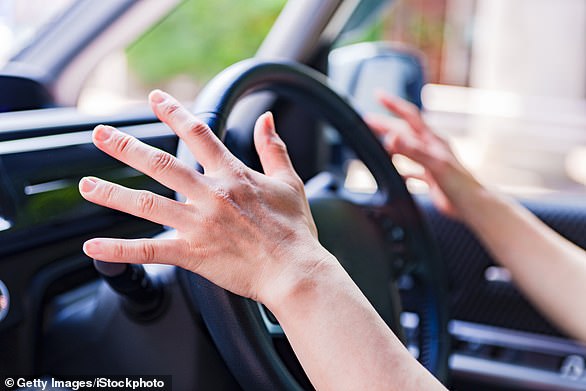 Level 1 Known as driver assist, it has been around for several years and includes cruise control 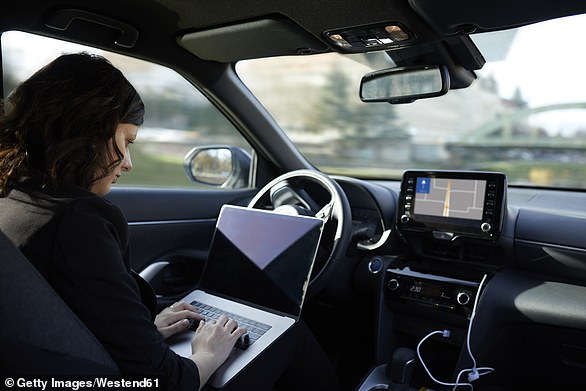 Level 3: Conditioning assistance — where the vehicle can all but take over, with the driver on stand-by.

Level 4: High automation — hands off the wheel in controlled areas only. 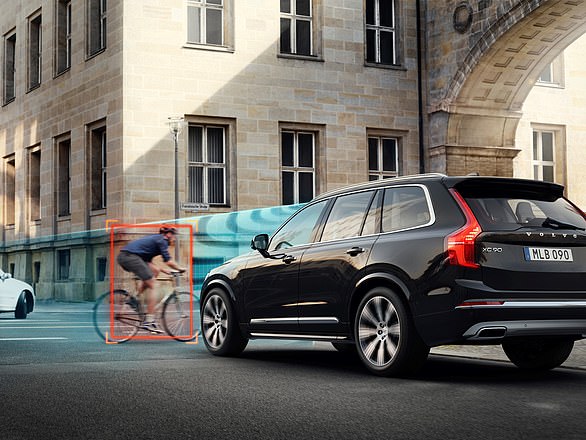 Level 5: Full automation — the holy grail: a ‘fully autonomous’ car that drives itself all the time until the driver decides to resume control.

Truth of it all

Changes to the Highway Code are just paving the way for when more advanced technology is certified for use.

Under the new rules, drivers will be able to hand over control to their vehicle — although they must stay in a single lane and keep to below 37 mph.

While they will be allowed to take their eyes off the road and use in-built screens they must be ‘ready to resume control in a timely way’ if prompted by the car. Using mobile phones in self-driving mode will be illegal. 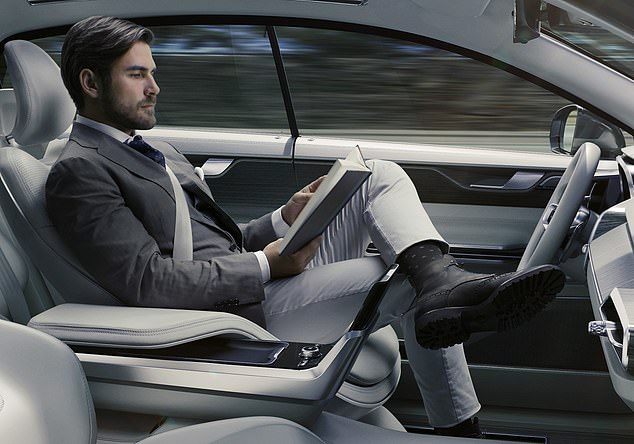 Under new rules, drivers will be able to hand over control to their vehicle – although they must stay in a single lane and keep to below 37 mph

Significantly, the driverless technology changes to the Highway Code will be made before full regulations are introduced in 2025.

The Department for Transport says vehicles will ‘be approved as self-driving only when they have met stringent standards’.

Safety is the key argument made for the vehicles. It is often said the most dangerous part of any car is the person behind the wheel.

Experts predict automated systems could prevent 47,000 serious accidents and save 3,900 lives over the next decade by reducing human error. It is the single largest cause of road accidents, and a factor in 88 per cent of crashes.

But there are moral and legal dilemmas. If a vehicle faces an inevitable crash and must choose between hitting a mother and a pram, a 64-year-old surgeon, or avoiding both by driving over a cliff with its driver and passengers, what should it do?

There have already been accidents. A motorist was killed in a self-driving car in 2016 when the Tesla Model S in which he was travelling in ‘Autopilot’ mode ploughed into a truck.

Pedestrian Elaine Herzberg, 49, was killed in a collision with a self-driving Uber in Arizona in 2018.

In 2015 cyber-security experts remotely hacked into a 2014 Jeep Cherokee to disable some of the 4×4’s engine functions and interior controls, leading to the recall of 1.4 million vehicles.

But Mike Hawes, Society of Motor Manufacturers and Traders chief executive, said self-driving tech will arrive incrementally over many years.

‘Technologies such as Automated Lane Keeping Systems (ALKS) will pave the way for higher levels of automation in future,’ he said.

‘It is exclusively for use in a limited environment, namely slow-moving traffic under 37 mph, on motorways with clear lane markings and without vulnerable road users.’

A study by insurers Tempcover (tempcover.com) found 80 per cent of motorists do not trust driverless cars, 44 per cent would never travel in one, and 36 per cent only would if there was a human driver as back-up.

Motorists without a driveway face paying up to £1,000 more each year to charge an electric car compared with those who have off-street parking.

The lack of a domestic charge-point means electric car owners will pay about £80 per month more to charge their vehicle at public charging points, according to electric car experts Electrifying.com.

With a third of drivers having no access to off-street parking, the disparity is creating a ‘two-tier nation’ of electric car owners, says the report. 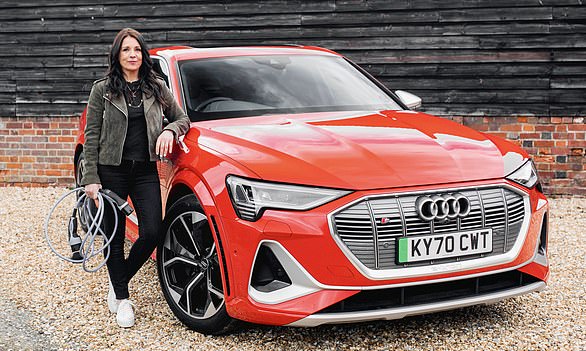 Steep: Public charging can be pricey for those electric car owners who don’t have off-street parking

Figures are based on a motorist driving a Volkswagen ID.3 for 10,000 miles per year. This would cost £13.75 per month when charging at home on a cheap night rate.

That’s compared with £91.75 per month on a public charge point at 50p per kWh, which represents the typical rate for a DC rapid charger at service stations or supermarkets.

The report also argues that it makes electric car ownership less attractive to drivers living in smaller properties within cities ‘which is the very place zero emission vehicles can make the biggest difference to air quality’.

Electrifying.com’s founder and CEO Ginny Buckley said: ‘As a country, we need to do better when it comes to the levelling up of electric car ownership.

‘If we want to bring everyone along on the electric journey, we need to ensure that the right infrastructure is in place — and at the right price.’