The actor, 64, who previously played the twelfth Doctor Who, lauded Ncuti Gatwa, 30, who is preparing to take on the role, in his speech after they posed for photos.

Peter, who looked suave in a black suit, was joined by the fifteenth Doctor Ncuti, who cut a dapper figure in a light blue suit, inside the DoubleTree by Hilton hotel.

Deserving: Peter Capaldi bagged the Outstanding Contribution gong and lauded future Doctor Who Ncuti Gatwa in his speech at the British Academy Scotland Awards on Sunday in Glasgow

In his speech, The Thick of It star said: ‘Ncuti knows this already, because I can see it in his heart and see him, but he’s about to discover how beautiful and wonderful and cosmic the human race can really be.

‘And also he’ll be able to spot an anorak in his peripheral vision, 50 yards, and he’ll have to find out what to do.’

Also along the winners were Sam Heughan, who secured the Audience Award in partnership with Screen Scotland, and Phyllis Logan, recipient of the Actress Television award for Guilt.

Peter previously praised Ncuti for being ‘absolutely amazing’, adding that he is an ‘amazing’ actor who will bring ‘depth’ to his former role. 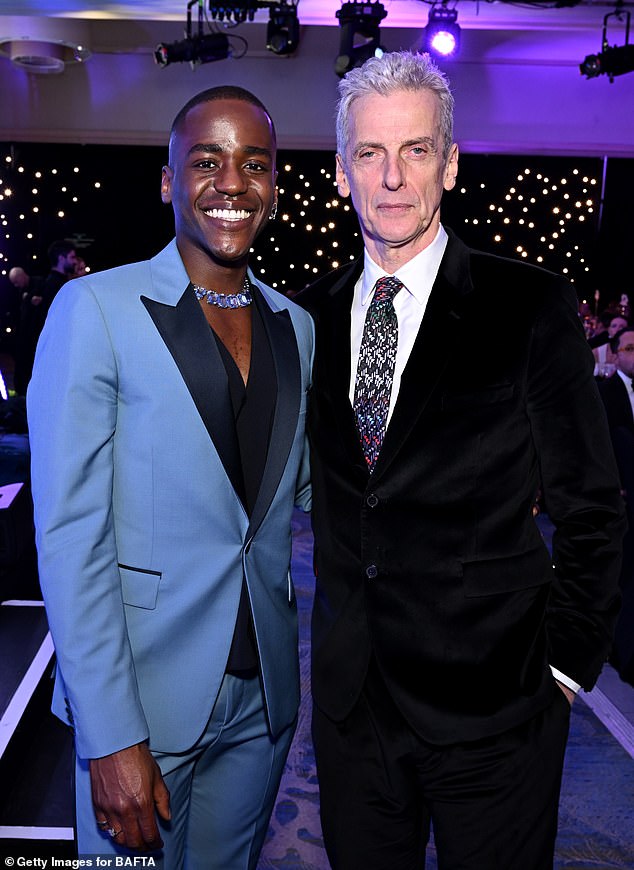 Suave: 30-year-old Ncuti, who has signed up to play the fifteenth Doctor Who, cut a dapper figure in a light blue suit as he posed with twelfth Doctor Peter, 64, at the event 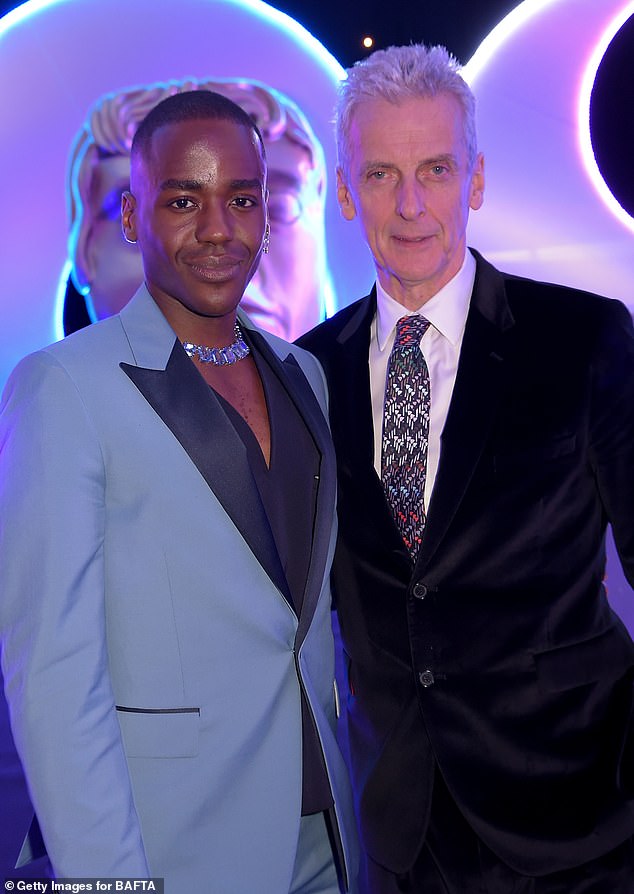 Pals: Peter looked ever-suave in a black suit and appeared to be in deep conversation with the Sex Education star inside the swanky DoubleTree by Hilton hotel 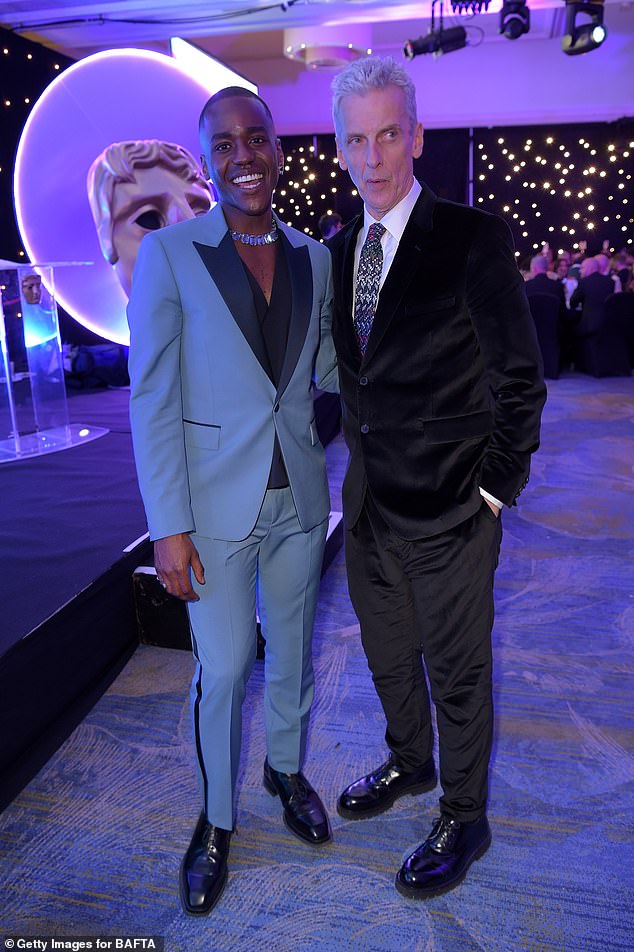 What a pair! Ncuti Gatwa (left) and Peter Capaldi (right) were pictured together for the first time at the British Academy Scotland Awards on Sunday in Glasgow

Earlier this year, he told BBC Scotland’s The Edit: ‘Doctor Who is a great part. You can’t lose with it. It’s a joy to play. And I think he’ll just really grab it with both hands and get on with it.’

Peter was cast in 2013 as the Doctor, succeeding Matt Smith in the role. He was succeeded by Jodie Whittaker in the 2017 Christmas special, Twice Upon a Time.

Doctor Who has already seen a number of overhauls ahead of its upcoming series, with a new logo unveiled, Russell T Davies returning as showrunner and Ncuti cast as the new Time Lord.

And the popular sci-fi franchise is also set to get a record-breaking new budget after the BBC signed an exciting new deal with Disney+, according to reports. 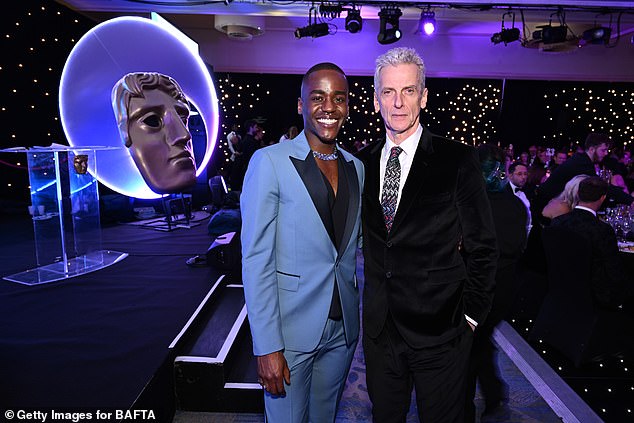 Compliments: Peter has previously praised Ncuti for being ‘absolutely amazing’, adding that he is an ‘amazing’ actor who will bring ‘depth’ to his former role 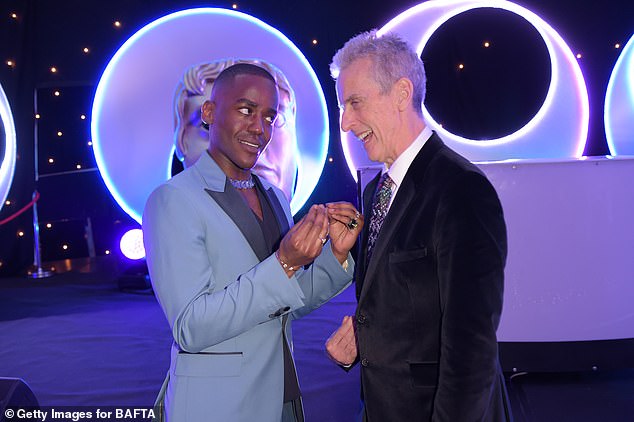 Approval: Earlier this year, he said: ‘Doctor Who is a great part. You can’t lose with it. It’s a joy to play. And I think he’ll just really grab it with both hands and get on with it’

Sources told Broadcast magazine the budget is set to increase from £1-3million per episode to a staggering £10million per installment when the show returns next year.

One source told the publication that the ramping up of production values and investment from Disney+ is an attempt to help the show find success in the US.

The reported budget would break BBC records and see Doctor Who become its most expensive series, surpassing the previous record-holder His Dark Materials, which had a budget of around £6million per episode due to its HBO collaboration. 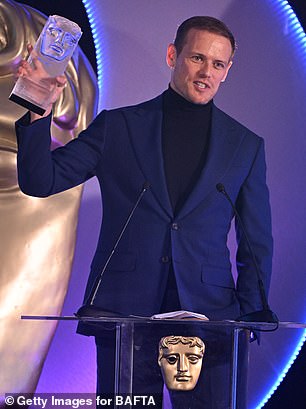 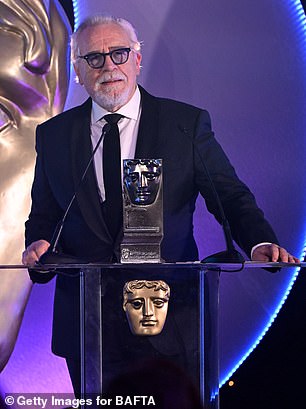 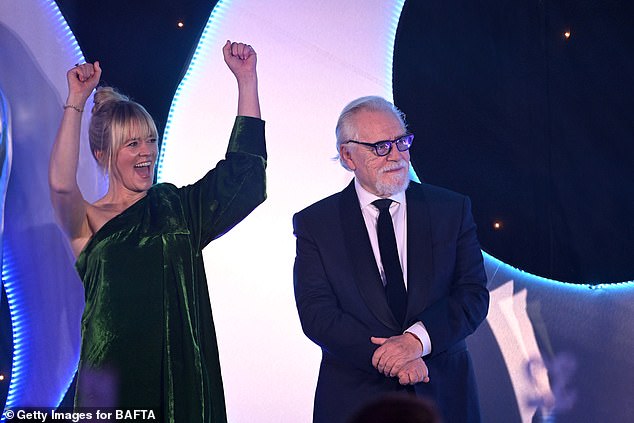 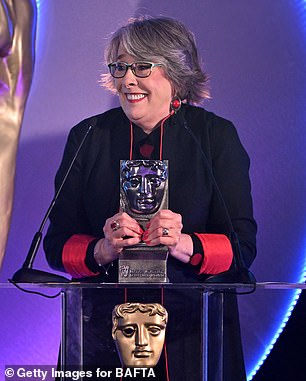 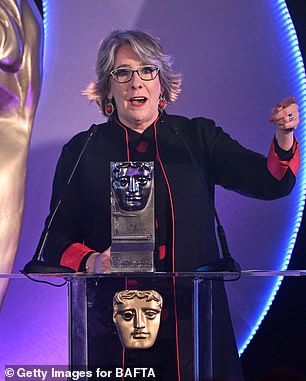 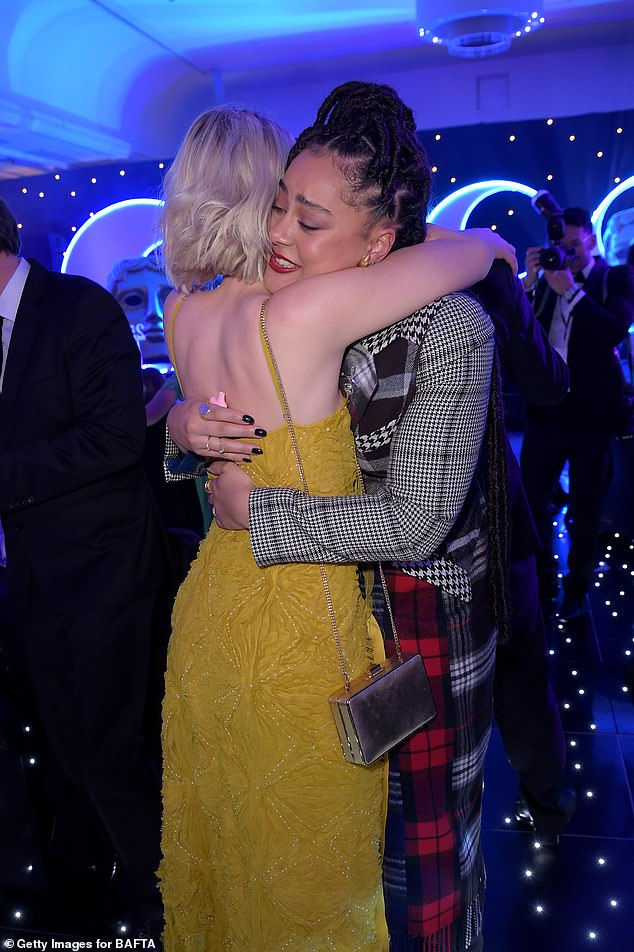 Pals: Saoirse Ronan and Izuka looked very happy to see one another 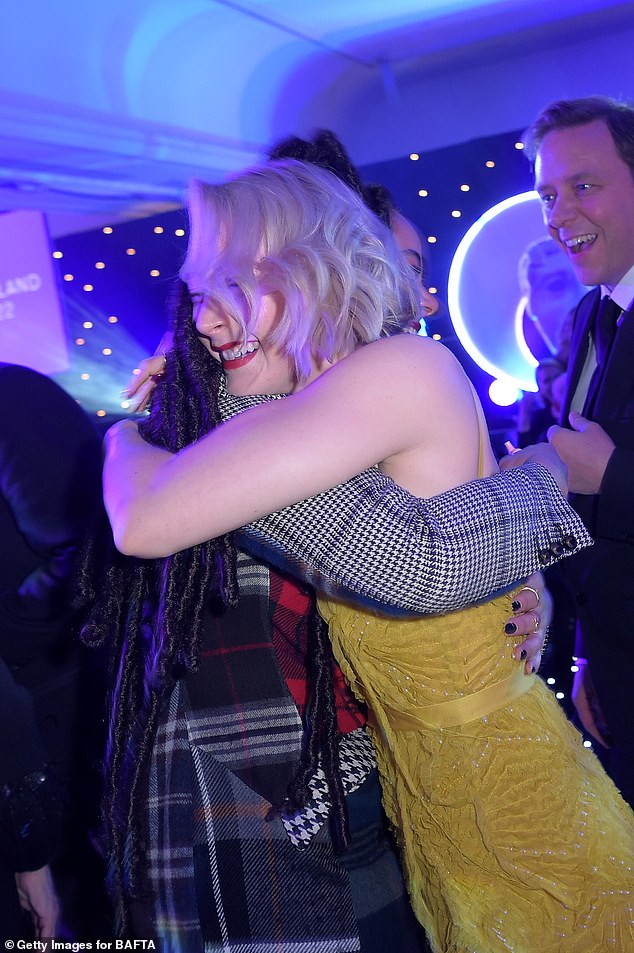 Disney+ is set to become the new global home for Doctor Who, with episodes from late 2023 premiering on both the BBC and the streaming service.

Russell T Davies said of the collaboration: ‘I love this show, and this is the best of both worlds – with the vision and joy of the BBC and Disney+ together we can launch the TARDIS all around the planet, reaching a new generation of fans while keeping our traditional home firmly on the BBC in the UK.’

As reports of more money being pumped into the show, the BBC have already secured huge names for its big 60th anniversary in 2023, including Neil Patrick Harris starring as a mystery villain. 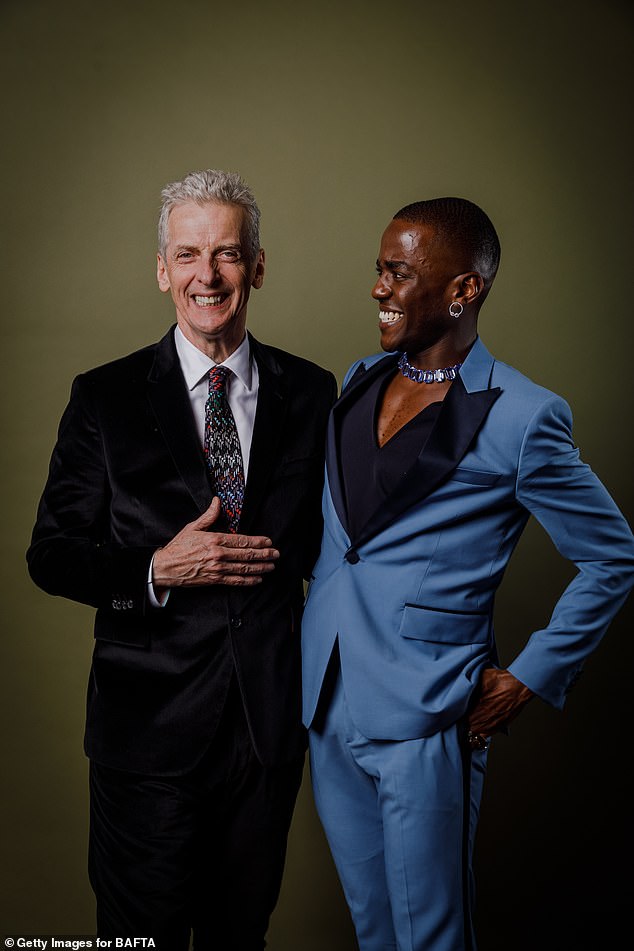 In their element: Ncuti beamed towards Peter as they took some more pro shots 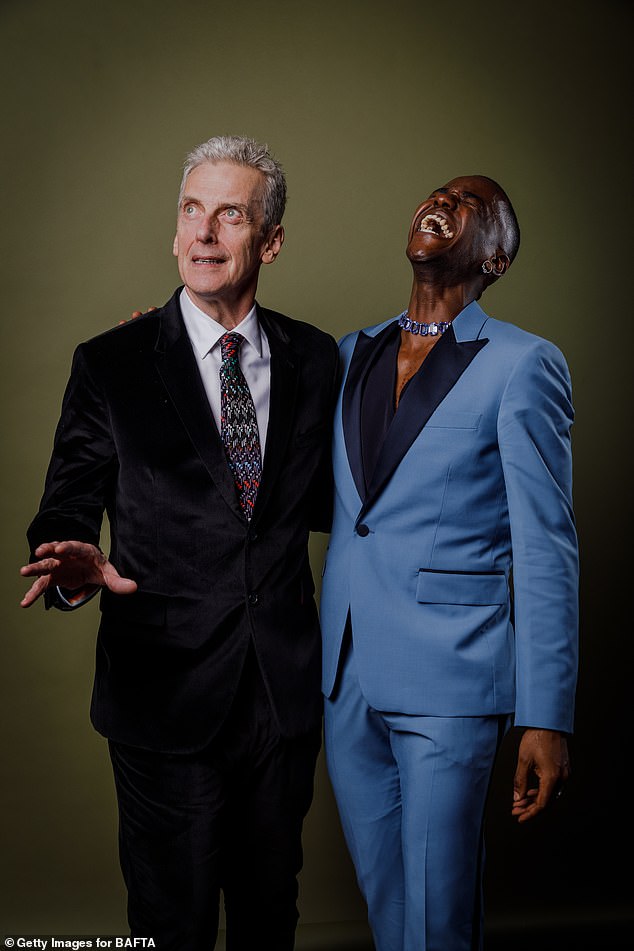 Hilarious: The pair continued to lark about in front of the cameras 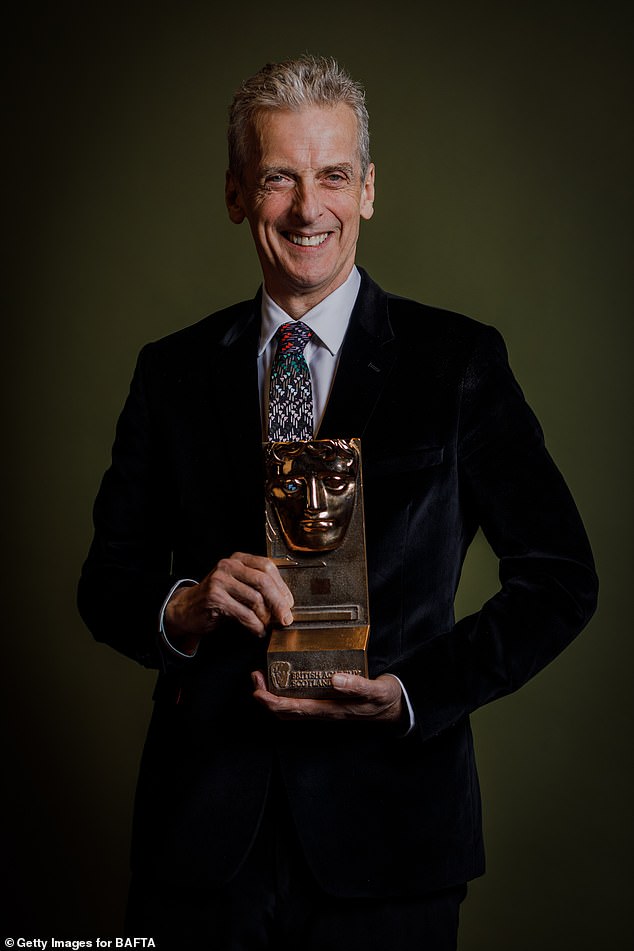 Delighted: Peter couldn’t wipe the smile from his face as he posed with the Outstanding Contribution to Film and Television award 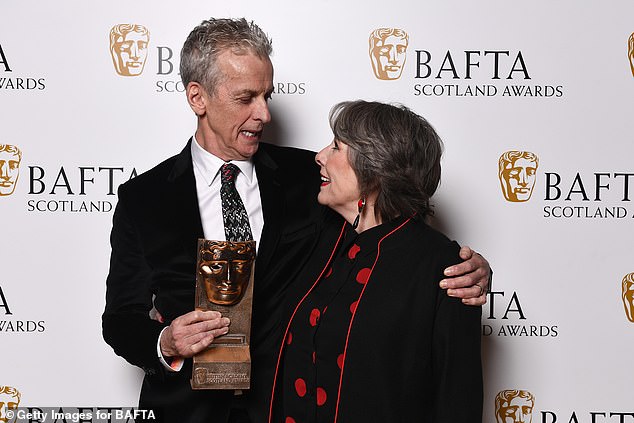 Friends: Peter chatted away with with the award presenter Phyllis Logan

The actor, 49, will play the ‘greatest enemy the Doctor has ever faced’, with fans convinced that he will take on the nostalgic villain The Toymaker during his guest-starring stint.

The budget comes as part of a huge overhaul which has seen Russell, 59, return as showrunner in a bid to save the show from falling ratings – 12 years after he stepped away.

Jodie’s final episode pulled in just 3.6million average viewers with a peak of 4million, according to overnight ratings. 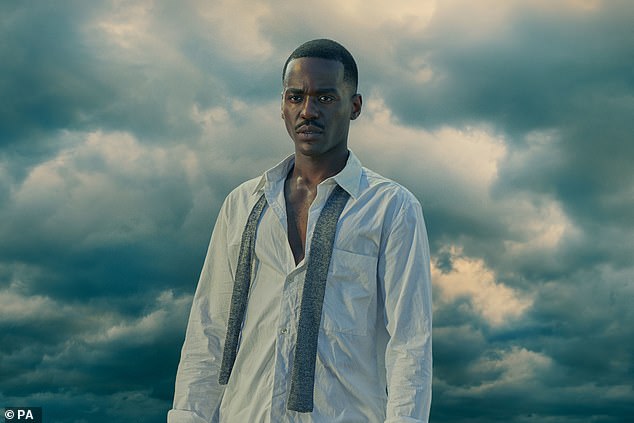 Big changes: Doctor Who has already seen a number of overhauls ahead of its new series, with a new logo unveiled and Ncuti being cast as the new Time Lord

Her last hurrah as the Time Lord proved more popular than the New Year’s special, which racked up just 3.2million average viewers with a peak of 3.4million.

However, audience numbers still remained far below the start of Jodie’s tenure as the Doctor in 2018, which pulled in a staggering 9million viewers.

As Jodie, 40, stepped back from the role after five years, David Tennant made his shock return as The Doctor in October’s much-anticipated epic. 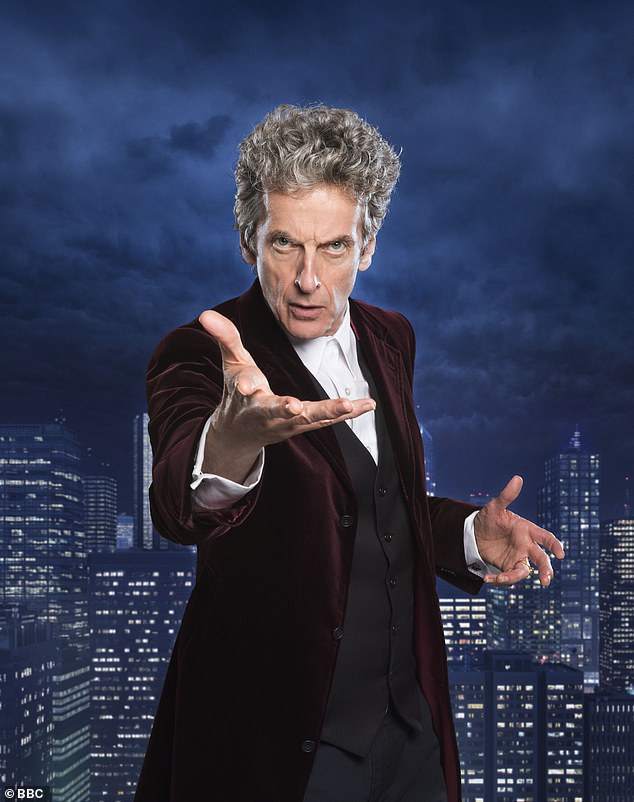 Talented: Peter was cast in 2013 as the Doctor, succeeding Matt Smith in the role. He was succeeded by Jodie Whittaker in the 2017 Christmas special, Twice Upon a Time

The Power of the Doctor was jam-packed with excitement as famous faces returned, Jodie bowed out after five years as the Time Lord, David made his return, and fans were given a first-look at Ncuti Gatwa as the 14th Doctor.

A number of former assistants – including Janet Fielding, who plays Tegan – and former Doctors Peter Davison and Colin Baker made guest appearances in the epic.