She’s vying for a coveted Best Actress BAFTA TV trophy for her critically lauded turn in her drama I Hate Suzie.

And Billie Piper gave her followers a glimpse at her getting ready process on Sunday afternoon, as she shared a clip in just a towel to her Instagram Stories.

The actress and director, 38, posted the clip from a bathroom as she wore her hair wrapped up in a towel and masked her modesty with another fluffy white covering.

Getting ready! Billie Piper gave her followers a glimpse at her getting ready process on Sunday afternoon, as she shared a clip in just a towel to her Instagram Stories

In the clip, Billie quizzed her pal on whether she will scoop the coveted gong, as she said: ‘Do you think I’ll win best actress?’

While Billie said: ‘Do you want me to win best actress?’

She quipped back: ‘Given the choice, yes I do want you to win best actress. I also think you, genuinely, are the best actress. And the thing I care most about is justice – and you!’ 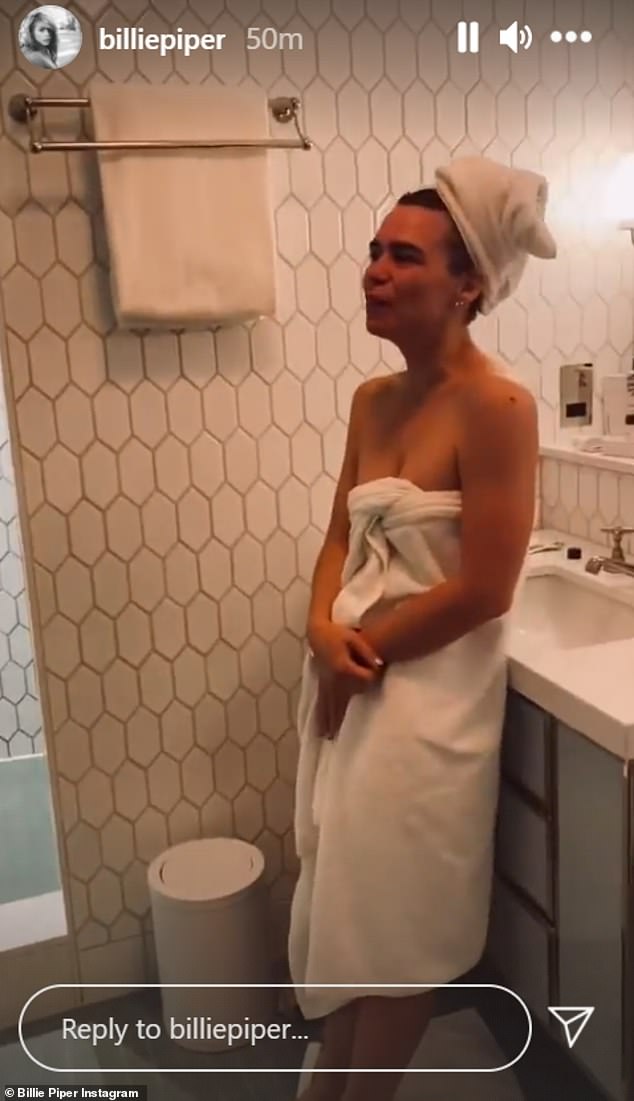 Behind the scenes: The actress and director, 38, posted the clip from a bathroom as she wore her hair wrapped up in a towel and masked her modesty with another fluffy white covering

Billie then moved on to if they’ll win best show, while her friend said: ‘I do not think we’ll win best show. I think a little domestic drama called The Crown will take it.’

When Billie asked if the show ‘deserved’ the award her pal gasped and the video ended.

Ceremony hosts Stacey Dooley and Vick Hope will introduce the hologram guests to those actually at the socially distanced ceremony.

Of her red carpet role, Vick revealed last week: ‘If you’re anything like me, over the last year your WhatsApp groups will have been nonstop about a recent episode or moment in the latest TV drama, documentary, reality or even cooking show.

‘It’s made me fall in love with TV all over again, and it’s because of this that I think that the Virgin Media BAFTAs feels extra special this year.

‘To be able to chat directly with the TV fans who have voted for their favourite Must-See Moment nominee and connect them to their favourite stars via holograms live on the red carpet will be a unique, once in a lifetime experience.

‘I’m so excited to bring a bit of this magic to the fans at home, it’s going to be an emotional one.’

COVID-19 restrictions mean TV fans can’t be in attendance on the red carpet as usual this year and some nominees won’t be able to attend because of filming bubbles.

All content will be captured by a live stream camera and will enable everyone at home to see the action unfold from the comfort of their living room.

Members of the public can watch a livestream of the red carpet and be a part of the glamour by visiting Virgin’s website from noon on Sunday.

They can also choose from a selection of digital red carpet outfits to help them get into the spirit of the Awards and get ready carpet ready.

If selected, they will be beamed onto the red carpet and could even ask a question to their favourite celeb with a video of the interaction being sent to the fan after.

Several of the year’s biggest TV moments will be celebrated on Sunday, with Diversity’s controversial BLM-inspired routine on Britain’s Got Talent, which sparked 24,500 complaints to Ofcom, featured in the must-see moment category.

The category, which is voted for by the public, also sees nods to Penelope being revealed as Lady Whistledown in Bridgerton and when Luke Skywalker appeared in the climax of The Mandalorian’s second season.

However it’s Small Axe which leads this year’s nominations with 15 nods.

The BBC One anthology film series, directed by Sir Steve McQueen, picked up six TV nominations and nine in the craft categories, including a nod for the Mini-Series gong alongside Normal People, Adult Material and I May Destroy You.

Small Axe – which features five films that tell stories about lives of West Indian immigrants in London from the 1960s to the 1980s – also picked up two Leading Actor nominations with John Boyega and Shaun Parkes both receiving nods.

Letitia Wright, who also starred in the series, is up for the Leading Actress prize, and she will face competition from Billie Piper (I Hate Suzie), Daisy Edgar-Jones (Normal People), Hayley Squires (Adult Material), Jodie Comer (Killing Eve) and Michaela Coel (I May Destroy You).

Elsewhere, I May Destroy You star Paapa Essiedu will go up against John and Shaun for the Leading Actor award, as well as Normal People actor Paul Mescal, Baghdad Central’s Waleed Zuaiter, and The Crown’s Josh O’Connor.

The Crown received 10 nominations – four for TV and six for the craft categories – including a nod for the Drama Series accolade alongside I Hate Suzie, Save Me Too and Gangs of London.

Other nods included This Country, Man Like Mobeen, Inside No. 9, and Ghosts for the Scripted Comedy prize, and siblings and This Country creators Daisy May and Charlie Cooper received nominations for the Female and Male Performance in a Comedy Programme gongs, respectively.

The ceremony will be hosted by Richard Ayoade, while Stacey and Vick take charge of the red carpet presenting.

MICHAELA COEL – I May Destroy You

I MAY DESTROY YOU

ONCE UPON A TIME IN IRAQ

THE SCHOOL THAT TRIED TO END RACISM

THEY SAW THE SUN FIRST

LOCKED IN: BREAKING THE SILENCE (STORYVILLE)