Beaches in The Bahamas are once again boasting sparkling turquoise water just days after the sea was ‘sucked away’ by Hurricane Irma.

A few days ago, a Bahamas resident revealed how his local beach on the tropical island group had lost all of its seawater.

His shocking video footage showed a muddy flat expanse where tranquil waters once were.

Because Hurricane Irma was so strong an incredibly rare weather phenomenon, known as a negative surge, caused it to suck water from its surroundings into the core of the storm. 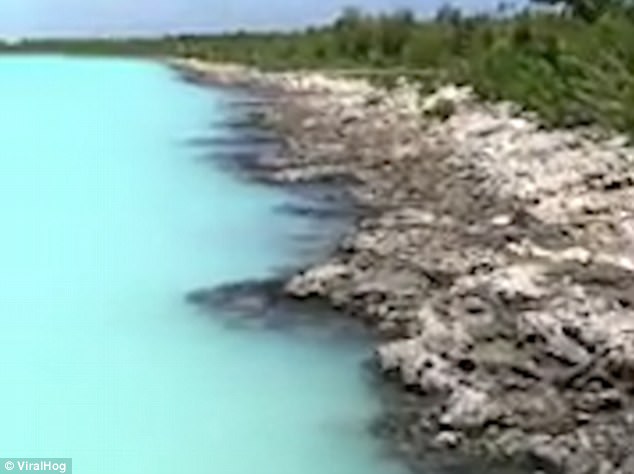 Just days later, turquoise sea water returned to the beach in the Bahamas

But days later the bright blue water has returned to the island’s shores.

The same man who filmed the first video posted an update after the water returned to his local beach.

‘This is the same dock as two days ago. The water is back to normal, there is my boat… it’s the same shoreline… this is how it normally looks guys,’ he said amid strong winds.

Having torn through the Caribbean, the British Virgin Islands and Florida over the weekend, the hurricane has now been downgraded to a tropical depression but has left a trail of destruction in its wake. 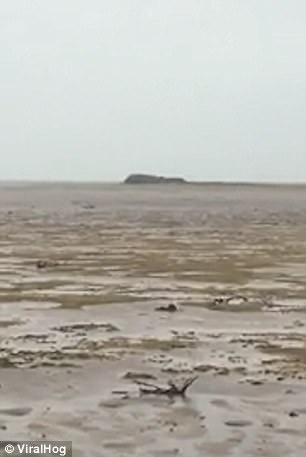 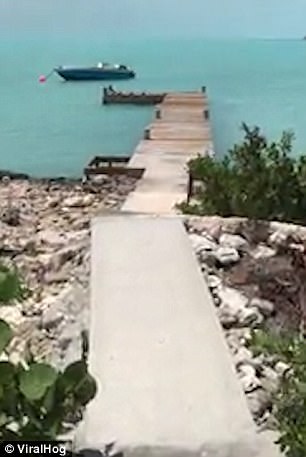 Hurricane Irma was so strong its negative surge sucked up water

Hurricane Irma was so strong it actually dragged water out of the sea with a negative surge.

‘Basically, Hurricane Irma is so strong and its pressure is so low, it’s sucking water from its surroundings into the core of the storm.

‘In the center of the storm, where there is extreme low pressure, water is drawn upward. Low pressure is basically a sucking mechanism — it sucks the air into it, and when it’s really low, it can change the shape of the surface of the ocean. As the storm draws water toward the center, it gets pulled away from the surroundings.’

Millions of Florida residents were without power Tuesday as the remnants of the storm spun northwest into the US mainland, drenching the region and causing rivers to overflow.

Most of the Sunshine State however appeared to have dodged forecasts of catastrophic damage despite dire early warnings.

But Irma’s overall death toll jumped to at least 40 after Cuba reported that 10 people had been killed there over the weekend.

Irma roared ashore as a powerful Category 4 hurricane when it hit the far southern Florida Keys on Sunday, tearing boats from their moorings, uprooting palm trees and downing power lines, after devastating a string of Caribbean islands.

By the time it hit the peninsula the storm had been downgraded, and by late Monday it had weakened further to a tropical depression.

Across the Caribbean, hard-hit island residents struggled to get back on their feet as Britain, France, the Netherlands and the United States increased relief efforts.

Floridians who spent an anxious night huddled indoors were venturing out Monday to survey the damage, which in most cases were not as bad as feared.

Now, for the people of the Caribbean and Florida, the painstaking task of starting over will begin.