Great British Bake Off star Luis Troyano has passed away from oesophageal cancer aged 48 following a private battle with the disease.

His agent, Anne Kibel, shared the sad news on Twitter on Tuesday, as she paid her respects to the 2014 runner-up and marketing manager who hailed from Stockport.

‘A fantastic man with a love of baking that saw him get to the finals of GBBO, write a wonderful book, Bake It Great and do so much more. Always in our thoughts.’ 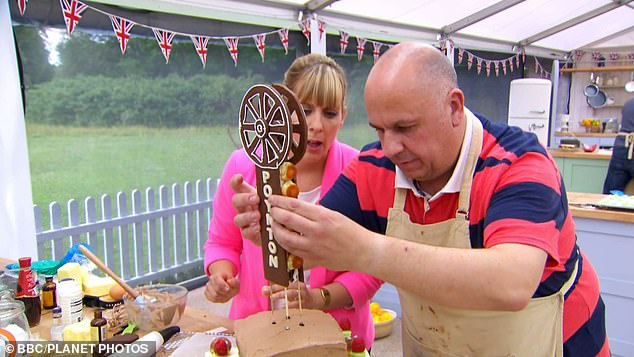 Talent: Luis famously made this incredible bake when he appeared on the show in 2014, it was a tribute to his hometown, the mining village of Poynton, Stockport

Luis’ passing comes more than a year after he underwent surgery to remove a life-threatening tumour, as he marked the occasion on Twitter in April this year.

In the tweet he thanked the medical staff at Salford Royal Hospital for removing the ‘awful tumour’ and told how he was ‘in their debt’.

He tweeted: ‘A year ago today I had my cancer surgery and an awful tumour removed that would have killed me.

‘So a huge thank you to the amazing teams @SalfordRoyalNHS @TheChristieNHS @gi_upper @BilalAlkhaffaf and all the other incredible people @NHSuk that saved my life. I’m in your debt.’

The official Great British Bake Off Twitter account also paid tribute, saying those who had worked on the show were ‘deeply saddened’ to hear of Luis’ passing. 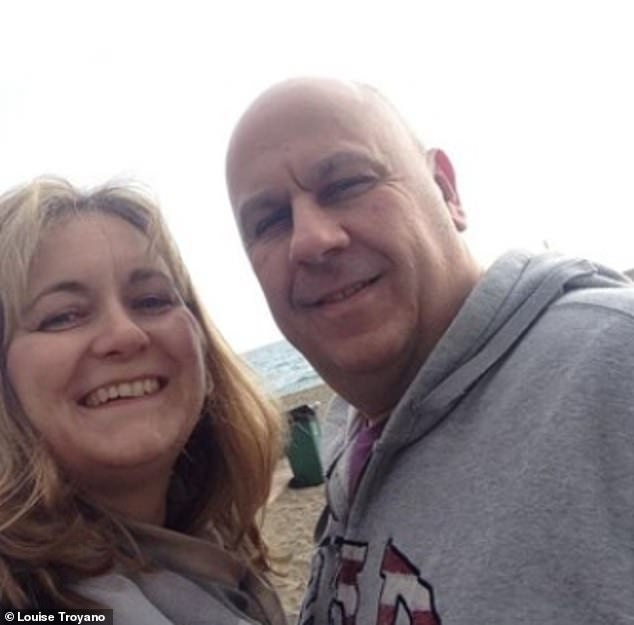 Love: Luis is survived by his wife Louise who wrote on a Just Giving page: ‘Your life was a blessing, your memory a treasure, you are loved beyond words and missed beyond measure x’

‘Always in our thoughts’L The sad news was announced on Twitter on Tuesday by Luis’s manager, Anne Kibel

A year on: Luis’ passing comes more than a year after he underwent surgery to remove a life-threatening tumour, as he marked the occasion on Twitter in April this yea

A statement read: ‘We are deeply saddened to hear that Luis Troyano has passed away. It was a huge honour and pleasure to have him in the Bake Off Tent for Series Five. Our condolences and thoughts go out to his friends and family.’

Luis earned himself a place in the show’s final in series five alongside Richard Burr and Nancy Birtwhistle, with Nancy going on to win.

The talented baker famously created an incredible edible tribute to his hometown, the mining village of Poynton, Stockport as one of his showstoppers. 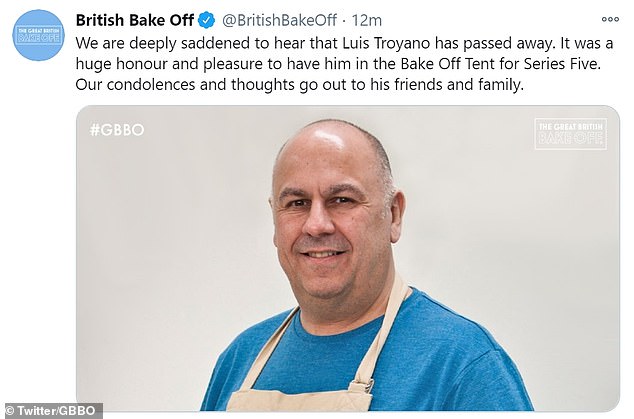 ‘A huge honour and pleasure’: The official Great British Bake Off Twitter account also paid tribute, saying those who had worked on the show were ‘deeply saddened’

He also made a caramel-gilded cake depicting The Cage at Lyme Park, telling Cheshire Life at the time: ‘I’m a proud Stockport guy. I have no shame in saying where I’m from.

‘I did The Cage mainly because it’s my wife’s favourite place to visit. I never expected that cake to get the response it did. When it aired, it went crazy with people going ‘Where is this and what is it he’s done?’

Amazing: Louise shared this lovely post on a Just Giving page she has created to raise money for Macmillan Cancer Support

Following his stint on Bake-Off, Luis made appearances on BBC Good Food and BBC Breakfast shows. He also released a cookbook in 2015 entitled Bake it Great.

Oesophageal cancer can be hard to spot because it doesn’t cause any symptoms in its earlier stages, and only becomes noticed once the tumour has grown.

Symptoms may include difficulty swallowing, persistent indigestion or heartburn, loss of appetite, weight loss, and pain in the torso, chest or back.

Survival rates are not high for oesophageal cancer, with only 12 per cent of people surviving for 10 years after a diagnosis.

A Just Giving page has since been created by his doting wife Louise to raise money for Macmillan Cancer Support.

She wrote: ‘Your life was a blessing, your memory a treasure, you are loved beyond words and missed beyond measure x

‘This page has been set up for Macmillan Cancer Support but in truth, Luis gave a big thank you to everyone involved in his care.’

‘But more importantly a massive thank you to all the amazing professionals who really did try their absolute best for me, showed me absolute compassion and gave me more time than what was seemingly possible. I thank you sincerely.’

He previously told Food And Drinks Guide how the show had changed things for him.

He said: ‘The GBBO totally changed my life. As well as being given the opportunity to write a book, I now also bake for a living, which is simply amazing. As far as baking goes, I can certainly bake a lot faster now than before the GBBO!’

In 2014, Luis Troyano opened his first bakery in his Cheshire hometown, called The Hive Bakery, which sat on the site of a former Greggs.

In April 2015, Luis was announced as the patron of Beechwood Cancer Care Centre.

According to the Manchester Evening News, Luis had lost his dad to cancer when he was aged 16 and had said he wished there had been a facility like Beechwood when he was going through his own loss.

He said at the time: ‘I have lived in Stockport all my life and wanted to support a charity that was close to home.

‘It feels great to be a patron at Beechwood. There was nothing like Beechwood when I lost my dad and it was a tough time.

‘My time on The Great British Bake Off has been life changing and I feel honoured to support Beechwood.’

RIP: A host of other Bake Off stars have been sharing their sadness following the news