Pressure, what pressure? Ballymena batsman John Glass hits a staggering SIX SIXES off the final over after his side needed 35 from the last six balls to complete remarkable run chase… and it sealed the LVS T20 Trophy!

Ballymena smashed six sixes off the final over to secure a remarkable last-gasp triumph by just one run against Cregagh to secure the LVS Twenty20 Trophy.

Victory was all but mathematically secure for Cregagh, with 35 runs needed off just six balls, but captain John Glass hit six successive maximums to complete a staggeringly unlikely run chase.

Gibson Park was left stunned by Glass’ heroics, which took Ballymena from 112-7 after 19 overs to 148, and Glass himself from 51 to a superb, match-winning 87 not out. 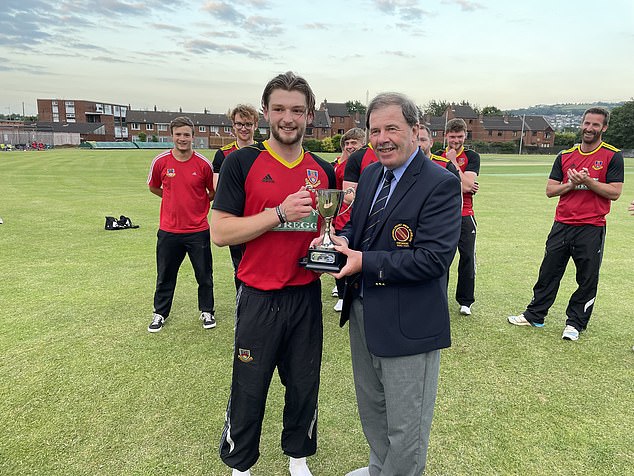 The captain John Glass (left) hit six sixes in the final over, with 35 needed from the last six balls

Cregagh, on their home ground, had previously been the dominant side for much of the match. Their opening batsmen Jonny Moore (52) and Jay Hunter (40) got them off to a good start, with Moore reaching his half-century in just 46 deliveries.

Ballymena duo Michael Glass and James Kennedy could not post big scores, leaving stand-in skipper Glass – who eventually won man-of-the-match – with a near-impossible task; but he cut loose and cleared the ropes with ease to grab the win.