Alarming footage has emerged of elderly COVID-19 susceptible shoppers using the self-service checkouts at a Sydney Woolworths – where a worker had tested positive to the virus after leaving lockdown in Melbourne.

Just hours after NSW Premier Gladys Berejiklian said she feared a second wave could hit her state, the worker at Balmain Woolworths, in Sydney’s inner west, was found to have the virus.

He had contracted COVID-19 in Bangladesh and travelled to Melbourne – but flew up to Sydney after two weeks in hotel quarantine – and immediately resumed his job.

The store was deep cleaned on Wednesday night and 50 of the man’s colleagues are now in isolation.

While there is no suggestion the women were at risk of contracting COVID-19, the footage confirms what Ms Berejiklian is concerned about – Australians getting back to normal life, doing their groceries – and thinking they can no longer get the virus.

The decision to keep the store open has outraged locals, with one woman taking to a popular Facebook group and telling others she had called Woolworths to complain.

The spread of COVID-19 out of Melbourne hotspots could be potentially deadly, with people in other states and territories across Australia already re-acclimatising back into normal life 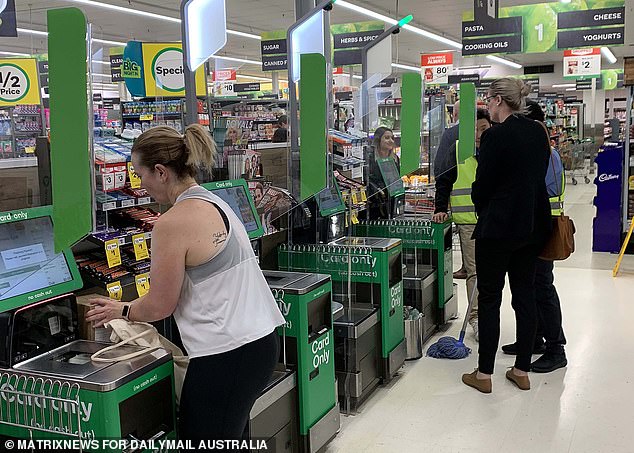 A worker at Balmain Woolworths, in Sydney’s inner west, was confirmed to have the virus on Thursday

‘I have just spoken to Woolworths head office who told me that the store was closed and when I assured them it wasn’t she checked the details,’ one woman wrote.

‘I was then told the store was still open because it had been deep cleaned last night so it could remain open.

‘My argument was that if this happened in a school it would be closed for two days while it was deep cleaned. Why would this not happen at a grocery store?’

Supermarket bosses and cleaning teams gathered together and discussed how best to deal with the crisis.

He tested positive on his fourth day in hotel quarantine, but 10 days later was cleared to fly home to Sydney on Jetstar Flight JQ510 on June 26.

NSW Health is contacting travellers who sat in the same row and in the two rows in front and behind of him on the flight.

On his second day back at work on June 28 the man’s manager noticed he had flu-like symptoms and sent him off to get checked. Again he tested positive.

The positive test has only furthered concerns about the re-emergence of COVID-19 nationally, off the back of Victoria locking down 36 suburbs across Melbourne. 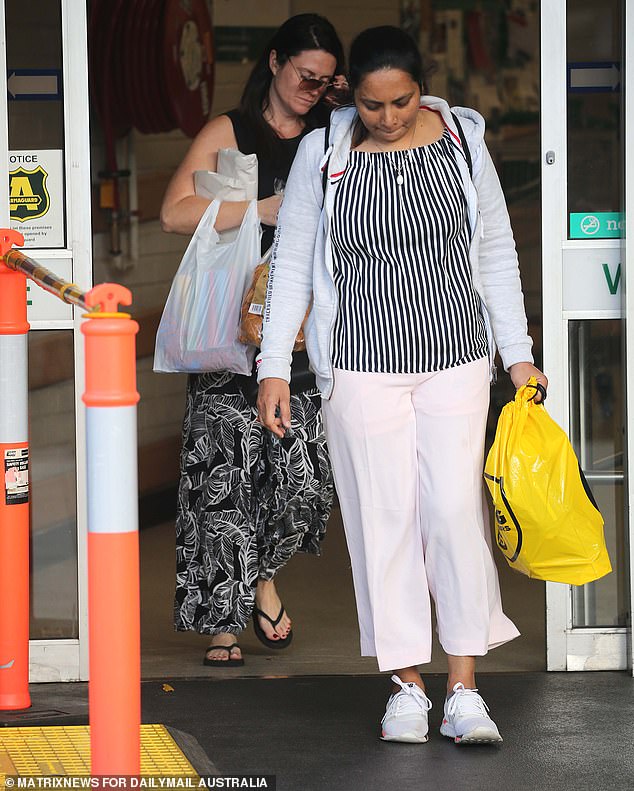 The store was deep cleaned on Wednesday night and 50 of the man’s colleagues are now in isolation, with shoppers returning to the store on Thursday (pictured) 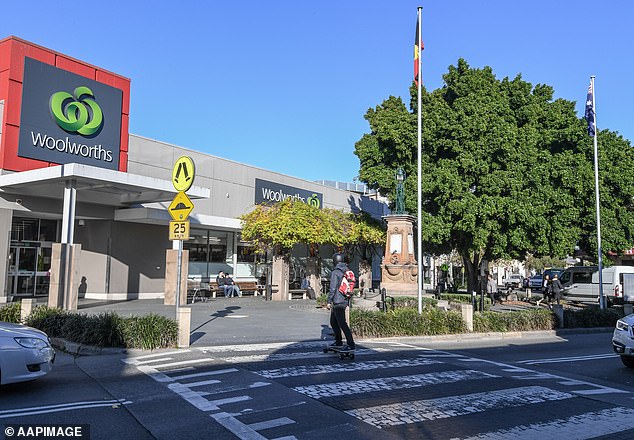 The decision to keep the store open has outraged locals, with one woman taking to a popular Facebook group and telling others she had called Woolworths to complain 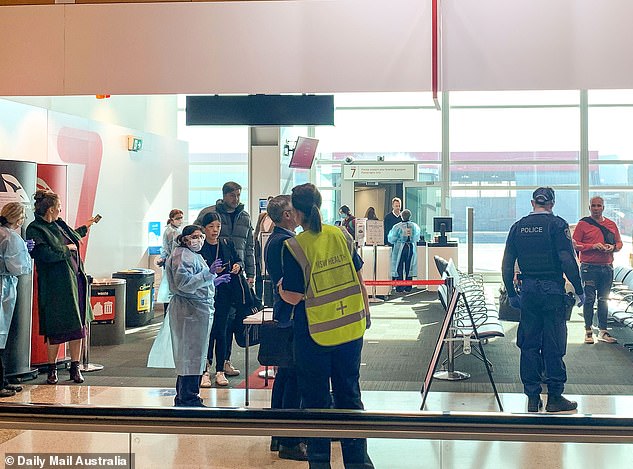 A large team of police officers, nurses and airport staff began greeting new arrivals to Sydney from Thursday, on the hunt for visitors from Melbourne’s hotspot suburbs

Victorian Premier Daniel Andrews has also called for an inquiry into his state’s hotel quarantine program, after allegations of staff falling asleep on the job and sleeping with returned travellers were revealed.

But NSW chief health officer Kerry Chant said the release of the man from hotel isolation had been ticked off by medical experts.

‘If you are symptom free 72 hours and it’s been at least 10 days since your onset of your symptoms than you are deemed non-infectious,’ Dr Chant said.

‘The reports from Woolworths was there wasn’t really any overcrowding… even though it’s quite a compact store.’

Dr Chant said the man worked in the self-serve checkout section of the store but was considered to be a ‘low-level’ of infectious.

The man had worn a mask on his flight from Melbourne to Sydney, but there are still concerns he could have infected those sitting near him.

Anyone onboard that plane will be contacted by NSW Health. 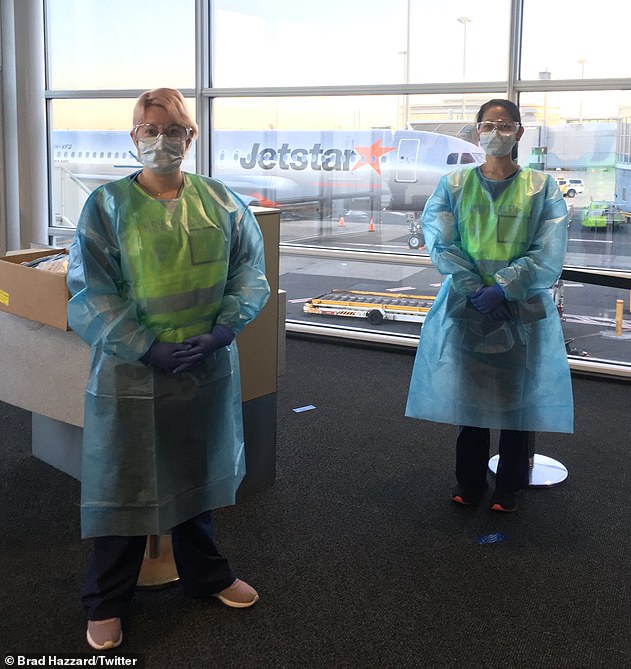 Five people were caught at Sydney Airport arriving from those hotspots, while one woman who was awaiting COVID-19 testing arrived from Melbourne via train

NSW Health began testing passengers arriving into the state from Victoria from 12am on Thursday.

While the border remains open, anyone who lives or has visited 36 suburbs identified by the Victorian government as COVID-19 hotspots is banned from entering NSW.

Five people were caught at Sydney Airport arriving from those hotspots, while one woman who was awaiting COVID-19 testing arrived from Melbourne via train.

Passengers arriving in Sydney from Melbourne told Daily Mail Australia of their shock at the lack of questions being asked before departure.

They said the first they had been quizzed about visiting a hotspot was in Sydney, by which point they could have potentially infected a plane load of people.