Marine pollution is a big problem, but it’s not always an oil spill or toxic chemicals dumping into the ocean: sometimes it’s as simple as a burger wrapper blowing into the bay

The goal is to snatch trash in the harbor before it floats out into the Chesapeake Bay and the Atlantic Ocean.

Costing up to $800,000, the customizable contraption has intercepted more than three million pounds of garbage from the harbor since 2014.

River currents turn water wheels that power a conveyer belt feeding trash into the floating garbage interceptor, which deposits into a Dumpster that is emptied later

It’s home to a WWII submarine, the USS Constitution and other sea craft.

‘When it rained,’ Kellett told The New Yorker in 2019, ‘there was a river of trash flowing down’ into the harbor.

‘There should be a way to stop this trash before it spreads out,’ he added. ‘I did some research to see if there was anything out there to tackle that job, and I found nothing.’

Kellett went old school with his solution, combining the basic principle of a water wheel with the design for a hay baler to create Mr. Trash Wheel, a 50-foot machine weighing nearly 100,000 pounds. 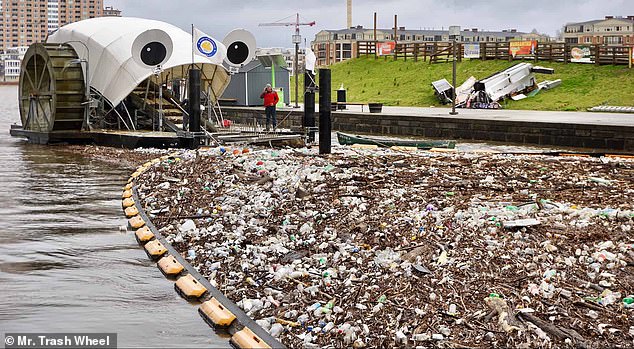 Since launching in 2014, Mr. Trash Wheels has intercepted more than three million pounds of garbage

The Chesapeake River’s current rotates the water mill, powering a system of pulleys that in turn run a large conveyor belt with rake-like ‘teeth’ to scoop up floating soda cans, plastic bags, styrofoam plates, cigarette butts and other detritus.

Though he appears to float on the water, the machine is stationary.

Kellett can turn on the pumps via his smartphone and check on his invention 24/7 via webcam. 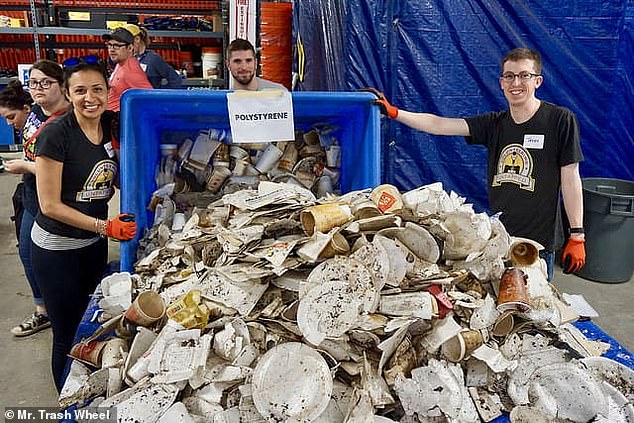 Since launching in 2014, Mr. Trash Wheels has intercepted more than three million pounds of garbage, according to CNet.

There’s also been some unusual input, including a beer keg, guitar and a napping ball python.

After the first major rainstorm, Mr. Trash Wheel ate 19 tons of garbage in one day in April 2015.

He’s added some family members, including Professor Trash Wheel (the first female interceptor), the non-binary Captain Trash Wheel and most recently, Gwynnda The Good Wheel of the West, which debuted April 2021 at the mouth of the Gwynns Falls in west Baltimore.

Gwynnda bigger than Mr. Trash Wheel, With thick black lashes over her giant eyes, and is expected to scoop up over 300 tons of waste a year, reported WYPR.

Kellet partnered with the nonprofit Abell Foundation to fund the project and has also enjoyed support from The Waterfront Partnership of Baltimore.

The MrTrashWheel.com website tallies detailed information on the kind of refuse that the machines have pulled from the harbor. 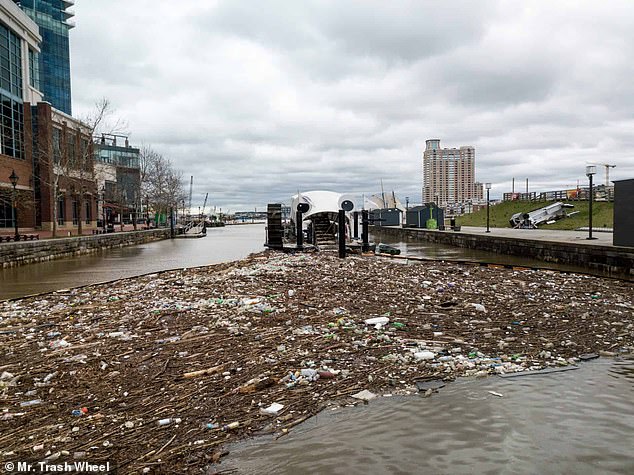 The goal is to to scoop up litter before it makes its way out to the Chesapeake River or Atlantic Ocean, says Mr. Trash Wheel creator John Kellett

‘We know that we’ve pulled out over a million styrofoam containers from the harbor,’ Adam Lindquist, director of Waterfront Partnership’s Healthy Harbor Initiative, told CNet.

‘That’s the sort of information, data, and photos that we share with our elected officials to let them know just how big of a problem this is.’

Despite their undesirable vocation, the Trash Wheel clan have become Baltimore attractions in their own right, with a profuse social media presence and a line of t-shirts and beer.

‘Over the last few years, I’ve been getting calls and e-mails from all over the world,’ Kellett told the New Yorker. ‘A Japanese film crew visited last week. ‘I’m still kind of in shock about how much attention it has garnered. Never in my wilbodest dreams would I ever have thought that this idea I sketched on a napkin would lead to all this.’

There are plans to install versions of Mr. Trash Wheels in other port cities, including Milwaukee, Honolulu, San Francisco and Atlanta.

Depending on its size, a Trash Wheel costs between $400,000 and $800,000, including assembly, installation and personalization. 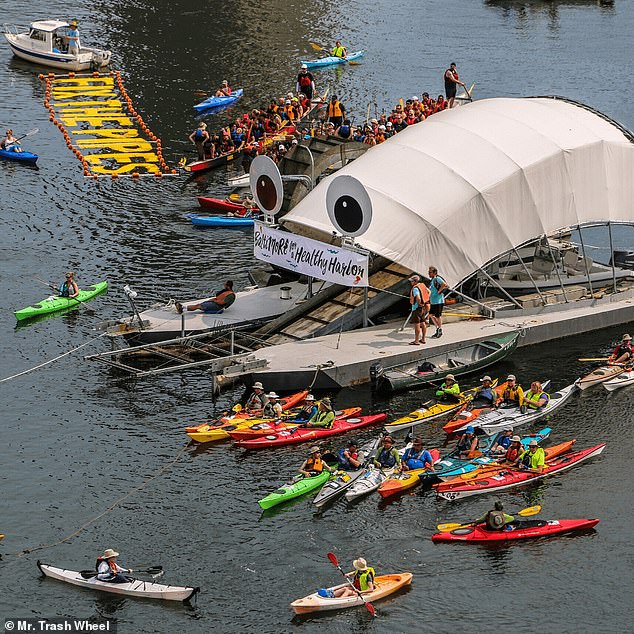 Depending on its size, a Trash Wheel costs between $400,000 and $800,000, including assembly, installation and personalization

Using a $1.7 million grant, Newport Beach, California, expects to install one by late 2021, according to The Wall Street Journal, though the pandemic may have slowed those plans.

Kellet says couldn’t have envisioned how popular the Trash Wheels would become, but he knows much more must be done to protect city waterways.

‘I don’t think of the Trash Wheel as a solution,’ Kellett told the New Yorker. ‘We are treating a symptom of the disease. It’s not a cure.’